Turkish officials have vowed to take legal action against the French satirical magazine Charlie Hebdo over a caricature of President Recep Tayyip Erdogan that they said spread “cultural racism and hatred”.

An investigation launched by Ankara’s chief prosecutor into the cartoon is the latest phase in a worsening war of words between Mr Erdogan and his French counterpart Emmanuel Macron, who have clashed over everything from France’s actions against Islamist extremists to the two countries’ strategic rivalry in the Mediterranean.

Published on the front cover of Charlie Hebdo’s latest issue, the image depicts the Turkish president and contains an apparent reference to the Prophet Mohammed, who is second only to God in importance in Islam.

Mr Erdogan, a devout Muslim who has also sought to cast himself as a leader of the global Islamic community, said that he was upset and angry “not because of the disgusting attack on me” but because of the “vulgarity against our prophet whom we consider dearer than our own lives”. 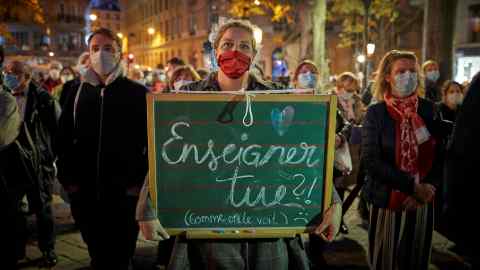 The Turkish president, who said he had deliberately avoided looking at the cartoon, added: “We know that the target is not me, but the values that we are defending . . . It is our honour to take a sincere stand against attacks on our prophet.”

Turkey’s justice minister, Abdulhamit Gul, told reporters in Ankara that Turkish law contained measures for putting sanctions on those who launched attacks on “our country and our values” and said that authorities had begun “necessary steps” in response to the cartoon.

Officials in Paris said that the French state, which has long enforced a strict policy of secularism in public life and religious freedom in private, stands for absolute freedom of the press and that Mr Macron has nothing to do with the caricatures.

Gabriel Attal, French government spokesman, said after a cabinet meeting on Wednesday that France had benefited from a united European stand on the dispute with Turkey and would “never give up its principles and values”, in spite of “attempts at destabilisation and intimidation”. He also said France was at increased risk of terror attacks in recent days because of such “hate speech”.

Charlie Hebdo, and the French tradition of satirical cartoons, is at the centre of the escalating row between Paris and Ankara over Mr Macron’s attempts to curb violent Islamist extremism and stop terror attacks.

The latest such attack was the beheading less than two weeks ago in a Paris suburb of school teacher Samuel Paty by an 18-year-old Chechen refugee. Mr Paty was targeted after he had shown some of the magazine’s caricatures of the Prophet Mohammed to his class in a lesson on freedom of speech.

Eight Charlie Hebdo staff were killed in January 2015 when Islamist gunmen stormed its offices in Paris.

Mr Macron has made two recent speeches, the second at a ceremony paying homage to Paty, condemning radical Islamist violence and championing secularism. The reaction from some leaders of Muslim-majority countries has been hostile.

Mr Erdogan has joined Iran, Qatar and Pakistan in calling for a boycott of French products, and said the French president needed to seek “mental treatment”.

France, angered by Mr Erdogan and Turkey’s delay in sending official condolences for the assassination of Mr Paty, recalled its ambassador from Ankara in protest. Officials in Paris also said the boycott call was illegal under Turkey’s customs union agreement with the EU.

The dispute has stoked deeper tensions between the two nations over policy in Syria, Libya and the eastern Mediterranean, where France has backed Greece in a dispute with Turkey over maritime rights.

It has also contributed to the woes of the Turkish lira, which has fallen about 28 per cent against the dollar this year. The currency has hit a succession of record lows in recent days as concerns about Mr Erdogan’s management of the economy have combined with disquiet at Ankara’s deteriorating relations with the west and the risk that Turkey could face EU or US sanctions.