Turkey has eased curbs on foreign investors’ ability to trade the lira as part of a major shake-up of the country’s economic policy team.

The banking regulator said on Wednesday it would reduce restrictions on derivatives transactions between local banks and foreign investors, in which the lira is traded for foreign currencies such as the dollar, euro and yen.

Derivatives such as swaps and options are a common way traders are able to bet on a currency without having to trade it outright.

Earlier this year, Turkey placed tight limitations on derivatives in a move analysts said was aimed at making it very difficult to bet against the currency. It had the side-effect of effectively freezing the market — something that was deeply unsettling for many local and foreign investors. 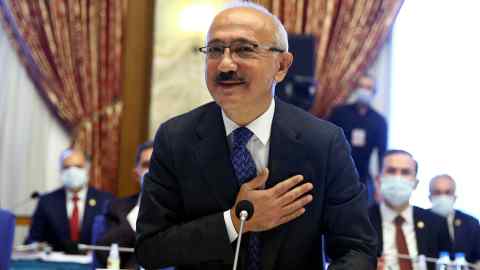 Wednesday’s move marks the second time the restrictions have been eased, after a similar decision in late September. It comes after President Recep Tayyip Erdogan abruptly replaced Turkey’s central bank governor over the weekend, and this week accepted the resignation of his son-in-law Berat Albayrak as finance minister.

The shake-up comes as the lira has plunged 27 per cent so far this year to a record low, reflecting concerns about Turkey’s handling of its economy and financial markets. The Turkish central bank’s reluctance to raise interest rates even as inflation has remained high and the currency has been under persistent pressure has been a key driver of the decline, analysts say.

Enver Erkan, an economist at Istanbul-based Tera Investments, described Wednesday’s decision by Turkey’s banking regulator as a step towards “normalisation” that would ease “the squeezed liquidity in the market”.

“This will also increase investor confidence before the November 19 [central bank meeting] in which transition to orthodox monetary policy and interest rate hike is expected,” he said.

The lira edged up on Wednesday to 8.1 to the US dollar, marking a further improvement from the record low of 8.5789 it hit earlier this month.