iShares MSCI Turkey ETF (TUR) provides investors with the opportunity to gain direct exposure to a broad range of publicly-listed Turkish companies. TUR is an exchange-traded fund whose (non-cash) holdings consist solely of Turkish stocks. Investors can purchase shares in TUR to express a bullish view on the Turkish economy. The ETF is listed on NASDAQ, and its share price is denominated in U.S. dollars (not Turkish lira).

It is the Turkish lira, the official currency of Turkey, that has become a serious talking point in global macroeconomics this year. The lira has declined considerably against currencies such as the euro, U.S. dollar, and indeed all other G10 currencies. The chart below illustrates the performance of both USD and EUR (two world reserve currencies) against the lira (abbreviated as TRY)

In the chart above, we can see that USD/TRY (the red line) has risen by over 40%, while EUR/TRY has risen by over 50%. These moves reveal a significant level of capital exiting Turkey. Typically, when a country’s currency falls in value (in terms of international FX), the value of its domestic assets rise (at least when denominated in the domestic currency). This is because stronger foreign currencies make these assets “cheaper”. For example, the chart below illustrates SPDR S&P 500 ETF Trust (SPY), with the red line, while the black line illustrates EUR/USD. The strength of the euro (in U.S. dollars) is positively correlated with U.S. equities (for which SPY serves as a reasonable proxy).

Occasionally these correlations can break. While the positive correlation shown above is rather clear since late March, it was in late February and early March 2020 that the euro spiked as a result of mechanical factors that broke this correlation. What likely happened is as follows: as U.S. equity prices collapsed, foreign capital that was invested in the United States was quickly repatriated back into the euro area as U.S. equity sentiment dropped sharply. Short-EUR carry trades were also quickly unwound as U.S. interest rates were cut aggressively to help stimulate the economy and loosen funding markets.

Therefore, in late February and early March, we witnessed a phenomenon whereby both USD fell and U.S. equities fell simultaneously, even if only for a brief period. Since the start of 2020, EUR/USD has risen by circa 6% at the time of writing, whereas SPY has risen by circa 8%. In other words, overall, we see the correlation is positive while U.S. equity sentiment has been strong.

Meanwhile, USD/TRY has risen by over 42% YTD, while XU100 (an index that is based in lira terms) has risen by less than 3% YTD. This significant deviation suggests broad portfolio outflows from Turkey. XU100 is still below its January 2020 highs, and yet USD/TRY has ascended aggressively. The disconnect reveals strong pessimism and ultimately a lack of confidence in the Turkish economy. TUR, an ETF denominated in USD, has therefore languished (see the chart below).

TUR has fallen by over 30% YTD. Note that TUR offers a trailing 12-month yield of 2.26% (as at the time of writing), although the expense ratio for TUR is quite high at 0.59%. That is, high at least from the perspective of funds such as SPY, with which most American and international investors are familiar; SPY’s expense ratio is less than 0.1%. To invest in TRY would be to take a rather contrarian bet primarily on a return of foreign capital to Turkey.

This is a contrarian bet since it would be a bet on the reversion of confidence in Turkish equity markets. Currencies fall and broad risk asset indexes (such as XU100, as in the case of Turkish equities) generally depreciate on the back of a lack of confidence. However, a falling lira is rather constructive for domestic producers, since it makes their exports internationally competitive. The chart below maps the Turkey Economic Confidence Index (the blue line; left y-axis) against Turkey Consumer Confidence (black, dotted line; right y-axis).

Notably, the Economic Confidence Index (the broader index) has actually achieved a deeper level this year as compared to the 2008 Global Financial Crisis. Still, the sharp rebound suggests that a reversal in fortune could be achieved going forward. It would be concerning if confidence had not rebounded; early signs are therefore constructive. Meanwhile, the XU100 index (which we will use in place of TUR, since TUR was not available pre-2008) fell by about 65% peak-to-trough (see chart below), as compared to just over 34% this year.

However, we are leaving a crucial element out here, which is the exchange rate. In the updated chart below, we express XU100 in USD terms instead.

In USD terms, this year’s fall has not been as aggressive as 2008/09. If consumer confidence bottoms out and as business confidence rebounds, it is possible that foreign capital will start to return to the country. We also know that the lira is a negative-yielding currency; the current inflation rate of 11.89% (year-over-year) compares to the one-week repo rate of 10.25%.

(Source: Trading Economics. Turkish inflation has been coasting at a level over the prevailing short-term interest rate, making the lira especially unattractive.)

The inflation-adjusted yield as implied by the central bank rate is, therefore, the net of 10.25% minus 11.89%, being -164 basis points. As an example, with the European Central Bank’s deposit facility rate of -50 basis points and deflation (year-over-year) in October 2020 of -30 basis points, the EUR yield is only negative by 20 basis points. The adverse variance of 144 basis points makes EUR/TRY fundamentally attractive (on the upside), and since the euro is far safer than the lira, further lira weakness cannot be ruled out.

Still, I would suggest that lira weakness is likely to start to peter out. If/when tourism returns, Turkey should look very attractive to foreigners, on the basis that annual inflation of less than 12% compares to lira depreciation that has resulted in G10 currencies gaining between 40 and 60% YTD against the Turkish currency. Foreigners’ purchasing power, and Turkish trade partners, all have an incentive to exploit this. However, to see the reversal of fortune, we would first want to see two things: (1) the Turkish current account needs to revert into positive territory; and (2) long-dated Turkish government bonds will need to firm up.

We would also want to see long-dated Turkish bonds firming up. Bond prices move inversely to yields. Further weakness in Turkish bonds would therefore indicate continued pessimism. While longer-dated rates are typically viewed as a sign of longer-term confidence, in this case, it would indicate that markets are of the opinion that even higher rates will be needed in the long term to inhibit further capital outflows. We want to see some price stability, and even a little strength, on the 10-year bond in my opinion.

READ ALSO  What About Scottish Independence?

European investors have historically measured the credit risk of Italy by studying the spread between Italian and German bond yields. Germany is considered a European safe haven, at least in the bond market. We can similarly look to the spread between Turkish and German yields; a falling spread would indicate stronger confidence in Turkey. As shown in the chart below, confidence (by this metric) has collapsed this year. Yet if the spread can stay below the 15% mark (indicated by the horizontal line below), this would help to support a long-TUR thesis.

To invest in TUR would be to invest in a reversion of confidence to the upside. To be interested in entering this trade, we should want to see some key macroeconomic and market indicators show some early signs of marked improvements. As suggested, the current account balance and the Turkish bond market are two important places to look. Continued lira weakness is probable however we may begin to see these FX outflows become less prominent.

No doubt, being long TUR would be a contrarian bet at this stage, and I would not necessarily recommend this just yet. However, the contrarian in me is saying that a long thesis is building for Turkey. Fund flow data was significantly bearish in Q1 2020 (as shown below), however, this applied to much of the global equity space. More recently, we have seen some significant inflows relative to the fund’s AUM (including a relatively large commitment on October 19; daily net inflows totaled $15.16 million, with current AUM pegged at $201 million). 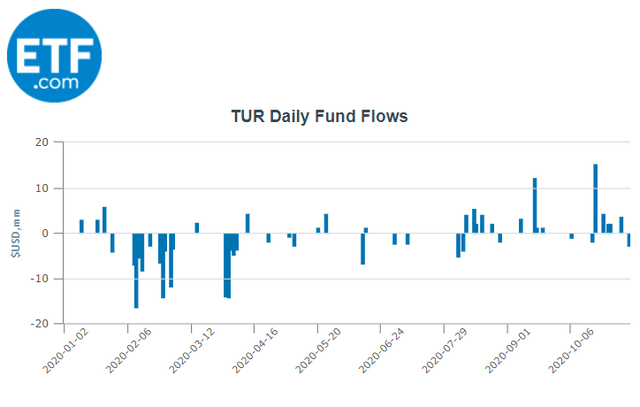 The very, very early signs of a possible reversal of fortune are appearing.

If you liked my article…

Please consider clicking the “Follow” button at the top of the article to receive notifications.