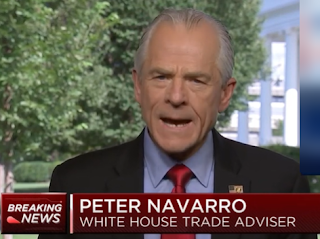 The Chinese-hating, anti-trade, President Trump adviser, Peter Navarro, is at it again.

On Friday on NBC’s “Closing Bell” during a 26 minute and 52-second appearance, Navarro said China plans to devalue its currency — and if it does, the U.S. will respond forcefully.

“Clearly, they are manipulating their currency from a trade point of view,” Navarro said.“They’re going to, and we’re going to take strong action against them.”

“China has devalued its currency by over 10% with the express purpose of neutralizing tariffs, full stop,” Navarro said.

Navarro also attacked China for dumping and for subsidizing its trade manufacturers. What Navarro didn’t mention is that while Chinese dumping and trade subsidies hurt Chinese citizens, they are a plus for US consumers since it means that US consumers get to buy goods cheaper.

Navarro’s anti-trade position, which is close to that of Trump’s position, is a remarkably antiquated view that is held by very few economists. Even Paul Krugman rejects it:

If you want to understand the developing trade war with China, the first thing you need to realize is that nothing Donald Trump is doing makes sense. His views on trade are incoherent. His demands are incomprehensible. And he vastly overrates his ability to inflict damage on China while underrating the damage China can do in return.

As the great economist Ludwig von Mises put it:

[E]conomics shows us that even if another country places artifi ial barriers on trade, it is still better for us as consumers to allow free trade; any sort of retaliatory tariff s, quotas, or enforced cartels only cut off  our noses to spite our faces.

Navarro also said during the interview that the farmers who are suffering because of China’s retalitory tariffs would be made whole. In other words, through taxing or borrowing, funds will be taken from others to give to farmers so that Trump won’t lose their vote in 2020despite his damaging trade policy.