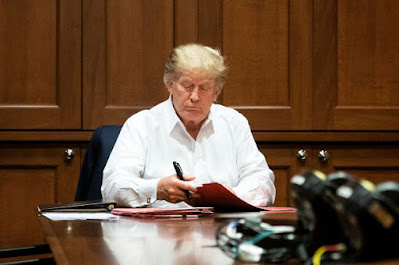 At an appearance in Charlotte, North Carolina, last month, President Trump unveiled his replacement for Obamacare that “puts patients first, families first, and — perhaps most importantly for all of us — America first.”

The Patient Protection and Affordable Care Act, otherwise known as the PPACA, ACA, or Obamacare, was signed into law on March 23, 2010. It consisted of numerous “reforms” to health care and health insurance and a bevy of new taxes and tax increases to pay for them.

Obamacare expanded Medicare; created state health-insurance exchanges; began federal subsidies for the purchase of health insurance; and required that insurance companies provide policies with minimum standards, cover all applicants without regard to their pre-existing medical conditions, eliminate annual and lifetime caps on benefits, eliminate co-payments and deductibles for selected health-insurance benefits, and allow children to remain on their parents’ insurance plan until their 26th birthday.

Said Trump in his speech about Obamacare, “It was terrible and very, very expensive. Hurt a lot of people. Premiums were too high. Deductibles were a disaster. Patients had no choice. You couldn’t keep your doctor. But, by far, the worst part of Obamacare was this thing called the ‘individual mandate.’”

But in spite of many attempts, Republicans could not bring themselves to just simply repeal Obamacare lock, stock, and barrel. To their credit, Republicans did eliminate the individual mandate in the Tax Cuts and Jobs Act of 2017 and a federal district court and a federal appeals court then ruled that the individual mandate was unconstitutional. Democrats and Republicans united in 2019 to repeal the medical-device tax and the “Cadillac tax” on high-cost, employer-sponsored health-care plans. The rest of Obamacare still stands.

But according to Trump,

Obamacare is no longer Obamacare. As we worked on it and managed it very well. We stabilized it and got premiums down very substantially.

But it’s still unacceptable to me because it’s too expensive and doesn’t really do the job as well as we could have. So what we have now is a much better plan. It is no longer Obamacare because we’ve gotten rid of the worst part of it — the individual mandate — and made it much less expensive. A lot of that was through good management. We manage it properly. We have tremendous people working on it. Simultaneously with all of this, we are joining in a lawsuit to end this ill-conceived plan. I’m in court to terminate this really, really terrible situation.

The president’s new and improved version of Obamacare is called “An America-First Healthcare Plan”:

We will ensure the highest standard of care anywhere in the world, cutting-edge treatments, state-of-the-art medicine, groundbreaking cures, and true health security for you and your loved ones. And we will do it rapidly, and it’s in very good order, and some of it has already been implemented.

The “three pillars” of Trump’s plan are choice, lower costs, and better care. Here are the highlights:

Under our plan, you’ll have the freedom to shop for the option that is right for you and your family. These options include new, affordable choices that cost up to 60 percent less than Obamacare.

Through a massive expansion of health reimbursement arrangements, millions of Americans will be able to shop for a plan of their choice on the individual market and then have their employer cover the full cost.

We will end surprise medical billing.

My plan also includes the vital reform of price transparency.

I’m taking on the lobbyists and the special interests to lower the price of prescription drugs.

We will finally allow the safe and legal importation of prescription drugs from Canada.

Under my plan, 33 million Medicare beneficiaries will soon receive a card in the mail containing $200 that they can use to help pay for prescription drugs.

Under my plan, hundreds of thousands of Medicare patients will see their insulin costs capped at just $35 a month.

We’ll ensure that all seniors pay the same price for the same service, whether at a hospital, a surgery center, or a doctor’s office.

The historic action I’m taking today includes the first-ever executive order to affirm it is the official policy of the United States government to protect patients with preexisting conditions.

We’ll require doctors to make your records available electronically, and you’ll own them, and you’ll control them, and they will be portable, and you’ll be able to work seamlessly with all of your medical providers.

Trump then issued an executive order (no. 13951) about his health-care plan that mostly recounts, in a very long section 1, “Purpose,” his administration’s health-care accomplishments. Section 1 concludes,

Taken together, these extraordinary reforms constitute an ongoing effort to improve American healthcare by putting patients first and delivering continuous innovation. And this effort will continue to succeed because of my Administration’s commitment to delivering great healthcare with more choices, better care, and lower costs for all Americans.

Section 2, “Policy,” merely says, “It has been and will continue to be the policy of the United States to give Americans seeking healthcare more choice, lower costs, and better care and to ensure that Americans with pre-existing conditions can obtain the insurance of their choice at affordable rates.”

Section 3, “Giving Americans More Choice in Healthcare,” merely says, “The Secretary of the Treasury, the Secretary of Labor, and the Secretary of Health and Human Services shall maintain and build upon existing actions to expand access to and options for affordable healthcare.”

Section 5, “Providing Better Care to Americans,” concerns improving “quality in the delivery of care for veterans,” and government promotion of “medical innovations to find novel and improved treatments for COVID-19, Alzheimer’s disease, sickle cell disease, pediatric cancer, and other conditions threatening the well-being of Americans.”

Would it be good if the United States and its citizens had the highest standard of care anywhere in the world, cutting-edge treatments, state-of-the-art medicine, ground-breaking cures, true health security, affordable insurance options, reduced prices on prescription drugs, no surprise medical bills, price transparency, more choice, lower health-care costs, increased access to telehealth? Would it be good if waste, fraud, and abuse in the health-care system were reduced?

Of course it would.