Last Friday, the news out of the White House was that Trump administration was about to announce a major biofuel boost to support United States farmers. The move was to be a key development after weeks of intense debate over how to respond to harsh criticism coming from biofuels’ backers and months of bureaucratic back and forth about highly contentious and allegedly corrupt biofuel waiver trading.

The outrage expressed by the powerful corn lobby over the last few weeks was brought on when Trump abruptly the months-long review of the problematic biofuel waiver program in August with a single phone call. The President instructed U.S. Environmental Protection Agency head Andrew Wheeler to grant 31 of 40 applications for small refinery exemptions to biofuel blending quotas. In doing so, Trump openly sided with the Big Oil over Big Corn, triggering massive backlash from farmers and their advocates. The political divide between oil and corn is not a new one. As reported by Reuters, “the White House has sought to make changes to the nation’s biofuels laws since the beginning of Trump’s administration in early 2017, but found themselves caught between the powerful oil and corn lobbies, both of whom have allies in Washington in Trump’s Republican Party.”

In the early hours of Friday morning, it was reported that the Environmental Protection Agency was finally going to respond to farmers’ criticisms of Trump’s August decision and take action to better support biofuels with a “giant package” that Trump has been teasing since late August. Bloomberg, in one of many articles about the impending decision, reported that the EPA was about to announce “several changes to propel those renewable fuels, including a commitment to bolster annual biofuel-blending quotas to compensate for waivers exempting some small refineries from the mandates. The shift, which still must be formally proposed and codified, would effectively force bigger, non-exempted refineries to take up the slack.”

READ ALSO  US debates school reopening, WHO warns ‘no return to normal’

Immediately, biofuel backers responded favorably to the as-yet unveiled plan. Before the Environmental Protection Agency’s public unveiling of Trump’s purportedly big biofuel overhaul, key figures in the debate including Iowa senator and Big Corn advocate Chuck Grassley praised the plan (Iowa is the biggest ethanol producing state in the country). Grassley said in an emailed statement that “This announcement is great news for Iowa, the Midwest and the entire country. Small refineries can still apply for waivers while biofuels are able to blend the legally-required amount.”

In the week after the plan was released to the public, however, it has become abundantly clear that Trump’s big biofuels boost is not so big after all. The plan itself is extremely vague, failing to impose any specified amount of increase to current ethanol blending quotas, and so far has done nothing but sow instability in the market. Related: Saudi Revenge? Iran Reports Oil Tanker Explosion

Reporting by Seeking Alpha expands on the myriad ways in which the move has so far created market volatility: “This announcement, combined with the news that Mr. Trump was personally mediating between the U.S. biofuels and refining sectors in an attempt to develop a proposal that both sides found acceptable, has caused a substantial amount of volatility in the share prices of major biofuel producers […] over the subsequent five weeks (see figure). Expectations had been diminished after it become clear over the last week that the mediation had failed to overcome opposition by the U.S. refining sector to any mandated increase to U.S. biofuels demand. Even then, though, this recent volatility made the relative lack of a reaction by those same companies’ share prices to last Friday’s unveiling of the plan all the more notable.” 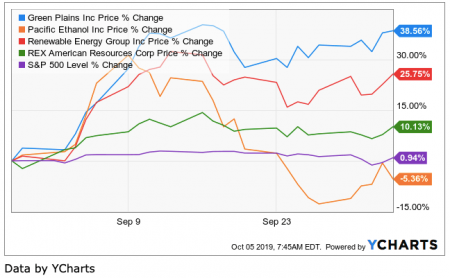 Trump’s plan will still have to undergo a slow-moving public review process before any change is actually implemented. The plan’s final release is slated for November 30. In the meantime, it remains to be seen whether the corn lobby will accept Trump’s initiative as a good faith effort to boost U.S. farmers’ livelihoods or if this is the beginning of a much longer debate.

By Haley Zaremba for Oilprice.com