Donald Trump has raised the spectre of “bedlam” after the November 3 vote, magnifying fears that the US president will challenge the result as the number of early voters passes record levels.

As of Saturday evening, more than 90m ballots had been cast in the election, according to the US Elections Project, a database compiled by Michael McDonald, a professor at the University of Florida. That is 65 per cent of the total votes cast in 2016, suggesting massive turnout.

In a quartet of Pennsylvania rallies just three days before the last day of voting, Mr Trump offered stark warnings of delayed results, raised the prospect of electoral fraud in the key swing state, and said that Democratic rival Joe Biden would trap the country in an “endless nightmare of lockdowns” if he won on Tuesday.

On Sunday, Mr Trump will take his message on the road again with a five-stop final campaign blitzkrieg that will take him from Michigan to Iowa, North Carolina, Georgia and Florida. Meanwhile, Mr Biden, who spent Saturday campaigning with former president Barack Obama in Michigan, travels to Pennsylvania.

On Saturday, Mr Trump warned “very bad things” would happen in the wake of Tuesday’s vote and criticised a Friday Supreme Court decision which will allow Pennsylvania to accept absentee ballots for an additional three days after Tuesday.

“We’re going to be waiting. November 3 is going to come and go, and we’re not going to know, and you’re going to have bedlam in our country,” Mr Trump said in Newtown, Bucks County.

Later, in Reading, Pennsylvania, Mr Trump warned that “the only way we’re going to lose this state [is if] somebody’s going to play games”.

Mr Trump trails Mr Biden in Pennsylvania by more than 5 points, according to a Financial Times analysis of polling data from RealClearPolitics. Nationally, Mr Biden leads 52 per cent to 43 per cent.

Mr Trump’s message contrasted starkly with Mr Biden’s, who suggested Tuesday’s vote would herald an end to the chaos that had governed the past four years, and the past seven months in particular.

“In three days, we can put an end to a presidency that has fanned the flames of hate all across this nation,” Mr Biden told a drive-through rally in Detroit. “It’s time for Donald Trump to pack his bags and go home. We’re done with the chaos. The tweets. The anger. The hate. The failure. The irresponsibility.”

In the final days of the campaign, Mr Biden has focused his attacks on what he claims is Mr Trump’s gross mismanagement of the pandemic — an area where polls show a majority of Americans believe the president has fallen short. 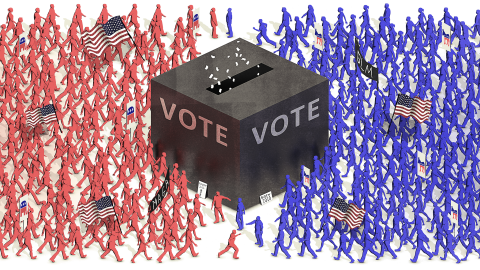 The number of new infections rose by 90,000 on Saturday. While this was down from a record increase of 97,000 on Friday, the total number of cases since the start of the pandemic has surged to more than 9m, according to the Covid Tracking Project.

Midwestern states comprise more than 40 per cent of the latest cases. Eleven of those 12 states had seven-day averages that were a record high on Saturday, while eight of them reported their highest level of coronavirus hospitalisations.

“Imagine where we would be if we had a president who wore a mask instead of mocked it?” Mr Biden asked the crowd in Detroit. “I can tell you this: We wouldn’t have 9m confirmed cases of Covid in this nation. We wouldn’t have over 230,000 deaths.”

Mr Biden suggested that a victory for his campaign would usher in a new phase of the fight against the virus.

Mr Biden’s campaign on Saturday circulated the results of a Stanford University study that estimated that just 18 of Mr Trump’s many rallies between June and September had resulted in 30,000 extra Covid-19 cases, and 700 deaths.

Mr Trump said on Saturday that all Mr Biden talked about was “Covid, Covid, Covid.”