TRUMP TRIGGERED: Is He About to Dump Jay Powell As Chairman of the Federal Reserve? 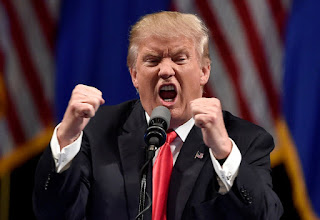 President Trump has been triggered by Federal Reserve Board chairman Jay Powell.

A day after Powell asserted his independence from the White House during a speech in New York City at the Council on Foreign Relations,  Trump went on another attack against the Fed chairman.

This is the Powell comment in front of the elitist group that likely triggered Trump:

This caused Trump to comment during an interview Wednesday morning with Maria Bartiromo on her Fox Business show. About Powell he said:

We should have [the head of the European Central Bank Mario] Draghi, instead of our Fed person. Draghi, last week, he said lower interest rates and we’re going to stimulate the economy. They’re going to put money into the economy.

Now what is most interesting about this latest outburst is that, according to The Wall Street Journal, Federal Reserve Bank of St. Louis President James Bullard said Tuesday he has been approached by White House officials “in recent months” about the possibility of serving on the Fed’s board of governors.

Bullard characterized the discussions as “exploratory in nature.” He said he told the Trump administration that he is happy in his current position.

But here is the thing,  Bullard currently sits on the Fed’s rate-setting committee, the Federal Open Market Committee and he is a dove. So moving him over to the Fed Board wouldn’t help much………unless Trump is considering replacing Powell at the top of the Fed board.  Whoever would replace Bullard at the St. Louis Fed wouldn’t have that much more input on rates and it is unclear if it would be a hawk or a dove on lower interest rates anyway.

But here is the deeper thinking. Most lawyers familiar with the relevant law say that Trump can’t fire Powell but he can remove him as Fed chairman. And when it comes to setting monetary and interest rate policy, the chairman holds most of the power.

Thus, putting Bullard, an interest rate dove, on the board so that he can replace Powell makes a lot of sense from Trump’s perspective.

That said, money and interest rate manipulation is always a bad idea. It creates the business cycle and always down the road leads to price inflation.

Robert Wenzel is Editor & Publisher of EconomicPolicyJournal.comand Target Liberty. He also writes EPJ Daily Alert and is author of The Fed Flunks: My Speech at the New York Federal Reserve Bankand most recently Foundations of Private Property Society Theory: Anarchism for the Civilized Person Follow him on twitter:@wenzeleconomics and on LinkedIn. His youtube series is here: Robert Wenzel Talks Economics. More about Wenzel here.

Previous PostJapan watchdog to recommend $24 million fine for Nissan over Ghosn pay: sourceNext PostByron York: What now, for those who denied a ‘crisis’ at the border?