As far as gifts go, it was both well-received and unexpected given the ‘Deep State’ designs on Syria for years.

To recap: Last week, Trump ordered the withdrawal of U.S. troops from Syria, and then had them stand down and step aside while the Turkish military poured across the border into Northern Syria, taking down any Kurds that stood in their way.

After five days of bloodshed, Turkey agreed to a temporary ceasefire at the behest of the Russians. Turkish leader Recep Tayyip Erdogan then flew to Sochi to meet with Russian President Vladimir Putin, where the two agreed to a deal that benefits everyone except the U.S.

Under that deal, Turkey will stick to its newly acquired buffer zone in Northern Syria, the Kurds will be allowed to withdraw with their lives, and Assad won’t attack the Turks, who have been fighting the regime in collaboration with Syrian rebels.

And all that oil that’s in the north–Syria’s fossil fuel heartland–will go to Assad one way or another, with Russia the beneficiary with the exclusive rights to exploit Syrian oil.

Securing Oil for Others

Last week, Trump tweeted that he had “taken control of oil in the Middle East”.

That tweet went viral–even though no one knew what it meant.

As it turns out, he was talking about Syria when he added “the oil that everybody was worried about”.

And also, as it turns out, he did secure that oil–but for the Assad regime and its allies, Russia and Iran.

Giving up that oil, the tweet suggests, is a decision that should have been years ago under the Obama Administration.

In another parting gift, Trump moved today to lift all sanctions against Turkey, declaring the ceasefire in Syria officially over–from a U.S. standpoint.

Yesterday, Trump said a limited number of troops might remain behind in Syria to guard oil and gas fields in Deir Ezzor, but that is now looking increasingly unlikely.

“Right now, the president has authorized that some would stay in the southern part of Syria,” Defense Secretary Mark Esper said. “And we’re looking [at] maybe keeping some additional forces to ensure that we deny ISIS and others access to these key oil fields.

“But that needs to be worked out in time. The president hasn’t approved that yet,” he said. “I need to take him options sometime here soon.”

So much for keeping Syrian oil out of the hands of multiple enemies, from the Assad regime and Iran, to Russia and potentially even ISIS.

How Much Oil Did Assad Just Inadvertently Secure?

What’s in the ground is 2.5 billion barrels, according to the EIA. And that’s only known reserves as of January 2011.

For Assad, this was a major coup. Aside from the Idlib province, which is overrun by Syrian rebels, he had managed to regain control of the entire country outside of the Northeastern part, north of the Euphrates, the stronghold of the Syrian Kurds and their now-former American allies.  Related: How Much Oil Is Up For Grabs In Syria?

And north of the Euphrates is also where the bulk of the country’s oil reserves are.

Assad is desperate for oil. But he won’t be much longer. 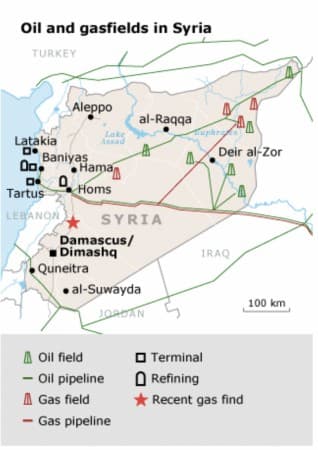 And it’s home to the Al-Omar fields, which have the largest production capacity in the country.

This is an oil victory for every single one of America’s enemies in the region.

For Russia, this is a geopolitical goldmine that will land it a long-sought-after Iran-Iraq-Syria pipeline courtesy of Gazprom. It will be a direct line to Europe, where the noose will once again be tightened, while the EU pretends otherwise.

For Syria, it means the potential to become another Middle East oil and gas hub and more power than Assad could have ever imagined before all of this started.

For Iran, it’s just another in a series of victories that have come in rapid succession over the past two months–from its brazen attack on Saudi oil facilities that went entirely unanswered, to its victory in Yemen with a fallout in relations between eternal allies Saudi Arabia and the UAE.

Oil has long been a kingmaker, and it still is. American foreign policy hasn’t just been caught napping; it’s been turned into a suicide by oil.

By Charles Kennedy for Oilprice.com