President Trump on Monday signed an executive order to impose “hard-hitting” sanctions against Iran days after Tehran shot down a U.S. spy drone over the Strait of Hormuz amid rising tensions between the two countries.

Trump said the order will target Iran’s supreme leader, Ayatollah Ali Khamenei, and associates with additional financial sanctions. He added that he would “love to negotiate a deal” with Iran, believes the country has a “great future’ and the “people of Iran are great people.” 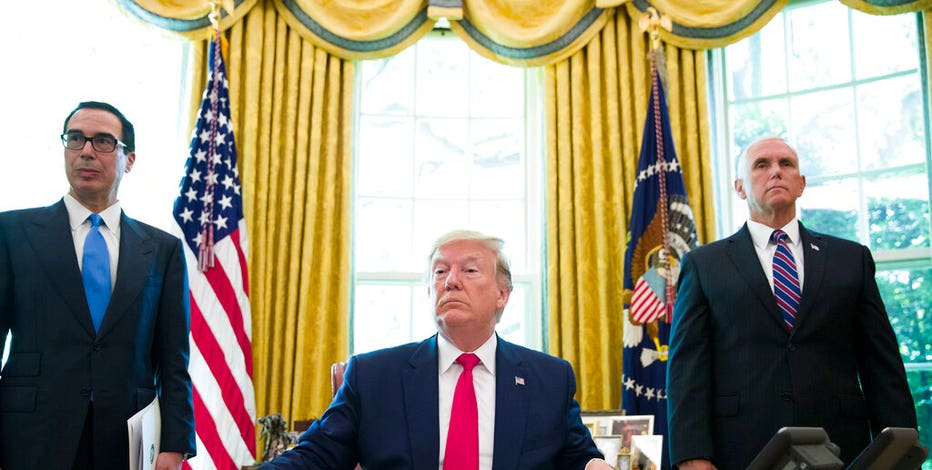 President Donald Trump listens to a reporter’s question after signing an executive order to increase sanctions on Iran, in the Oval Office of the White House, Monday, June 24, 2019, in Washington. Trump is accompanied by Treasury Secretary Steve Mnuc

“We will continue to increase pressure on Tehran,” Trump said during remarks inside the Oval Office. “Never can Iran have a nuclear weapon.”

“We do not seek conflict with Iran or any other country. I can only tell you we cannot ever let Iran have a nuclear weapon,” he added.

Trump said “a lot of restraint has been shown by the U.S.” when it comes to Iran in the face of recent events.

“But that doesn’t mean we’re going to show it in the future,” the president added.

The order comes amid rising tensions between the U.S. and Iran, including last Thursday when an Iranian surface-to-air missile brought down a $100 million U.S. surveillance drone, claiming that the unmanned aircraft was in the country’s airspace. U.S. officials have denied Tehran’s allegations. Trump said Friday he called off a military strike on Iran with just minutes to spare, although Fox News confirmed the U.S. carried out a cyberattack on the Islamic Republic.

READ ALSO  ‘It was carnage’: Nigeria reels from bullets and brutality of protest crackdown

“We were cocked & loaded to retaliate last night on 3 different sights when I asked, how many will die,” Trump tweeted. “150 people, sir, was the answer from a General. 10 minutes before the strike I stopped it, not proportionate to shooting down an unmanned drone.”

Trump also announced on Twitter over the weekend that he would be imposing sanctions against Iran. On Monday, the president said the sanctions were “bound to happen” and that the drone incident was a factor, but not the sole reason he was signing the executive order.

FOX Business’ Matt Kazin and The Associated Press contributed to this report.