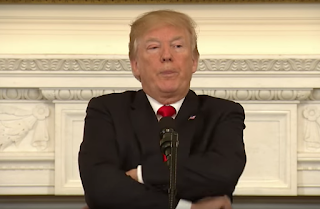 In a tweet early on Friday, President Trump said that “Our great American companies are hereby ordered to immediately start looking for an alternative to China…”

For all of the Fake News Reporters that don’t have a clue as to what the law is relative to Presidential powers, China, etc., try looking at the Emergency Economic Powers Act of 1977. Case closed!

It is not completely clear by this tweet whether Trump plans to use the Emergency Economic Powers Act of 1977 with regard to business with China or whether he is simply indicating he has the ability to do so.

Trump could treat China more like Iran and order sanctions, which would involve declaring a national emergency under a 1977 law called the International Emergency Economic Powers Act, or IEEPA.

Once an emergency is declared, the law gives Trump broad authority to block the activities of individual companies or even entire economic sectors, former federal officials and legal experts said.

If nothing else we see the taunting, bully Trump in action once again which makes it difficult for global firms to make long-term plans because they don’t know what may or may not be legal in the near future. Trump is the economic instability man.