Donald Trump has claimed mass postal voting could make it impossible to know the results of November’s presidential election “for months or for years” as he stepped up his campaign against universal mail-in voting.

The president made his remarks the day after the US Postal Service warned nearly every state in the country it might not be able to process postal votes in time for November 3 presidential polls.

Mr Trump, who is facing defeat at the election according to the latest polls, warned votes could be lost, discarded, or subject to fraud — found “in piles” or “be gone” — adding there would be no way to know when to cut off the vote count.

“You are going to have a catastrophic situation with universal mail-in votes,” he told reporters at a press conference on Saturday, saying the US could not send out millions of votes. “It is going to make our country a laughing stock,” he said. 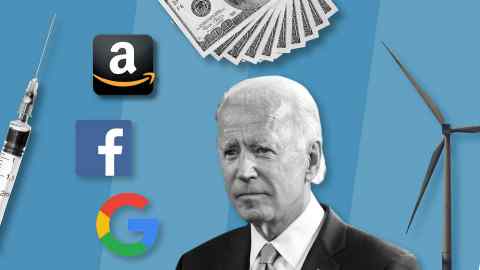 Louis DeJoy, America’s new postmaster general, has been criticised for dismantling mail sorting machines, cutting overtime and removing post boxes since the presidential appointee — a Trump donor — started the role in June. The post office says structural changes and budget cuts are needed to put it on an operational footing as dwindling revenues tumble further during the coronavirus pandemic.

But critics argue Mr Trump is seeking to depress voter turnout in a bid to boost his share of the vote and to undermine the credibility of the election result should he lose.

Top Democrats accused Mr DeJoy in a letter on Friday of using funding shortfalls to “justify sweeping operational changes that experts warn could degrade delivery standards, slow the mail . . . and potentially impair the rights of eligible Americans to cast their votes through the mail in the upcoming November elections”.

A crowd of protesters demonstrated outside Mr DeJoy’s home in Washington earlier on Saturday, accusing him of gutting the service to hinder postal voting. Some posted fake mail-in ballots through the grate on his front door.

Mr Trump defended Mr DeJoy, arguing he was trying to “streamline the process” and blaming Democrats for failing to agree the terms of a stimulus package which he claimed could fund the post office.

“He needs money to operate if you’re going to hit him with millions of ballots,” he said, adding Mr DeJoy wanted “to make the post office great again”.

“If they [Democrats] can’t get the money they need for universal mail-in voting, I don’t see how they can have it,” said Mr Trump, adding the main problem with mail-in voting was that “you’re never gonna know when the election’s over”.

Democrats in Congress have pushed to include $25bn in emergency funding for the postal service in stimulus legislation, warning that coronavirus will make postal voting more important at this election than ever.

“Everyone depends on the USPS,” Barack Obama, the former Democratic president, tweeted on Friday. “Seniors for their Social Security, veterans for their prescriptions, small businesses trying to keep their doors open. They can’t be collateral damage for an administration more concerned with suppressing the vote than suppressing a virus.”

Mr Trump later jokingly referred to his own defence secretary Mark Esper as “Yesper” — a disparaging moniker that has circulated in recent months to imply Mr Esper’s serial disinclination to disagree with Mr Trump. The Pentagon did not immediately respond to a request for comment.