Trump says he will not participate in virtual debate

Donald Trump has said he will not take part in the second US presidential debate after the independent commission that sets debate rules announced it would be held remotely because of coronavirus concerns.

“I’m not gonna waste my time on a virtual debate,” the US president said in an interview with Fox Business Network on Thursday morning. “That’s not what debating is all about.”

The format of next week’s duel between Mr Trump and Joe Biden, the Democratic candidate, has been under scrutiny since the president’s diagnosis with coronavirus last week.

In its statement on Thursday morning, the commission on presidential debates said the second joint appearance would be held remotely “in order to protect the health and safety of all involved”.

Because the White House has not released a timeline of Mr Trump’s Covid-19 tests, some Democrats believe the president was already infected when he took the stage with Mr Biden at the first debate in Cleveland.

Despite medical warnings that those with coronavirus can be contagious for more than a week after contracting it, Mr Trump had said he still wanted to attend next week’s event in person in Miami.

Mr Biden has said that if Mr Trump was still infected with coronavirus, the debate should not be in-person. 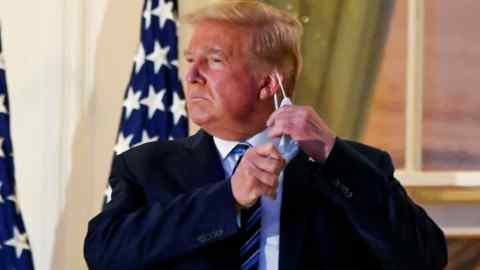 Under the new rules announced on Thursday, the debate moderator would have been in Miami and the format would have remained a town-hall meeting, but both candidates “would participate from separate remote locations”.

Bill Stepien, Mr Trump’s campaign manager who has also been stricken with coronavirus, said in a statement that the president would hold a rally instead of participating in the debate and accused the commission of attempting to “bail out Joe Biden”.

“For the swamp creatures at the presidential debate commission to now rush to Joe Biden’s defence by unilaterally cancelling an in-person debate is pathetic,” Mr Stepien said.

Mr Trump has seen his polling numbers fall since the first debate, where he repeatedly interrupted Mr Biden and attacked the former vice-president on sometimes personal terms.

The average of national polls maintained by RealClear Politics now has Mr Biden ahead of Mr Trump by 9.7 percentage points, up from 6.1 percentage points on the day of the Cleveland debate.

Traditionally, candidates who are behind in the polls are eager to participate in debates because it provides them a nationally televised opportunity to change the direction of the race. But Mr Trump said he believed the format was unworkable.

“You sit behind a computer and do a debate, it’s ridiculous,” he said. “And then they cut you off whenever they want.”

Video: US 2020 election: Trump vs Biden and the African-American vote