Donald Trump’s presidential campaign has retreated from the airwaves in recent weeks, spending only a fraction of the vast sums his Democratic challenger Joe Biden is pouring into expensive television advertisements as election day looms.

From July 24 to September 11 Mr Trump’s campaign spent just $44m buying adverts across television and radio, the vast majority of which went to TV, according to data from Advertising Analytics. Over the same period, Mr Biden’s campaign spent $130m flooding the airwaves.

In July, the Trump campaign was pushing roughly $10m in television and radio adverts a week but towards the end of that month its spending halved to under $5m a week. By the final week of August Mr Trump’s ad spending had dwindled to just $2.2m, while Mr Biden was shelling out $19m a week to beam his message into American homes.

Mr Trump’s pullback from television adverts comes amid signs that his campaign is running low on cash with just seven weeks to go before election day. The Trump campaign and Republican National Committee raised $210m in August, well behind the record-breaking $365m that Mr Biden and the Democrats raised in the same month.

In some key swing states, such as Iowa and Nevada, the Trump campaign this week stopped television advertising entirely, while it cut spending significantly in Ohio, Pennsylvania and Wisconsin, according to Advertising Analytics.

For the week of September 13 to 19, Mr Trump spent only $60,000 on advertising in Ohio, where he trails Mr Biden in the polls by about two points, according to Real Clear Politics.

READ ALSO  How Long Can The Fed Keep This Time Bomb From Exploding? 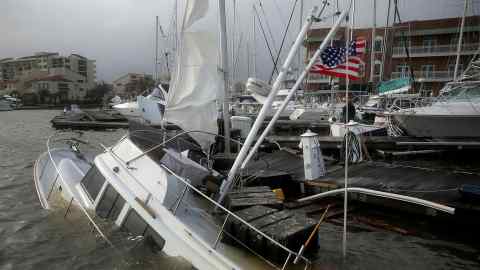 In an emailed statement, Samantha Zager, deputy national press secretary for the Trump campaign, defended the president’s ad-spending strategy, suggesting that Mr Biden was more reliant on television advertising than Mr Trump because he was not doing as many in-person get-out-the-vote events.

She said Mr Biden had “decided to run a campaign based entirely on buying television ads. President Trump and his campaign have spent years connecting directly with voters, both in the field and with ads.”

Ms Zager said the campaign was targeting its advertising spending on states where there is expected to be more early voting, adding: “The president will have the resources he needs to ensure his message resonates, and we will have two or three times the funds we had in the closing days of the 2016 race.”

Even as the Trump campaign has pulled back in Nevada and Iowa, it has boosted spending in Florida, Arizona and North Carolina.

Both Mr Trump and Mr Biden are making their biggest buys in Florida, the battleground state where polling shows the candidates are neck and neck. For the week of September 13 to 19, the Trump campaign poured $4.4m into advertising in Florida, while Mr Biden’s team spent $8m.

However, there is one area where Mr Trump has outspent Mr Biden: online. Mr Trump’s team has ramped up his buying on digital in recent weeks, spending $72m on buying adverts on Facebook and Google from July 17 to September 4 — well above the $47m the Biden campaign spent in the same period.

The 2020 race is expected to drive $5.1bn in political advertising sales — up 32 per cent from 2016 and a new record, according to Magna, a research group owned by IPG.