Trump ratchets up attacks on media ahead of final debate

Donald Trump pre-released footage of his combative interview with 60 Minutes, the CBS News show, and attacked members of the press including the moderator of the final presidential debate scheduled for Thursday night.

“Look at the bias, hatred and rudeness on behalf of 60 Minutes and CBS. Tonight’s anchor, Kristen Welker, is far worse!” the president wrote in a tweet on Thursday morning that linked to a White House recording of the interview.

The US president’s accusation of media bias came as he and Joe Biden, his Democratic rival, prepare to face off in the second and last presidential debate in Nashville, Tennessee, at 9pm ET.

On Thursday night, join Swamp Notes columnists Ed Luce and Rana Foroohar, along with US Managing Editor Peter Spiegel, for a night of real-time commentary and shrewd analysis. On the homepage from 7pm ET.

In the subsequent weeks, Mr Trump, the White House, and the president’s campaign have amplified their attacks on members of the media including Savannah Guthrie, an NBC journalist who interviewed Mr Trump last week.

Ms Welker, also of NBC, has been attacked by the Trump campaign and its surrogates for political donations that her parents made to Democratic candidates.

Earlier in the week, Mr Trump did an interview with Lesley Stahl, a journalist with 60 Minutes, although he cut the interview short following a series of terse exchanges with Ms Stahl.

Mr Trump subsequently declared the White House would pre-release its own footage of the interview before CBS had the chance to air it on Sunday, and followed through on the threat on Thursday.

CBS has said that the White House had promised to record the interview for archival purposes only.

In the footage released by the White House, Mr Trump was grilled by Ms Stahl on his response to Covid-19, the economy, and his healthcare plan, which the White House has not yet released despite repeated promises to do so.

He again suggested that the US is only seeing a rise in Covid cases because of the rise in testing — “If we did half the testing, we’d have half the cases” — and defended the name-calling and attacks in his tweets, suggesting it was key to his political survival. 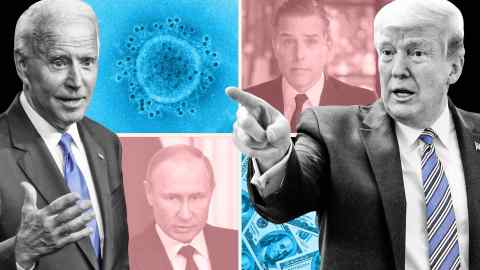 “People put out phoney witch hunts. When they spy on your campaign, you have to fight back, and if you don’t fight back you’re not sitting here very long, you go back home. You go back to mommy,” Mr Trump said.

He also acknowledged it was possible that a Biden administration might try to prosecute him were he to be voted out of office.

READ ALSO  Janet Yellen is the right woman for the times

Five minutes before the interview’s scheduled end, Mr Trump announced he would be cutting the conservation short. “I think we have enough of an interview here,” he said, before getting up to leave.