President Trump likes to use the stock market as a report card for his presidency, and he says anyone just looking at its performance while he’s been in office is doing it all wrong.

A better measure, according to the president, would be to look at the stock market’s performance since the day following his election win.

“My Stock Market gains must be judged from the day after the Election, November 9, 2016, where the Market went up big after the win, and because of the win,” Trump tweeted Sunday. “Had my opponent won, CRASH!”

Stocks soared in the wake of Trump’s 2016 election win, with the S&P 500 rallying 20 percent in 2017 as traders looked ahead to the tax cuts and deregulation promises he made on the campaign trail. The surge became known as the “Trump bump.”

While Trump has the best performing stock market in recent memory during the 702 days following an election win, he isn’t the only president to see success. Presidents Bill Clinton (+33.02 percent) and Barack Obama (+13.41 percent) also saw post-election gains over the same time period. George W. Bush (-29.96 percent) wasn’t as fortunate as his election win came right before the collapse of the dotcom bubble. 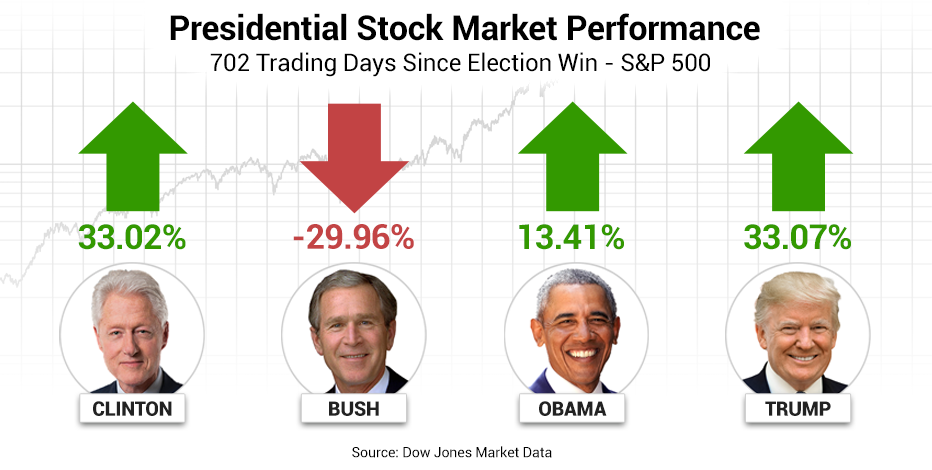 But Trump’s ability to goose the stock market may be coming to an end. Since March 1, 2018, the day Trump announced a 25 percent tariff on all imports of steel and aluminum, including metals from China, the S&P 500 has gained just 4.7 percent.

However, it’s a more recent development that has Morgan Stanley equity strategist Michael Wilson concerned. He points to the market’s inability to positively respond to a de-escalation in the trade situation as a reason for worry.

“This is the first time markets have not responded positively in a sustained matter to what amounted to a de-escalation of the trade situation,” Wilson wrote in an Aug. 19 note to clients. “We think it effectively means the Trade put has also expired.”

Such a sell-off would surely catch the attention of Trump, who in 2017 told the Associated Press, “You live by the sword, you die by the sword, to a certain extent.”