Trump’s visit comes a day after he attended the G20 summit in Japan where he met with Chinese President Xi Jinping to push forward trade talks amid the two countries’ stalemate. Trump said Sunday he and Kim agreed to resume denuclearization discussions in the coming weeks, four months after talks broke down during the second U.S.-North Korea summit in Vietnam.

“I was proud to step over the line,” Trump told Kim as they met in the building on the South Korean side of the truce village of Panmunjom. “It is a great day for the world.”

Kim hailed the moment, saying of Trump, “I believe this is an expression of his willingness to eliminate all the unfortunate past and open a new future.”

As he announced the resumptions of talks Sunday, Trump told reporters “we’re not looking for speed. We’re looking to get it right.” 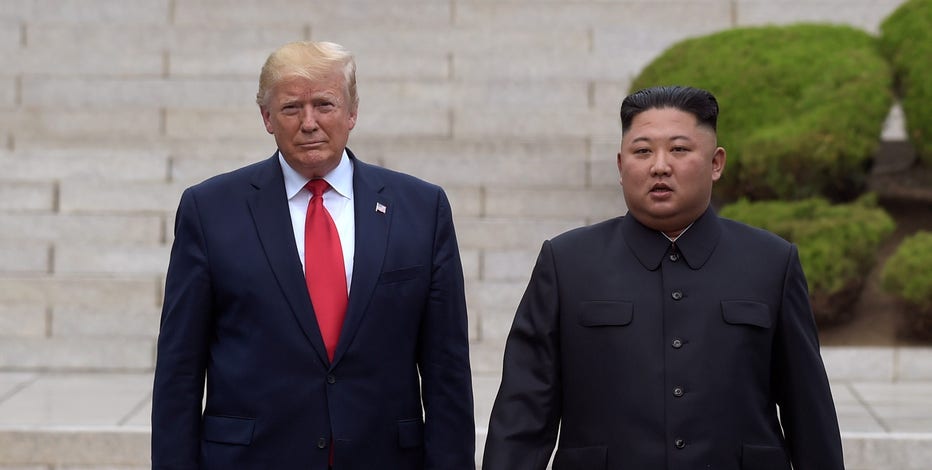 President Donald Trump, left, meets with North Korean leader Kim Jong Un at the North Korean side of the border at the village of Panmunjom in Demilitarized Zone. (AP)

He added that economic sanctions on the North would remain, but seemed to move off the administration’s previous rejection of scaling back sanctions in return for piecemeal North Korean concessions, saying, “At some point during the negotiation things can happen.”

Trump had announced he would be visiting the DMZ in a tweet on Friday, adding that his trip was “long planned.” He later tweeted, after meeting Kim, that he had a “wonderful meeting” with the North Korean leader.

“Leaving South Korea after a wonderful meeting with Chairman Kim Jong Un. Stood on the soil of North Korea, an important statement for all, and a great honor!” Trump wrote on Twitter.

The meeting comes a day after Trump and Xi met in Osaka, Japan, and agreed to resume trade talks since tensions escalated last month. Just more than a week ago, on June 20, Xi also traveled to North Korea’s capital, Pyongyang, to meet with the North Korean despot. 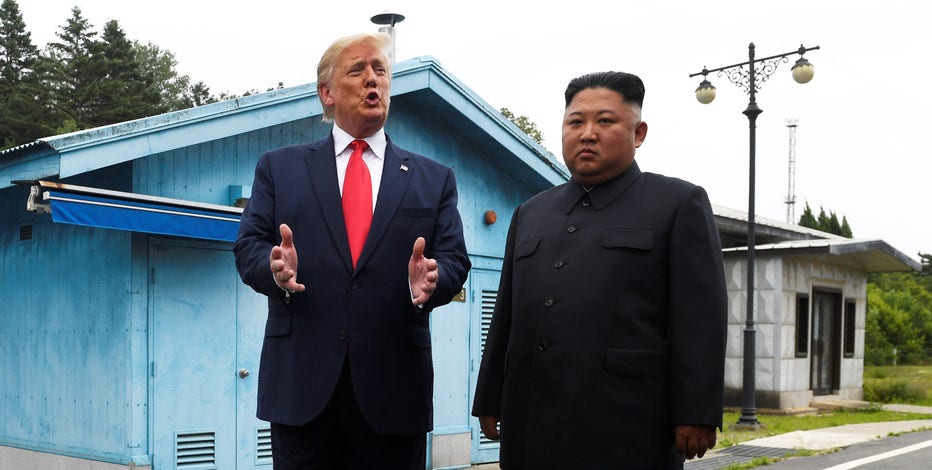 Trump tweeted that the meeting with Xi went “far better than expected” and that he agreed not to impose tariffs on another $300 billion worth of Chinese goods as he previously said would happen if his talks with Xi went poorly.

“I had a great meeting with President Xi of China yesterday, far better than expected. I agreed not to increase the already existing Tariffs that we charge China while we continue to negotiate,” Trump wrote in a series of tweets. “China has agreed that, during the negotiation, they will begin purchasing large amounts of agricultural product from our great Farmers. At the request of our High Tech companies, and President Xi, I agreed to allow Chinese company Huawei to buy product from them which will not impact our National Security.”

Trump added that trade negotiations have resumed and the U.S.’s relationship with China remains a “very good one.”

“The quality of the transaction is far more important to me than speed. I am in no hurry, but things look very good! There will be no reduction in the Tariffs currently being charged to China,” he concluded.

Previous PostChristians in Africa: “You have three days to go or you will be killed!”Next PostLeaving South Korea after a wonderful meeting with Chairman Kim Jong Un. Stood o…