Donald Trump drew a smaller television audience for his address to the Republican convention than Democrat Joe Biden did for his acceptance speech the week before, Nielsen data shows.

Roughly 23.8m people tuned in live to watch the president on Thursday night, compared with 24.6m for Mr Biden. Mr Trump also fell short of his television audience at the 2016 convention — 32m.

The Democrats attracted more viewers than the Republicans on every day of their four-day gatherings other than Tuesday, when Jill Biden was the Democratic headliner and Melania Trump was the featured Republican speaker. Only 19.2m people watched the second night of the Democratic convention live on television, compared with 19.4m for the Republicans.

Both parties drew strong ratings for their conventions, which are the type of event fare that attracts large audiences to traditional television, even as online streaming becomes more popular.

With nearly 24m and 25m viewers for the final nights of the Republican and Democratic conventions, respectively, both events topped telecasts such as this year’s Oscars and Grammy awards.

The Nielsen figures do not include viewing from online sources like YouTube. Traditional television viewership for both conventions skewed heavily towards older age groups. People aged 55 and older made up two-thirds of the viewers of the Republican convention’s final night. 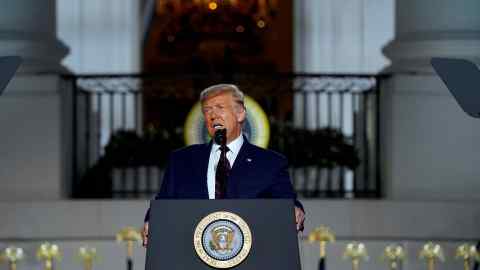 Fox News was the preferred network during Mr Trump’s convention speech, affirming its popularity with conservative Americans. The cable channel drew 9.2m viewers during the 10pm hour on Thursday night, according to the early Nielsen data.

Fox News has been riding high in US ratings this summer, beating once-dominant broadcast networks to become the most-watched US TV network between June and August, according to Nielsen Media Research.