Donald Trump has given US companies 45 days to stop dealing with ByteDance, the Chinese owner of TikTok, and WeChat, the messaging platform owned by Tencent, as he stepped up a campaign to clamp down on apps that he described as a threat to economic and national security.

Mr Trump issued two executive orders decreeing US businesses would no longer be able to work with the Chinese groups after the grace period.

The move came as Microsoft negotiates to buy TikTok, a popular short-video app, ahead of a September 15 deadline that Mr Trump had set. One US official said the 45-day window would “give Microsoft and other interested purchasers time to reach a deal with TikTok’s owners that adequately addresses the national security concerns posed by the app”.

Earlier on Thursday, the Trump administration issued recommendations that Chinese firms listed on American stock exchanges be delisted unless they provided US regulators with access to their audited accounts.

The moves came one day after Mike Pompeo, US secretary of state, signalled that the crackdown on TikTok was part of a broader campaign against Chinese tech companies with access to the data of US citizens.

“This is an effort to put pressure on TikTok and a larger plan to rupture connectivity between the US and China,” said Jim Lewis, a cyber security expert at the Center for Strategic and International Studies in Washington.

Mr Lewis said the WeChat order would have less material impact because it only affected transactions with TenCent related to the messaging app, and had no impact on the company’s gaming business. He said WeChat had only about 3m users in the US with the vast majority being Chinese.

In his order, Mr Trump said the apps captured huge amounts of data about users, creating the risk that Beijing could access the personal information of US citizens and conduct various kinds of spying. He said WeChat also allowed China to monitor its citizens when visiting the US.

While Mr Trump had previously signalled that he was preparing to ban TikTok unless the app was sold to a US company, his move against WeChat was the first time his administration had targeted the popular app.

Tencent shares fell as much as 4.2 per cent following the announcement. The company did not comment. TikTok also declined to comment.

Microsoft has been in negotiations with ByteDance to buy TikTok in the US, Canada, Australia and New Zealand. The executive order means the two parties must race to hammer out the details of what could be a tricky separation of parts of TikTok’s overseas business.

People familiar with the deal have since told the Financial Times that Microsoft was also considering acquiring TikTok’s global business, including its European and Indian arms. Mr Trump had suggested that Microsoft should try to buy TikTok’s entire global operations. 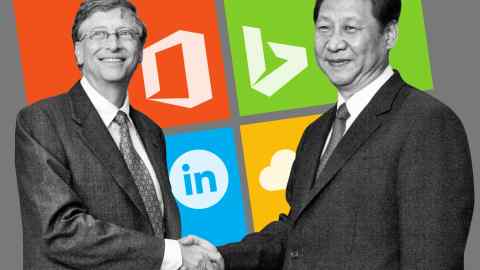 Mr Trump invoked the 1977 International Emergency Economic Powers Act to justify the bans on US companies dealing with ByteDance and with Tencent in connection with WeChat. The law provides a broad mechanism for the US government to impose restrictions related to companies deemed to pose a threat.

In its campaign against Chinese technology companies, the White House is focusing on mobile apps, following a largely successful effort to convince US allies to purge Huawei, the Chinese telecoms equipment provider, from their 5G networks.

Mr Trump has dramatically shifted his posture on China in recent months, as he tried to blame Beijing for the global spread of coronavirus. He had taken a softer line on China last year to avoid derailing talks aimed at ending the trade war. But after concluding a first phase deal and following the outbreak of Covid-19, he has adopted a harsher stance.

Most China experts in the US expect that Mr Trump will continue to ratchet up pressure on China as he campaigns for re-election in November.

Tencent, the Shenzhen-based technology company, opened a US office in 2013 with the aim of expanding WeChat’s popularity in the US. The app is used by the Chinese diaspora and businesspeople to deal with their counterparts in mainland China, where the app is a must-have utility.

WeChat heavily censors messages passed between accounts registered to Chinese mobile numbers, wherever they are in the world. According to University of Toronto’s Citizen Lab, it also surveils overseas-registered users’ messages to improve its censorship methods in China.