Trump comes close to acknowledging defeat before catching himself

For almost a week, the world has waited for Donald Trump to acknowledge the results of the November 3 election and his rival Joe Biden’s victory.

On Friday, the sitting president came closest yet.

Speaking at an event in the White House Rose Garden, Mr Trump appeared to recognise that a different administration would be in charge in January, and that it would get to decide whether or not to push for a lockdown to counter the rapid spread of Covid-19.

“This administration will not be going to a lockdown. Hopefully the . . . ,” Mr Trump said before catching himself. “Whatever happens in the future, who knows which administration it will be, I guess time will tell.”

Whatever happens in the future, who knows which administration it will be, I guess time will tell

It was the only moment during the half-hour press conference — his first set of public remarks since Mr Biden was declared the victor — that the president appeared to accept reality.

He used the remainder of the time to tout his administration’s handling of the virus and its project to speed up the development of a vaccine, while also targeting rivals — such as Andrew Cuomo, the New York governor, and Pfizer, the pharmaceuticals company.

He said Pfizer had made an “unfortunate mistake” when it said it had not accepted funding from Operation Warp Speed, the Trump administration’s public-private partnership to find a vaccine.

And he threatened to withhold the vaccine from New York state, after Mr Cuomo recently questioned the safety of a jab that had the imprimatur of the Trump administration.

But it was the verbal slip that garnered the most attention, after a week during which the president took to Twitter to make a flurry of baseless claims alleging the Democrats had stolen the election by perpetuating mass voter fraud.

The slip was one of several signs that he may be slowly if grudgingly edging towards acknowledging his defeat, even if he never formally concedes.

Geraldo Rivera, a correspondent-at-large for the conservative outlet Fox News, said that he had had a “heartfelt phone call” with the president on Friday morning and suggested Mr Trump was coming to grips with the fact he would soon be leaving office.

In the phone call, Mr Trump acknowledged he was a “realist” and would do the “right thing”, but remained “committed to fighting for every vote” and waiting to see whether states would certify the results, Mr Rivera said in a Twitter thread.

“He seemed like a heavyweight champion who is behind in points leading into the final round, but determined to fight on, knowing all the refs have scored the fight for the other guy,” Mr Rivera said.

“Still, he’s going to answer the final bell, looking for the knockout he knows is a long shot,” added Mr Rivera, who has called on Mr Trump to leave the White House with “grace” and “dignity”.

In recent days, a growing number of Republicans have either congratulated Mr Biden or urged the Trump administration to co-operate more with the president-elect’s transition team to ensure he receives the necessary intelligence briefings to prepare for office.

On Friday, John Kelly, Mr the president’s former chief of staff, warned that the Trump administration’s refusal to fully co-operate in the transition process could harm US national security.

“You lose a lot if the transition is delayed because the new people are not allowed to get their head in the game,” Mr Kelly told Politico.

Mr Kelly added: “The president, with all due respect, does not have to concede. But it’s about the nation. It hurts our national security.”

Mr Biden and other Democratic leaders have signalled they are ready to work with Republicans, particularly if the GOP holds on to control of the Senate.

Jen Psaki, an adviser to the Biden transition team, told reporters on Friday that Mr Biden had been reaching out to Republicans in recent days but had yet to speak to Mitch McConnell, the Senate majority leader.

She said Mr Biden would use the next week “to engage with Democrats and Republican leaders of both parties, inside and outside of Washington”. 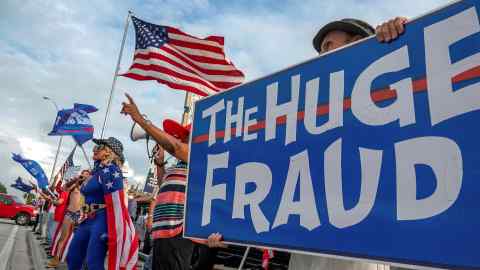 Nancy Pelosi, the House Speaker, said she, Mr Biden and Chuck Schumer — the Senate minority leader — had spoken this week to discuss areas where they might be able to co-operate with Republicans, such as infrastructure and clean energy.

And Ms Pelosi said she was “optimistic” that Congress would reach a bipartisan agreement to continue funding the government and a Covid stimulus package.

However, it was time, she said, for Republicans to accept Mr Biden as the election’s winner.

“They’re trying to distract and divide the country as they refuse to accept the election results. The election is over. Joe Biden is the president-elect, elected with a mandate of over 78 million votes,” Ms Pelosi said.