The Pennsylvania Supreme Court dealt the Trump campaign a fresh legal setback on Tuesday, finding that the city of Philadelphia did in fact allow ballot observers to watch the vote count in accordance with election law.

Donald Trump and his allies have repeatedly claimed that votes were counted in secret without observers present. In court, the Trump campaign had challenged rules at the vote count in Philadelphia that kept all observers at a distance because of the pandemic.

The court in a 5-2 decision found that the social-distancing measures were lawful, undercutting one of Mr Trump’s key complaints about his rival Joe Biden’s victory. The dissenting justices said that the issue was now moot because the count had been completed.

“Critically, we find the [City of Philadelphia Board of Elections’] regulations as applied herein were reasonable in that they allowed candidate representatives to observe the Board conducting its activities as prescribed under the Election Code,” the majority wrote.

Jenna Ellis, a Trump campaign legal adviser, said in a statement that the court’s decision was “inexplicable” and said the campaign was “keeping all legal options open to fight for election integrity and the rule of law”. 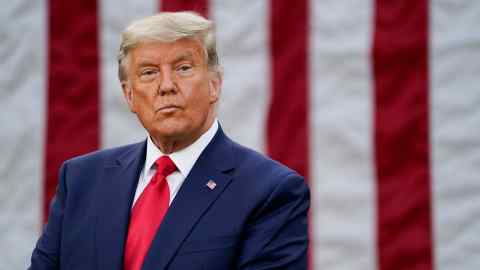 Neither of the dissenting justices endorsed the Trump campaign’s view that the question about how close observers could stand to the ballot counters had tainted the election. Indeed, Thomas Saylor, the Pennsylvania chief justice, specifically criticised the notion in his dissent.

“Short of demonstrated fraud, the notion that presumptively valid ballots cast by the Pennsylvania electorate would be disregarded based on isolated procedural irregularities that have been redressed — thus disenfranchising potentially thousands of voters — is misguided,” he wrote.

The decision was handed down at the same time as a federal judge in Pennsylvania was hearing arguments in a separate case in which the Trump campaign sought to stop Mr Biden’s win in the state being certified.

In the federal case, the Trump campaign sued the Pennsylvania secretary of state and several counties, taking aim at efforts taken by certain Democratic-controlled counties to help voters solve issues with their ballots.

The campaign claimed that such efforts were unconstitutional because counties run by Republican officials had not taken similar steps. An earlier version of the lawsuit had included complaints about election observers.

Ahead of the hearing on Tuesday, two sets of lawyers representing the Trump campaign quit the case, with the second team withdrawing on Monday evening. Rudy Giuliani, the former New York City mayor who has been a legal and political attack dog for Mr Trump, ultimately appeared in court on behalf of the campaign.

Mr Giuliani made sweeping claims of “widespread nationwide voter fraud”, claiming that elections in Democratic-run cities like Pittsburgh and Philadelphia had long been corrupt. He claimed that more than a million ballots in Pennsylvania were potentially suspect.

“These votes are way more than enough to overturn the results of the election,” he said, explaining why the case was a significant controversy that the court had to address.

His comments were branded “disgraceful” by Mark Aronchick, an attorney for the Pennsylvania counties sued in the case. Mr Aronchick similarly criticised Mr Giuliani for asking the judge to invalidate potentially more than a million ballots “based on nothing”.

The judge in that case, Matthew Brann, appeared sceptical of the Trump campaign’s lawsuit, asking Mr Giuliani of the idea he would throw out millions of ballots: “Can you tell me how this result can possibly be justified?”