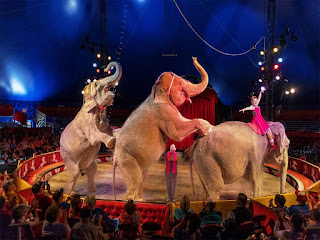 Well, it appears the circus is coming to D.C. earlier than originally expected. I can already smell the elephant manure.

The U.S. government could run out of money to pay all of its bills by early September if Congress doesn’t rush to raise the debt ceiling, according to a new study by The Bipartisan Policy Center.

In May, the BPC projected that the Treasury would have until October or November before it hit the debt ceiling.

But things have changed (sort of).

Bottom line: The Trump administration claim that the Laffer curve effect of Trump tax shifts cuts would fuel growth by such a degree that tax revenues would increase to make up for the tax cuts didn’t happen. (This should not come as a surprise to EPJ youtube viewers. SEE: Laughing at the Laffer Curve: The Trump Tax Reform Con).

G. William Hoagland, a senior vice president at the BPC, said tax revenue, particularly money paid by corporations, has lagged far behind estimates and has provided Treasury much less cash than expected, reports The Washington Post.

Of course, expect the usual drama as the ceiling is approached. Some government “services” may be temporarily closed and “non-essential” employees will be told not to come to work and their paychecks will be delayed.

But it will all be an act. Eventually, the debt ceiling will be raised and the growth of government, which causes downward pressure on the general public’s standard of living, will continue. The money that is borrowed by the government, you see, can not be used by the private sector for productive activities, it is crowded out by the crony class, which is the great beneficiary of government spending.