Travelzoo – Cost Cuts And Large Cash Balances Will See Them Through (NASDAQ:TZOO)

Travelzoo (TZOO) is an internet-based marketing firm that features deals and specials for the travel industry. The company curates a list of deals and provides them to subscribers by email and social media on a recurring basis. The attention that they get from their subscribers (who are a high propensity-to-travel group) has been valuable, and they sell ads for placement in their various publications.

The shares are up over 50% since I first published on the firm in May, but I think they have further to run. In that article, I made a number of assumptions about how the COVID-19 pandemic would affect their business. I also assumed they would shut down their money-losing Asia business and expenses would decrease as a result. After assuming deep losses and some financing costs associated with covering the cash deficit in 2020, I came to a price target of $8.99 per share. I now believe that price target is too conservative, so I wanted to re-visit the name, as I think there is a strong case for buying it right now.

One big thing that I wasn’t expecting was their success selling vouchers (see example below). The firm has pivoted from selling advertising to selling vouchers for travel. Essentially, they contract with travel providers (mostly hotels and resorts) to offer a bargain deal on future travel. The company then collects the cost of the voucher in advance, and the customer can use it later on specified dates. This allows them to collect the entire booking fee now, and gives them a good base of commission business that will convert to revenue once travel re-opens. To attract customers, these deals are fully refundable, so there will definitely be refunds due to some customers. However, they are holdings tens of millions of dollars of cash which they can use in the meantime. In fact, their cash balance is over $50M as of their most recent quarter. 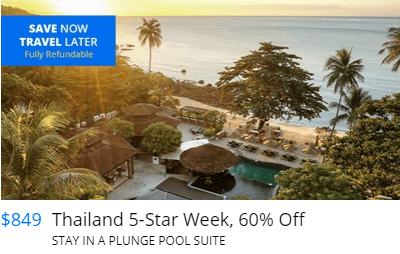 Now, that $50M of cash doesn’t entirely belong to them, as they would have to pass the majority on to the travel supplier if the customer uses the deal, or refund the entire amount if they don’t. But much like an insurance company’s float, they have use of it in the meantime. And that is stopping them from needing external financing to cover their COVID-19 related losses. The firm had no debt prior to the pandemic, but raising debt during it would have been expensive. I had estimated $6.5M of finance charges prior to the business recovering, and instead they will be collecting interest (likely nominal due to interest rates) on their large cash balances.

The other place the company has beaten my expectations since my original write-up is on the expense side. I assumed they would be able to cut all the expense from their Asia-Pacific operations, which they were shutting down, and that they’d trim elsewhere. Based on those assumptions, I came up with an estimate for their annual expenses of between $62M and $72M. But in their most recent quarter, expenses were only $12.1M, for an annualized rate of $48.4M! That is a very significant beat by the firm. Importantly, they indicated on their recent conference call that they expect those expense levels to persist going forward:

“And then, as I said, the operating expenses, we are at the level where right now we see them to remain quite stable into Q4 and not increase dramatically again, in 2021. We have made significant adjustments to our cost basis. You saw last quarter that our staff has been reduced. And we are not planning to get back to expense levels in 2021, compared to where we were before this COVID crisis.”

Those reductions in expenses will be key, because the other place I was probably off on my model was the revenue for 2021. In May, it seemed at least possible that travel demand would be returning in 2021, so I modelled 2021 as down 20% from 2019 and then adjusted for an acquisition and the shutdown of their Asia business. I now think that is probably too aggressive. That is especially true given a number of European countries are returning to lockdown, which essentially eliminates travel in those markets in the near-term, which is important for their large European operations.

I’m going to assume that their Q3 2020 results, which were essentially break-even, are all they can maintain for a year. Their backlog of sold vouchers will provide a significant tailwind once people start travelling again, as they’ll be able to book their commission from those vouchers as revenue once the vouchers are used.

One reason I believe they have done so well relative to travel industry competition during the COVID-19 pandemic is their focus on deals and leisure travelers. Leisure travel is likely to come back sooner than corporate travel, as people are more willing to take a risk for themselves than for their employer. Also, those who are traveling are very likely to want to get a deal on the travel, which should increase the percentage of the market that is addressable by Travelzoo. Even if total travel is down, if they can increase their market share that will provide an offset.

The other offset is that travel suppliers (tour companies, hotels, etc.) will be motivated by their fixed capacity and high fixed costs to increase occupancy. But if vendors decrease their prices across the board, they lose revenue even from their loyal customers who might pay more. By providing deals through an aggregator like Travelzoo, they can provide promotional pricing to the deal-focused to drive occupancy, while still holding rate on their core business. This is a form of price discrimination, and travel providers are likely to be more aggressive with that in the near term as they deal with significant vacancy.

That benefits Travelzoo in two important ways. They have a limited number of ad inventory, and if demand by travel suppliers increases, it is possible they’ll be able to charge more for it. It is also probable that the quality of the deal required to get into the newsletter will improve. If suppliers are offering better deals to their readers, that improves the value proposition of the Travelzoo newsletter for customers, making them more likely to book the deals and share the newsletter with friends. This has a bit of a flywheel affect, as better deals earn more subscribers, and more subscribers means Travelzoo has more leverage to get better deals.

Considering these factors, and the potential for a vaccine to be in widespread use within the next year, I’m going to assume that they are able to restore North American and Asian revenue to 2019 levels one year from now.

The big potential upside that I’m not accounting for is the potential of their recent Jack’s Flight Club acquisition. The company purchased a subscription business focused on flight deals. Essentially, consumers could buy a subscription to use a flight deal finding system for a small annual fee. This is different than their existing advertising business, because of the recurring revenue. That makes it much more stable than a commission or advertising based model. Jack’s is based in the UK, where the vast majority of its customers reside. Their expressed strategy for the business was to roll out the Jack’s model across Europe and North America, and give it an initial push by marketing to their existing Travelzoo subscriber base. Intuitively, it seems likely that someone interested in the hotel, cruise, activity, and tour deals offered by Travelzoo might also be interested in the air travel deals offered by Jack’s. They had good traction when they promoted Jack’s to their UK subscriber base, and I would expect that to hold true in their bigger North American and continental-European markets as well. They haven’t launched that yet, which I think makes sense. It isn’t likely that the pandemic is a good time to launch a new travel subscription, but I think there is potential for significant upside from that rollout. Becoming a more subscription heavy business would also have the potential to improve their multiple, as Jack’s is in many ways a software-as-a-service entity. All that said, I’m going to use Q3 2020 revenue from Jack’s as my go-forward assumption, which leaves plenty of room for them to outperform.

To value the firm, I’m going to make a go-forward earnings estimate. I’ve assumed that they will be back to 80% of 2019 revenue levels in a year from now. I’m further adjusting 2019 revenue by removing Asian revenue (as they shut that business down) and adding their most recent quarter revenue from Jack’s annualized (as they didn’t own it in 2019). That suggests a “mostly recovered” revenue number of $88M. Their current expense run-rate is only $48M. For conservatism, I’ll assume they aren’t able to keep things that low on the expense side and use my previous expense estimate for 2021 of $72M. That leaves an earnings estimate of $16M. Using the same 12X earnings multiple I used in my previous analysis suggests a market capitalization of $192M, or $16.98 per share. Taking off another 10% for the time value of money in the year where I assume they are only breaking even provides a price target of $15.28. That is approximately double the current $7.57 share price.

There are obviously significant uncertainties here, especially around the length and depth of the ongoing pandemic. However, the underlying business is of good quality, with minimal capital expenditure required. If they can grow their subscription business on the other side of the pandemic, a 12X earnings multiple will likely prove extremely conservative, so it is possible that the shares will outpace this price target. It is also possible that they will begin to lose money again if economies move back into more of a lockdown phase. However, I think their significant cash balances will insulate them from any liquidity challenges until the other side of the pandemic, which is more than can be said about many other travel related businesses.

To be notified of pieces on underfollowed microcaps, hit the orange follow button at the top!

Most of my best ideas are not released to the public, and are instead exclusive for members of The Microcap Review. Members get value stock ideas, plus net-net ideas, plus multiple special situation ideas every month. The special situations include merger arbitrage, liquidations, tenders and more. I am currently offering a two week free trial for new subscribers. That free trial allows you to check the service out with absolutely no risk, and if it isn’t for you, cancel online with zero hassle.

Disclosure: I am/we are long TZOO. I wrote this article myself, and it expresses my own opinions. I am not receiving compensation for it (other than from Seeking Alpha). I have no business relationship with any company whose stock is mentioned in this article.

Previous PostBack to the Future for US New Vehicle Sales: The 2.4-Million-Vehicle Hole in 2020Next PostThe bonds that bind – Why the bond market might keep America’s next president awake at night | Finance & economics