New data from the U.S. Energy Information Administration [EIA] confirms what the markets have been predicting for weeks: U.S. gasoline demand is in free-fall as Americans respond to the COVID-19 pandemic by remaining at home. Weekly consumption first began to decline for the period ending March 20, falling by 3% YoY as stay-at-home orders took effect in states representing 31% of the U.S. economy. By March 27, with more than 50% of Americans having canceled travel plans and finding themselves engaged in social distancing, weekly gasoline demand was 27% lower on a YoY basis. That week’s result, at 6.6 MMbpd, was the lowest demand volume recorded in March since at least 1990 (see figure). 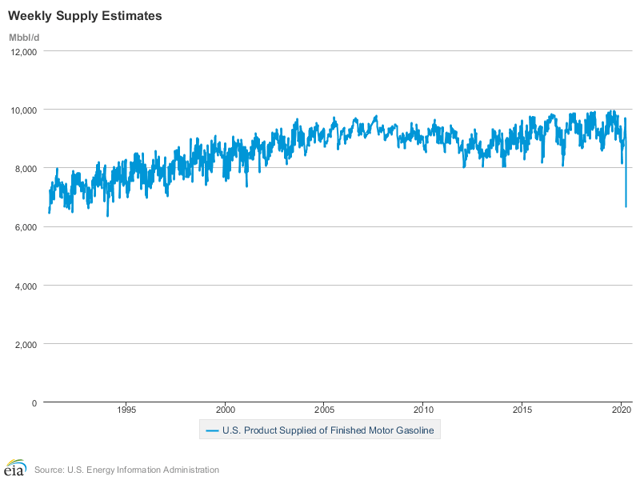 Gasoline demand can be expected to have collapsed still further last week given that 90% of the U.S. population has now been ordered to stay home by state governments. A demand shock of this type is unprecedented in modern U.S. history and, at least in percentage terms, is reminiscent of the most bearish future “peak demand” vehicle electrification scenarios. To put the current 2.4 MMbpd reduction to U.S. gasoline demand in perspective, the IEA has predicted that electric vehicles will reduce global demand for all petroleum products by a similar amount in 2030. The COVID-19 pandemic has, at least temporarily, accomplished what the world’s electric vehicle manufacturers are not expected to achieve for another decade.

Notably, demand for distillate fuel oil, including diesel fuel, has not declined by nearly the same amount as gasoline on a percentage basis. Consumption volumes for the weeks ending March 20 and March 27 were lower by 10% and 6%, respectively, than in the same periods of 2019. Indeed, one need only look back to the first week of March 2019 to see the last time that weekly distillate fuel oil demand fell below 4 MMbpd in that month (see figure). 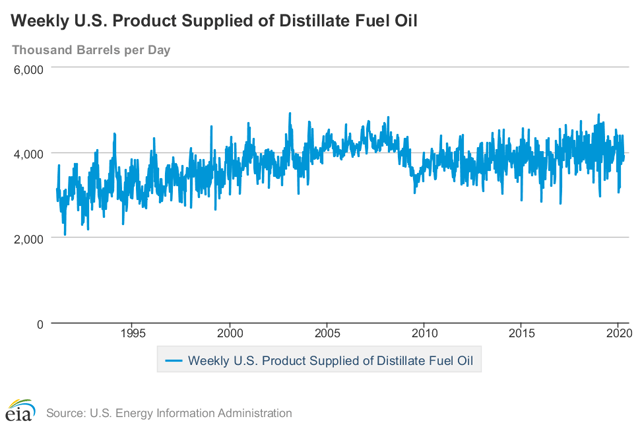 The discrepancy between gasoline demand and distillate fuel oil demand can be attributed to the unique nature of the COVID-19 pandemic response. Whereas diesel fuel consumption often declines by as much as or more than gasoline demand during economic downturns due to reduced industrial activity, the current reduction to demand is occurring under very different conditions. Consumers are stockpiling goods and, since such stockpiling is occurring at a time when their outdoor activities are being restricted, much of this is being done online. Shopping that used to contribute to gasoline demand as consumers drove their personal vehicles to the stores is now being delivered by diesel engines. Factories in “essential” industries are continuing to operate. Moreover, heating oil demand (another distillate fuel) has remained strong as Americans in the Northeast U.S. have remained at home during the day, shifting space heating from businesses to residences.

This situation is causing disparate impacts within the downstream transportation fuel sector. Merchant refiners, unable to utilize diversified upstream operations and forced to rely on crack spreads that are weighted heavily towards gasoline, have incurred very steep share price declines in 2020 to date (see figure). Even last week’s rally was unable to prevent CVR Energy (CVI), Delek US Holdings (DK), HollyFrontier (HFC), Marathon Petroleum (MPC), PBF Energy (PBF), and Valero Energy (VLO) from all recording share price declines of more than 50% YTD. The worst performer of the group, PBF Energy, is even being priced for possible insolvency with a tangible price-to-book value ratio of 0.23x.

Downstream logistics MLPs have found themselves in a new operating environment that is just as negative as the one that merchant refiners are in. These MLPs generate income primarily via throughput volumes rather than operating margin expansion. Their product mixes also are weighted heavily toward gasoline rather than distillate fuels (reflecting the overall U.S. demand ratio of the two products). Of Delek Logistics Partners (DKL), Holly Energy Partners (HEP), MPLX (MPLX), and PBF Logistics (PBFX), only Holly has avoided recording a unit price decline of 50% or more in 2020 to date (see figure). The unit prices of the two that are especially reliant on their small-footprint sponsors for throughput volumes, Delek Logistics Partners and PBF Logistics, have fallen by as much as 80% over the same period.

Nor has the damage been limited to petroleum-derived fuels. Most of the gasoline that is sold in the U.S. contains up to 10 vol% of fuel ethanol due to the federal biofuels blending mandate. A quirk in the timing of that mandate’s annual implementation has caused ethanol demand to decline alongside that of gasoline. The weekly volume of ethanol blended with gasoline by refiners and retailers dropped by 34% YoY in the week ending March 27 to 0.6 MMbpd, a decade low (see figure). 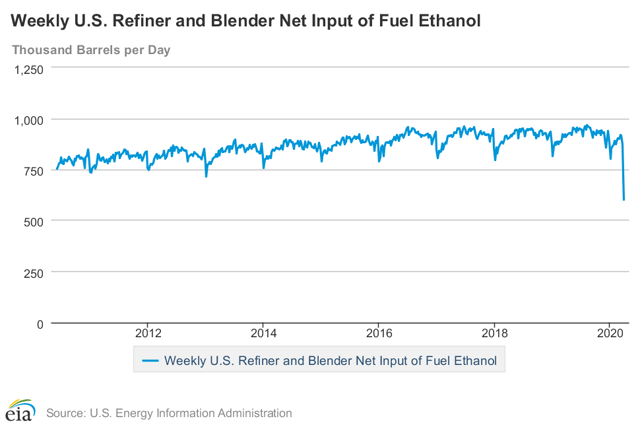 Ethanol production had been running higher than in the same period of 2019 as late as the week ending March 20. It has started to decline as well, though, with weekly production falling by 16% YoY for the week ending March 27. Production volumes can be expected to decline further in April now that almost a quarter of U.S. ethanol production capacity has been idled in response to low margins. It is likely that weekly production volumes will actually fall below the decade lows that were set in the aftermath of the 2012 drought in the Midwest (see figure). 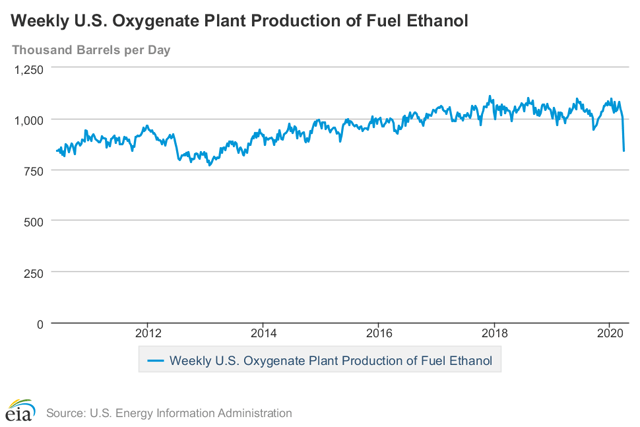 Independent ethanol producers Green Plains, Inc. (GPRE), Pacific Ethanol (PEIX), and REX American Resources (REX), as well as ethanol logistics MLP Green Plains Partners (GPP), have all seen their share/unit prices decline by 50% or more in 2020 YTD (see figure), placing their performance on par with the merchant refining sector. From a strictly margin perspective the ethanol sector faces two additional headwinds that refiners have avoided: a feedstock price that is not directly linked to that of petroleum (the price of corn is only down 14% YTD) and a product mix that is even more focused on gasoline than that of refiners (ethanol only competes with gasoline). On the other hand, ethanol demand under the mandate can be expected to rapidly rebound to 2019’s volumes as 2021 approaches, regardless of what happens to gasoline demand.

The longer-term impact of the COVID-19 pandemic to U.S. gasoline demand is very uncertain. At some point social distancing will end and Americans will return to their fuel-intensive commuting and vacation patterns. This demand rebound can be expected to occur sometime in 2021 at the latest given prevailing expectations about the timeline for development and distribution of a vaccine. Until more is known about how the coronavirus behaves during the warm and wet summer months, how immunity develops naturally, and how much of the U.S. population has been infected during this first wave, though, it cannot be accurately predicted at this time if and when a sustained demand rebound will occur during the interim. With U.S. gasoline demand expected to be up to 4.1 MMbpd lower than normal so long as widespread social distancing measures remain in effect, 2020’s total gasoline demand could end up being substantially lower than was expected even a week ago.

Disclosure: I am/we are long DK, REX, VLO. I wrote this article myself, and it expresses my own opinions. I am not receiving compensation for it (other than from Seeking Alpha). I have no business relationship with any company whose stock is mentioned in this article.