Chinese imports of American-made goods were down 22 percent last month when compared to a year earlier, as the U.S.-China trade war shows few signs of slowing down.

Exports to the U.S. of Chinese-made goods, meanwhile, sank 16 percent to $44.4 billion, according to customs data.

Both countries have raised tariffs on billions of dollars’ worth of each other’s imports, with the U.S. levying complaints over its trade deficit with Beijing and technology development plans, which violate Chinese market-opening commitments, according to the United States and its trading partners.

The U.S. and China are scheduled to restart negotiations in October in a move to quell the growing trade war as it continues to hamper global economic growth.

Meanwhile, Chinese exporters are beginning to feel the pressure as consumer demand abroad weakens, with markets to replace the U.S. becoming increasingly harder to find.

“The tit-for-tat escalation shows how unlikely a trade deal and de-escalation have become,” Louis Kuijs of Oxford Economics wrote in a recent report. “Meanwhile, the global trade weakness looks set to linger, which will continue to weigh on demand for China’s exports.” 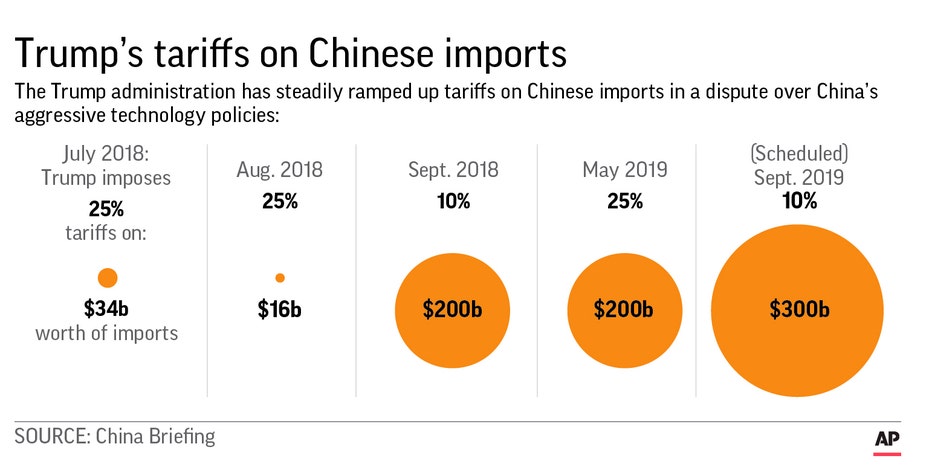 For the first eight months of 2019, exports were off 1 percent compared to a year earlier and imports down 5.6 percent.

Negotiations between the U.S. and China fell apart in May due to disagreements over how to enforce agreements between them, with Beijing demanding Trump lift the ever-growing retaliatory tariffs once an agreement between the two countries is reached and goes in to effect. That demand will prove to be a difficult compromise for the U.S., as Washington claims some tariffs must remain in place to hold Beijing accountable for any agreements it makes.

In June, both Trump and Jinping agreed to renew negotiations, but those discussions ended a few weeks later in July with little progress.

While both governments agreed on resuming talks in September, that time frame was further pushed back to October, where an exact date has still yet to be announced.

On Sept. 1, Trump imposed 15 percent tariffs on $112 billion worth of Chinese imports, with plans to tax another $160 billion beginning Dec. 15 that would effectively impose penalties on nearly everything the U.S. buys from China.

In response, Beijing imposed their own tariffs on U.S. imports, ranging from 10 percent and 5 percent on a variety of American-made goods. Additional retaliatory tariff increases will likely take place if and once the U.S. enforces its planned penalties on Dec. 15.

China has taken a series of other retaliatory measures against the U.S., canceling purchases of soybeans, which is the biggest U.S. export to China, while imposing or announcing penalties on roughly $120 billion of U.S. imports.

As it stands now, only $50 billion of U.S.-made goods sent to China are not being affected by the tariff penalties.