This article part of a series that provides an ongoing analysis of the changes made to Harris Associates’ 13F stock portfolio on a quarterly basis. It is based on Harris Associates’ regulatory 13F Form filed on 05/15/2020. William Nygren’s 13F portfolio value decreased ~36% from $56.41B to $36.11B this quarter. The portfolio is diversified with recent 13F reports showing around 200 positions although most of them are very small. There are 66 securities that are significantly large (more than ~0.5% of the portfolio each) and they are the focus of this article. The largest five stakes are Alphabet (NASDAQ:GOOG) (NASDAQ:GOOGL), Bank of America (NYSE:BAC), Charter Communications (NASDAQ:CHTR), Citigroup (NYSE:C), and General Motors (NYSE:GM). They add up to ~24% of the portfolio. Please visit our Tracking William Nygren’s Harris Associates Portfolio series to get an idea of their investment philosophy and the fund’s moves during Q4 2019.

Harris Associates currently has ~$120B under management. Its flag ship mutual funds are the Oakmark Fund (OAKMX) incepted in 1991 and the Oakmark International (OAKIX) incepted in 1992. Both funds have produced substantial alpha during their lifetimes – 12.5% annualized return compared to 10% for the S&P 500 index for OAKMX and 9.4% annualized return for OAKIX compared to 6.07% annualized for the MSCI World ex-US Index. The other mutual funds in the group are Oakmark Select (OAKLX), Oakmark Equity and Income (OAKBX), Oakmark Global (OAKGX), Oakmark Global Select (OAKWX), and Oakmark International Small Cap (OAKEX).

Note 2: In an April interview, it was disclosed that Nygren is building stakes in Pinterest (PINS), Workday (WDAY), and Match Group (MTCH).

American Express (AXP): The small 0.49% of the portfolio position was purchased this quarter at prices between ~$69 and ~$137 and the stock currently trades at ~$102. In an interview last month, Nygren said he thinks AXP will earn between $4 and $5 per share this year and that could double in a couple of years. He also said compared to the financial crisis when the stock crashed to the low-teens, the difference now is that the firm is funded by long-term debt and so there is no risk of a liquidity crunch.

American Airlines (AAL) and Willis Towers Watson (WLTW): These very small (less than ~1% of the portfolio each) positions were disposed during the quarter.

General Motors: GM is a top-five position at 3.48% of the portfolio. It is a very long-term stake. The original position was minutely small in 2007 and it was disposed the following year. In 2013, a huge ~70M share stake was established at prices between $27 and $41. The position size peaked at ~81M shares in 2015. The stake was since sold down by ~25% at prices between $28 and $46. The stock currently trades at ~$28. Last two quarters have seen a minor increase.

Note: Oakmark has a ~19% ownership stake in Liberty Global.

Note: Oakmark has a ~6.5% ownership stake in Ryanair Holdings.

Below is a spreadsheet that shows the changes to William Nygren’s Harris Associates 13F portfolio holdings as of Q1 2020: 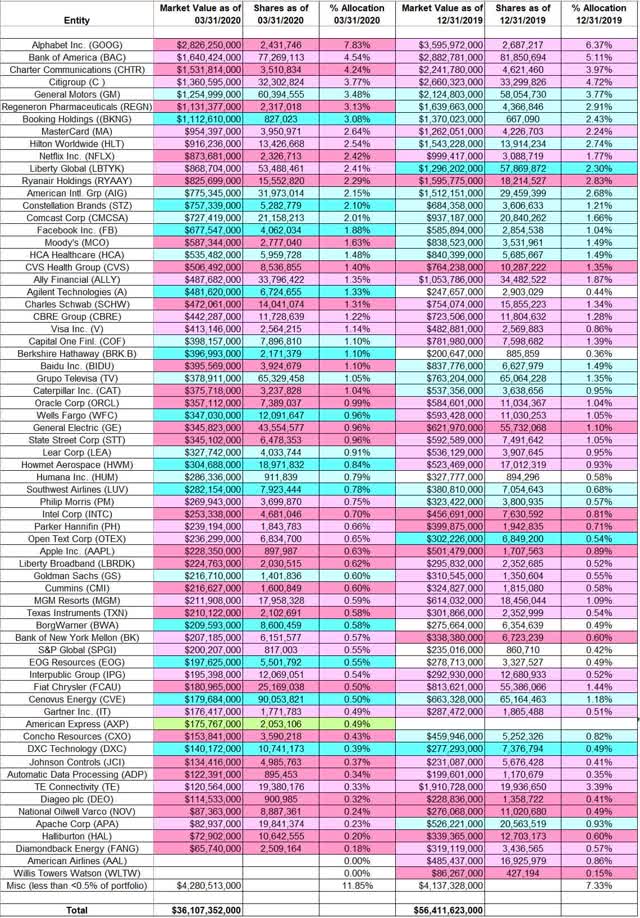 Disclosure: I am/we are long BAC, BRK.B, GE, GOOGL, LBTYK, PM, TV, WFC. I wrote this article myself, and it expresses my own opinions. I am not receiving compensation for it (other than from Seeking Alpha). I have no business relationship with any company whose stock is mentioned in this article.