This article is part of a series that provides an ongoing analysis of the changes made to Tweedy Browne’s 13F portfolio on a quarterly basis. It is based on Tweedy Browne’s regulatory 13F Form filed on 08/11/2020. Please visit our Tracking Tweedy Browne Portfolio series to get an idea of their investment philosophy and our previous update for the fund’s moves during Q1 2020.

This quarter, Tweedy Browne’s 13F portfolio value increased ~16%, from $2.15B to $2.51B. The number of holdings decreased from 46 to 43. The largest position is Alphabet at ~14% of the portfolio. The five largest individual stock positions are Alphabet (GOOG, GOOGL), Berkshire Hathaway (BRK.A, BRK.B), Johnson & Johnson (JNJ), Cisco Systems (CSCO), and Baidu (BIDU). Combined, they are at ~55% of the portfolio. 28 of the 43 13F stakes are significantly large (over ~0.5% of the 13F portfolio each), and they are the focus of this article.

Tweedy Browne has released a number of investment research papers over the years, and that is a valuable resource for anyone looking to learn from their value investing philosophy. Also, Christopher Browne authored the book The Little Book of Value Investing, a great introduction.

Coca-Cola FEMSA (KOF): The fairly large 4.80% KOF was built over the last three quarters at prices between $38 and $65. The stock currently trades at ~$43. For investors attempting to follow, KOF is a good option to consider for further research.

Note: The prices quoted above are adjusted for the 2-for-1 stock split in February 2017.

American Express (AXP), U.S. Bancorp (USB), and Unilever (UN, UL): These small positions (less than ~1.5% of the 13F portfolio each) were increased during the quarter.

Johnson & Johnson: JNJ is a large (top-three) position in the portfolio at ~10%. It is a long-term stake. The position was built from 400K shares to just over 4.3M shares between 2009 and 2012 at prices between $48 and $72. Since then, the stake had seen minor selling in most quarters. Q4 2016 saw a ~20% reduction at prices between $111 and $120, and that was followed with minor trimming over the last three years. The share count is now at ~1.84M. The stock currently trades at ~$150. Tweedy Browne is harvesting long-term gains from this position.

Note: Tweedy Browne’s third-quarter commentary said that they purchased FOX at a price estimated to be at 8% earnings yield. Also, they mentioned the focus on live programming, profitability of Fox News, and insider buying as attractive attributes.

Note: The figures quoted above are adjusted for the May 1, 2012 COP spinoff of Phillips 66, whereby COP shareholders received one share of Phillips 66 for every 2 shares of COP.

Note: Although the 13F position is small, the firm has large stakes in Diageo and Novartis. The rest are held in their native markets, which are outside the realm of 13F filings.

Note: GlaxoSmithKline, HSBC, Royal Dutch Shell, and Total SA are top positions in the firm. Shares in these European businesses are primarily held in their native markets, and so, are outside the realm of US 13F filings.

The spreadsheet below highlights changes to Tweedy Browne’s 13F stock holdings in Q2 2020: 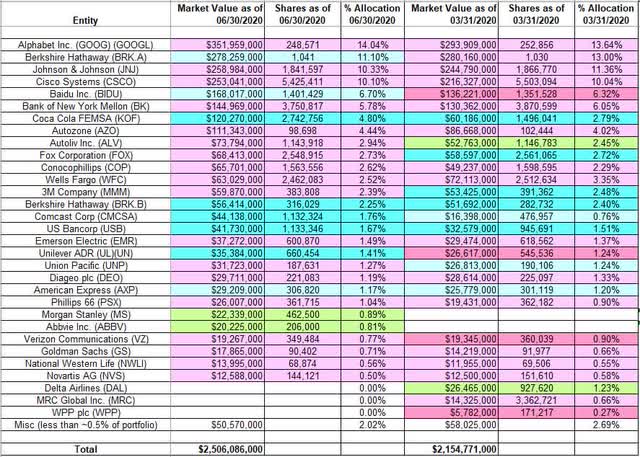 Disclosure: I am/we are long ABBV, BRK.B, GOOGL, GSK, WFC. I wrote this article myself, and it expresses my own opinions. I am not receiving compensation for it (other than from Seeking Alpha). I have no business relationship with any company whose stock is mentioned in this article.

Previous PostU.S. leaves tariffs on Airbus aircraft unchanged at 15%Next PostThis Is Amerika: Where Fascism, Totalitarianism And Militarism Go Hand-In-Hand