This article is part of a series that provides an ongoing analysis of the changes made to Prem Watsa’s 13F portfolio on a quarterly basis. It is based on Watsa’s regulatory 13F Form filed on 11/13/2020. Please visit our Tracking Prem Watsa’s Fairfax Financial Holdings Portfolio series to get an idea of his investment philosophy and our previous update for the fund’s moves during Q2 2020.

This quarter, Watsa’s 13F portfolio value increased ~11% from $1.59B to $1.77B. There are 60 securities in the portfolio, but it is concentrated among a few large stakes. The focus of this article is on the larger (greater than 0.5% of the portfolio each) equity holdings. The top three positions are Atlas Corp., BlackBerry, and Kennedy-Wilson. Together, they account for ~73% of the entire 13F portfolio.

Note: Fairfax Financials’ (OTCPK:FRFHF) 13F holdings only represent a small portion of their overall investment portfolio. The total size as of Q3 2020 was ~$40B of which ~29% is in cash and short-term positions. Prominent equity allocations include investments in Greece, India (OTCPK:FFXDF), and Africa (OTCPK:FFXXF). They have a huge position in CPI linked derivative contracts ($75.7B notional amount, $12.1M fair value, 2.9 years average maturity) designed to protect against global deflation. FRFHF currently trades at ~$317, well below Book Value (Q3 2020) of ~$442 per share. The equity portfolio was 100% hedged starting from around 2003 but those were removed in Q4 2016.

Note: Regulatory filings from March show them owning 126.25M shares (46.5% of the business). This is compared to 100M shares in the 13F report. Last January, Fairfax added $500M more in a structure like the first tranche made in March 2018 (debt + warrants converted early). Total investment is $1B – $500M each in equity (38.46M warrants * 2 converted at $6.50 per share) and debt. The early conversion of warrants in July last year resulted in Fairfax also getting 25M in 7-year warrants exercisable at $8.05 per share.

BlackBerry Ltd. (BB): BB is Watsa’s second-largest position at ~12% of the portfolio. The stake was first purchased in 2010 at around $50 for 2M shares. The position was aggressively built up to 46.7M shares in the following years. Their net cost on a fully converted basis is ~$10 per share and the stock currently trades at $5.11. There has only been very minor activity in the last six years.

Note: The original 2010 stake was from a private placement for Kennedy-Wilson convertible preferred stock. The total investment from that point through Q3 2016 was $645M. Since then, they have invested another ~$85M. By EOY 2015, they had already received distributions of $625M and so the net investment was ~$105M. That is compared to current market value of ~$200M.

Resolute Forest Products (RFP): The RFP stake is now at ~8% of the portfolio. The position was first established in Q4 2010 when it was named Abitibi Bowater and the stake has since been more than doubled. Over the years, their net investment in RFP was $745M ($24.39 per share) and the current value is ~$153M (~$5 per share) – in the books, the carrying value listed is ~$166M as they wrote down losses.

Gildan Activewear (GIL): GIL is a very small 0.81% of the portfolio position established last quarter at prices between $12.50 and $18 and the stock currently trades at $23.89.

Diamond S Shipping (DSSI): DSSI is a small 0.40% of the portfolio stake established in Q2 2019 because of its Direct Listing in March. Fairfax’s investment goes back to 2011 when they were part of a $1B funding round headed by Wilbur Ross. Shares started trading at $10.40 and currently goes for $6.11.

Chevron Inc. (CVX) and Booking Holdings (BKNG): These two are very small (less than ~1% of the portfolio each) stakes established in Q1 2020 and kept steady this quarter.

Note: Greek allocation in the investment portfolio primarily consists of Eurobank (OTCPK:EGFEY) (OTCPK:EGFEF) and Praktiker. Grivalia Properties merged into Eurobank in Q2 2019 and Watsa’s 52.4% stake got converted to Eurobank shares. Fairfax now owns ~30.5% of Eurobank. Their overall investment was ~$1.16B and its current value is around half that.

The spreadsheet below highlights changes to Watsa’s 13F stock holdings in Q3 2020: 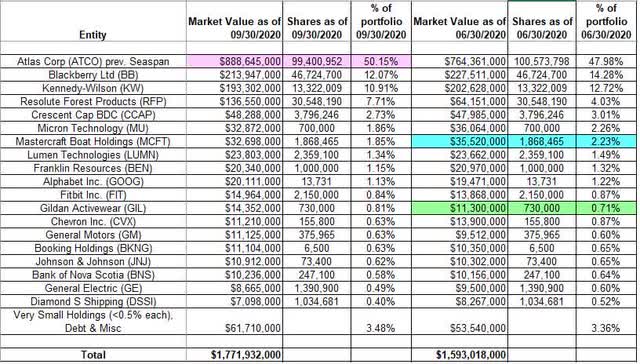 Disclosure: I am/we are long BB, BRK.B, GE, LUMN, FRFHF. I wrote this article myself, and it expresses my own opinions. I am not receiving compensation for it (other than from Seeking Alpha). I have no business relationship with any company whose stock is mentioned in this article.