This article is part of a series that provides an ongoing analysis of the changes made to Carl Icahn’s 13F portfolio on a quarterly basis. It is based on Icahn’s regulatory 13F Form filed on 08/14/2020. Please visit our Tracking Carl Icahn’s Portfolio series to get an idea of his investment philosophy and our previous update for the fund’s moves during Q1 2020.

This quarter, Icahn’s 13F portfolio value increased ~10% from $18B to $19.72B. The number of holdings decreased from 19 to 16. The portfolio is very concentrated with the largest five positions accounting for ~81% of the entire holdings: Icahn Enterprises, Occidental Petroleum, Herbalife, CVR Energy, and Caesars Entertainment.

Carl Icahn is best known for building sizable stakes in businesses and then pushing for changes to increase shareholder value.

Note 1: it was disclosed earlier this month that Icahn had made ~$1.3B shorting the CMBX 6 index (aka “mall short”). The position was put in place in November, well before COVID-19.

Note: Last November, Xerox offered $22 per share ($17 cash and 0.137 Xerox for each HP) to buy HP. The offer was later increased to $24 per share. In late March, Xerox abandoned the plan.

Note: Icahn owned around 39% of the business. Their overall cost-basis was in the high-30s. The prices quoted above are adjusted for the Herc Holdings spinoff in Q2 2016.

Note: Last August, it was announced that Carl Icahn had reached an agreement with management at Cloudera: in exchange to keeping his ownership interest capped at ~20%, he got to nominate two directors to the company’s board.

Note: Icahn’s ownership stake in the business is ~8.5%.

Note: The Class B non-voting shares are not in the 13F report.

Note 1: Regulatory filings from earlier this month show them owning 20.5M shares of Herbalife. This is compared to 35.23M shares in the 13F report. 14.72M shares were sold back to the company at $48.75 per share following Herbalife’s self-tender offer. Icahn still controls ~16% of the business.

Note 2: The prices quoted above are adjusted for a 2-for-1 stock-split done in April 2018.

Note 1: Two MLPs were carved out since the 2012 tender: CVR Refining the refining portion and CVR Partners (UAN) the nitrogen fertilizer unit. CVR Energy had majority ownership stake in both. In August 2015, CVR Partners agreed to merge with Rentech Nitrogen. Q2 2018 saw a tender offer whereby new CVR Energy shares were exchanged for CVRR at a valuation of $24.26 per common unit (0.6335 shares of CVI for one CVRR). ~22M new shares were issued.

Caesars Entertainment (CZR): The original position (old Caesars) was disclosed in a regulatory filing last March which showed them owning 66.05M shares of Caesars Entertainment (~10% of the business). This included ~5.8M shares in convertible bonds. Total outlay was $646M for a cost-basis of $9.78 per share. The position was since increased to ~120M shares of beneficial ownership (17.55% of business, majority thru equity swaps and convertible bonds). Icahn pushed for a sale of the company and in April Anthony Rodio who previously ran Icahn’s Tropicana Entertainment was appointed CEO in a deal with the company. In June Eldorado Resorts (ERI) agreed to buy the company in a cash-and-stock deal ($8.40 cash and 0.0899 ERI shares for each share of old CZR held). The transaction closed last month, and the combined business took the Caesar’s name.

Note: In April last year, rival activist Starboard Value came to an agreement with Carl Icahn whereby they now together control Newell’s board.

Note: Icahn controls ~17% of the business.

Note 2: In December 2017, Icahn launched a proxy battle nominating four new board members in an effort to stop the Xerox-Fujifilm deal announced earlier. Last May, Xerox scrapped the deal with Fujifilm in a settlement with Icahn and Darwin Deason (another activist alongside Icahn).

Note 3: Icahn’s activism earned him three board seats in 2016. Xerox spun-off Conduent and that transaction closed in January 2017. That was followed with a 1:4 stock-split in June. The prices quoted above are adjusted for these two transactions.

Note: Icahn controls ~16% of the business.

Note: Their ownership interest in Conduent is at ~18% of the business. Earlier this month, Hunter Gray was appointed to the Board of Directors.

Welbilt Inc. (WBT) previously Manitowoc Foodservice: The very small 0.37% of the portfolio WBT stake was established as a result of the spin-off from Manitowoc. The spin-off terms called for one share of WBT for each share of MTW held. Icahn held 10.58M shares of MTW for which he received the same number of WBT shares. Regular-way trading started in early March 2016 with WBT at $13.41. It currently trades at $7.37 compared to Icahn’s overall cost-basis of ~$13. There was a ~18% stake increase last quarter.

Note: Icahn controls ~10% of the business.

Note: Icahn has a 13.51% ownership stake in the business. He lobbied the board and succeeded in ending the Bonanza Creek acquisition on December 28, 2017. In June 2018, Icahn gained control of SandRidge’s board by winning a proxy battle.

Note: Icahn also owns significant stakes in the following OTC stocks as per latest regulatory filings: ~15% of Enzon Pharmaceuticals (OTC:ENZN), and ~79% of Viskase Companies (OTCPK:VKSC). He is also known to have a position in Fannie/Freddie (OTCQB:FNMA) (OTCQB:FMCC). Also, Jordan Bleznick was appointed to the Board of Directors at Enzon Pharma earlier this month.

The spreadsheet below highlights changes to Icahn’s 13F stock holdings in Q2 2020: 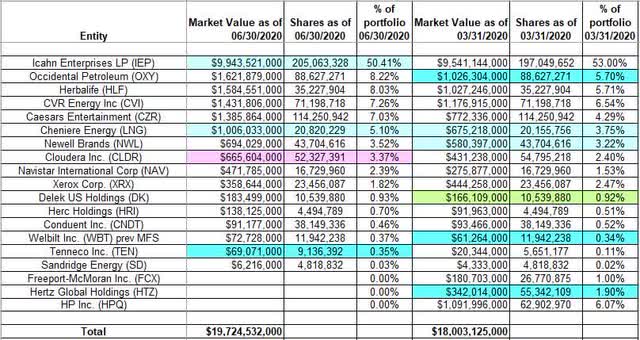 Disclosure: I am/we are long FNMA, FMCC, NWL. I wrote this article myself, and it expresses my own opinions. I am not receiving compensation for it (other than from Seeking Alpha). I have no business relationship with any company whose stock is mentioned in this article.