Tourmaline has been expanding production via acquisitions in a financially prudent manner, funding the acquisitions primarily with stock and royalty sales. Its most recent acquisitions should boost its production by over 20%, while increasing its net debt by less than 10% (including the effect of the royalty sale).

Tourmaline’s 2021 results may not be as strong as it previously anticipated, due to a significant decline in 2021 natural gas price expectations compared to late October/early November. That being said, Tourmaline can still keep production flat and generate close to $300 million in positive cash flow after dividends at current 2021 strip prices.

Tourmaline primarily trades under the ticker TOU on the Toronto Stock Exchange. An exchange rate of $1.30 CAD to $1.00 USD is used for this report.

The net effect of all these transactions is that Tourmaline’s net debt will increase by around $135 million for now. Tourmaline expects that the Jupiter and Modern acquisitions will add $100+ million per year in positive cash flow (after capex) going forward.

Tourmaline expects its production to average 400,000 BOEPD in 2021. This consists of approximately 78% natural gas, 13% NGLs and 8% light and medium crude oil. This is essentially flat production compared to its expected 2020 exit rate production (from Q3 2020 assets) of 325,000 BOEPD, plus its Jupiter and Modern acquisitions (current production of 76,000 BOEPD).

This includes a $50 million deduction to account for cash flow attributable to Topaz Energy, adjusted for the dividends (at current levels) Tourmaline receives from Topaz. This gives a better picture of Tourmaline’s results excluding Topaz.

READ ALSO  How to use your iPhone's health-tracking features

Tourmaline is budgeting $1.1 billion CAD ($846 million) for capital expenditures in 2021. This leads to a projection that Tourmaline will have $295 million in positive cash flow after dividends (of $0.56 CAD or $0.43 per share) in 2021 at current strip prices.

While Tourmaline is still expected to generate a substantial amount of positive cash flow in 2021, AECO futures for 2021 have fallen a fair bit since late October/early November. Thus Tourmaline may generate around $250 million lower cash flow than what it forecasted with its Q3 2020 report (which involved AECO close to $3.00 CAD or $2.30 and Henry Hub at around $3.11). Current strip prices for both are around 50 cents lower (CAD for AECO and USD for Henry Hub) now. 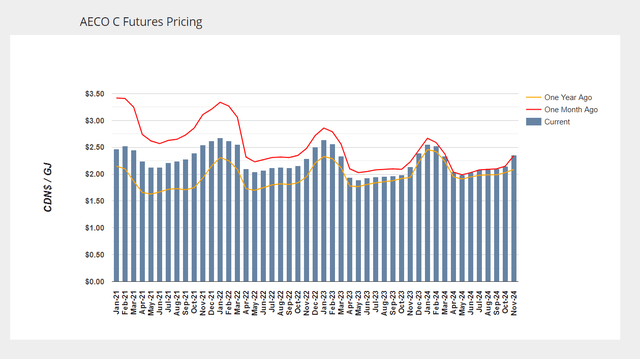 Tourmaline reported $1.375 billion in net debt at the end of Q3 2020. Between its various transactions and its positive cash flow, Tourmaline’s net debt is currently projected to be approximately $1.115 billion at the end of 2021. This is around 0.9x Tourmaline’s projected 2021 EBITDAX (excluding Topaz), which is a reasonable amount of debt.

Lower expectations for natural gas prices mean that Tourmaline may generate close to $300 million in positive cash flow after dividends in 2021 now compared to the over $500 million that it could have generated at late October/early November strip prices. Tourmaline is still in excellent shape with a limited debt load. It is also growing production substantially via solidly priced acquisitions that are funded with only a modest amount of additional net debt.

Despite lower natural gas prices, Tourmaline still appears to have some upside, with its estimated value in the mid-to-upper teens in USD.

We are currently offering a free two-week trial to Distressed Value Investing. Join our community to receive exclusive research about various energy companies and other opportunities along with full access to my portfolio of historical research that now includes over 1,000 reports on over 100 companies.