Listed companies have increased their cash donations to Democratic groups this year, a sign that executives are trying to win favour with liberals on expectations of conservative defeats nationwide in the November elections.

The Democratic Attorneys General Association and other Democratic groups have raised $5m, or 13 per cent, more in 2020 than in the 2016 election cycle, according to an analysis from the Center for Political Accountability.

Meanwhile, their Republican counterparts have seen corporate contributions fall $10m, or 15 per cent. Corporate trade association contributions to Republican groups have been cut in half to $9.5m, the CPA said.

While the dollar amounts companies give to these groups are typically only a few hundred thousand dollars, the funds can help win friends in powerful places. Last year, dozens of state attorneys-general started investigating Google, Facebook, Amazon and others for possible anti-competitive practices.

Already in 2020, the Democratic Attorneys General Association has raked in $19.4m from companies and their trade associations, compared with $9.8m during the previous presidential election cycle in 2016.

Companies often shift their contributions to individuals who are ahead in the polls, said Brendan Quinn, a manager at the Center for Responsive Politics, which tracks money in US politics.

“If the winds are shifting in one party’s favour that is who they are going to support,” Mr Quinn said. If a politician is running behind in the polls, companies might give less “considering that would be a waste of money if she or he loses.”

Companies are increasingly expecting Mr Biden to win the White House. Three quarters of business leaders surveyed by the Yale School of Management on September 23 said they would be voting for Mr Biden, the Democratic presidential candidate, over Donald Trump and 62 per cent of these business leaders believed Mr Biden would win.

Mr Biden has a 75 per cent to 85 per cent chance of winning the election, according to some prediction markets, Goldman Sachs said in a September 24 report.

Companies continue to donate to Republican lawmakers and organisations. Republican governors and attorneys-general associations continue to raise more money than the Democrats, but the liberals are catching up this year, CPA said.

Mr Quinn said the change in donations has been most notable for financial services, insurance and real estate companies. These firms have given $63.8m this year in political contributions — 55 per cent to Republicans and 45 per cent to Democrats, according to the Center for Responsive Politics. That partisan split was 65 per cent and 35 per cent in 2016. 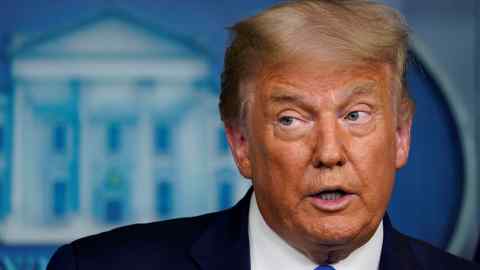 “The gap is narrowing,” Mr Quinn said. This year, “it looks like they are more and more hesitant to support the president”.

The Democratic and Republican attorneys-general associations are 527 groups, named after a section of the tax code. These organisations can raise unlimited funds from companies, individuals and labour unions. Donations are disclosed to the Internal Revenue Service where they are harder to track than corporate contributions sent directly to politicians. Some companies disclose their 527 giving on their websites, but many do not.

As companies increase their contributions to state attorneys-general associations, corporate political spending is coming under new scrutiny. Investors are increasingly demanding companies disclose more information. A majority of shareholders at Chevron’s annual meeting this year called for the company to publish a report about how its lobbying payments align with the Paris climate accord.

Companies face increasing reputational risks when giving to 527 groups, said Bruce Freed, CPA’s president. A public outcry over a controversial donation “can hit them reputationally and then hit their bottom line,” he said.