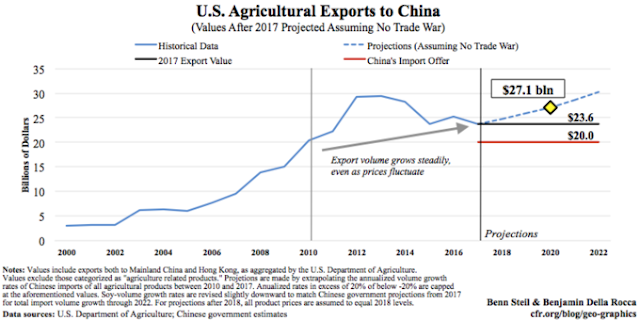 Benn Steil, the director of international economics at the Council on Foreign Relations, says that Trump’s trade deal will make US farmers $7 billion worse off than before the trade war started. In a tweet, he calls the first phase deal, as reported, will be a surrender agreement.

So is the U.S. now really “winning,” as Trump likes to say?

Let us focus first on what China actually has on the table: an offer to buy $20 billion in ag goods in return for Trump killing his planned October tariff increase, from 25% to 30%, on $250 billion in imports, as well as abandoning new 15% tariffs on a further $112 billion in imports scheduled for December. Is this a good deal?

The right way to evaluate China’s offer is to ask how much U.S. farmers would have exported to China in 2020 had Trump never started his trade war. In the graphic above, the dotted blue line projects such sales by assuming that, after 2017, China’s purchase volumes of each type of agricultural good would, absent Trump’s trade war, have continued growing at the rates seen since 2010. As the yellow marker highlights, China’s 2020 purchases would have exceeded $27 billion. That is, China would have bought over $7 billion more than what it is now offering. And this is a conservative estimate, given that the projections assume prices stay fixed at last year’s trade-war-depressed levels.

As regards China’s tease that a complete end to the trade war could push its U.S. ag purchases up to $40-50 billion, this is wholly implausible. As the dashed line above shows, Chinese ag imports before the trade war had barely been on pace to reach $30 billion by 2022.

In short, if Trump accepts what he is calling a “massive” deal with China, he will actually be leaving American farmers at least $7 billion worse off than they would have been without his policies. As for China’s hints of a far-off bonanza for U.S. farmers, these should be taken with a grain of soybean.

Of course,  Trump should simply open the borders to Chinese products and say “Let’s trade.”

He doesn’t do this because he holds a long-ago discredited trade policy, mercantilism, as his guide, which holds that trade is somehow a zero sum game. This is far, very far, from the truth.