Too Much Turkey? Try These SWANs

I was in a last-minute meeting with an associate the day before Thanksgiving. And naturally, our respective holiday plans came up in conversation after everything else was said, done, and scheduled.

Apparently, his family always makes an intense amount of turkey for the November festivities. So much so that they have leftovers for the next evening and the next and the next. It’s a four-day feast, where they indulge in the big bird from crispy skin right down to its bones.

After that, he laughingly told me, “I’m fine not having any more turkey ‘til the next year.”

I don’t know what your family Thanksgiving tradition is. Everyone does things a bit differently per their particular tastes – even down to what they call the various dishes they do or do not serve.

For instance, here’s a quick pop quiz. Do you call a certain carbohydrate-heavy, savory side dish:

According to multiple expert sources, there really is no difference between stuffing and dressing, at least.

For the record, yes, I know those are fighting words. But I’m counting on your being stuffed (or dressed?) to save me from having my head bitten off for it. 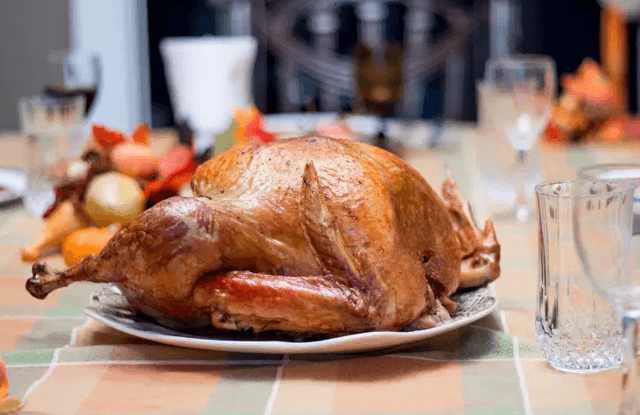 In case you still have every intent to tell me why I’m wrong here, let me point you to one of my expert sources. For example, The Pioneer Woman’s website reads:

“To settle the debate once and for all, we first looked to tradition. While there’s no evidence that the side was actually served at the original Thanksgiving dinner, History.com reports that the Pilgrim most likely made some sort of wild rice dish alongside their meal. As the years went on, New Englanders added ingredients like oysters and chestnuts to their stuffing recipes.

Meanwhile, Mennonite mothers in Pennsylvania added their own twist, using leftover mashed potatoes to create their own version called “filling.””

Apparently, stuffing was the term used across the board though up until the 1850s. That was “when Victorian nobles took offense at the vulgar word,” thus beginning the whole heated debate.

“In the most technical terms, stuffing is stuffed (literally) inside the cavity of the turkey and cooked there. Though stuffing has gone a little out of style due to the increased risk of food-borne illnesses, the added turkey juices do make the dish more delicious…”

“Dressing, on the other hand, is roasted in a separate vessel like a casserole dish… Though its ingredients can be identical to stuffing, chefs usually add flavor via mix-ins and seasonings instead of turkey juices…”

Sure, some people use cornbread as the base. Others use crusty baguettes, or challah or white bread. And apparently the Pacific Northwest uses sourdough bread and seafood.

You’ll also find that most people in the Northeast and Pacific Northwest call it stuffing, while the South and Midwest call it dressing. But overall? It’s the same concept.

Again, don’t blame me if you disagree. Blame the cooking experts.

Anybody Up for SWAN?

So, what brings Americans together despite these differences? I’ll go back to my associate’s comments about the turkey.

Lots of it. Until we’re ready to beg for almost anything else.

If you find yourself in that position today, I’ve got some sleep-well-at-night (or SWAN) stocks I’m happy to dish out instead.

They’re plump. And tender. And I truly can’t see you getting sick of them anytime soon.

That’s because these real estate investment trusts, or REITs, don’t just taste good going down. They continue adding the right kind of weight to your portfolio long after your first bite.

At the risk of destroying my ongoing Thanksgiving-themed metaphor, I want to break it down (carve it up?) for anyone unfamiliar with SWANs. They’re investments you can own for long stretches of time – if not throughout your entire lifetime – without having to regularly worry about their performance.

These companies know their individual markets. They’ve spent decades establishing their territories in those markets. And they’re loyal to their shareholders, jealously maintaining and growing the dividend payouts they offer.

Have you ever seen a swan on the attack when it or its offspring is threatened? If so, you know it’s hard to mess with them.

This doesn’t mean they can’t be damaged. Like I always stress, there are no perfect stocks. And a “black swan” event like the ongoing pandemic can change the game, even turning these big, beautiful birds into turkeys – and not the good kind.

(Click here for a deep dive into why “turkey” is considered an insult… complete with some REITs you don’t want to fly with.)

But overall? SWANs like the ones below are worth owning now and holding for at least a while. Just as long as you get them for a good price, that is.

I know many of you are sitting around hoping to burn off a few calories, while simultaneously selecting some of the best SWANs for your portfolio. And to make it easy for you, I’ve already done all of the heavy-lifting, so let me get right to it and provide you with 3 SWANs worth buying.

SWAN #1: Realty Income (O) scores a “90” on our iQ (quality) scoring model and the reason this REIT scores so high is because of the following:

Balance Sheet: Rated A- (S&P) and A3 (Moody’s) and only 1 of 8 U.S. REITs with at least two A3/A- ratings. Low leverage and strong coverage metrics with net debt to adjusted EBITDAre ratio of 5.3x and fixed charge coverage ratio remains strong at 5.2x.

Consistent Earnings: Positive earnings growth in 23 out of 24 years as a public company (1996) and consistent occupancy levels, never below 96%.

Dividend Performance: In September, O increased the dividend for the 108th time in the company’s history and one of only 3 REITs in the S&P 500 dividend aristocrat’s index for having increased their dividend every year, for the last 25 consecutive years.

Valuation: With such a high-quality rating, it’s hard not to want to own O, and currently shares are trading at $61.64 (Friday close), just a fraction below our Fair Value price of $61.75. This means that shares are soundly valued, and we recommend waiting for a 5% pullback (better margin of safety). The dividend yield is 4.5%, and at the current price point, we would expect shares to return around 10% annually. 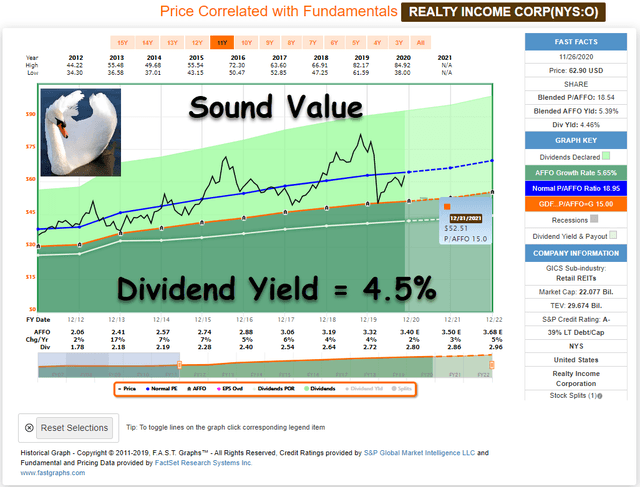 Our next SWAN on the list is Kilroy Realty (KRC), an office REIT that invests in office and mixed-use properties in submarkets along the West Coast, in markets such as Greater Los Angeles, San Diego County, the San Francisco Bay Area and Greater Seattle. Our iQ (quality) tracker scores a 90 for KRC based on these attributes:

Balance Sheet: BBB rating (S&P) with $1.4 billion of liquidity ($685 million of cash and $750 million under revolver) and around $250 million NOI cushion under the bank covenants. Strong debt metrics such as 5.6x Net Debt/LQA EBITDA and completed a $425 million public offering of 12-year unsecured green bonds with an annual interest rate of 2.5% (in August).

Diversification: ~55% of the tenants are considered “tech” companies that require “collaboration” and cannot “work from home”. Company culture is extremely critical to the success of these firms, where mentoring, career advancement, and onboarding play important roles. Life Science accounted for ~22% of all funding with $8.0 billion.

Dividend Performance: Announced dividend increase of 3.1% in August driven by strong NOI from development projects and 33.3% cumulative increase since Q1-16. Increased dividend every year since 2015.

Valuation: We recommended KRC to iREIT on Alpha members in mid-September and shares have since returned 22%. We maintain a Strong Buy, recognizing that FFO could grow by double digits in 2021 and 2022, fueled by Life Science investments. Shares are trading now at $63.65, around 8% below our Fair Value target and the dividend yield is 3.2% 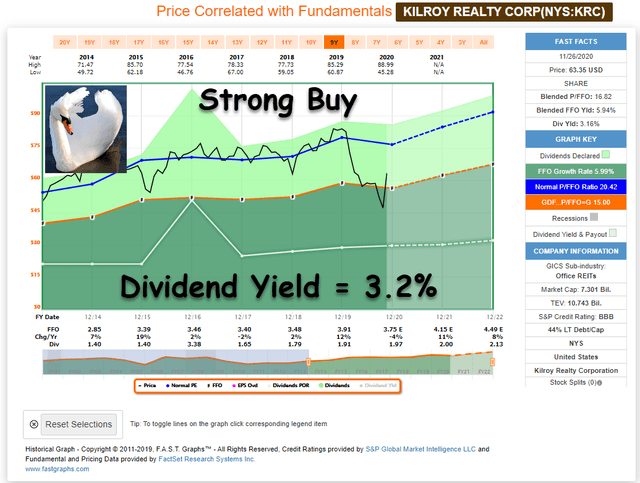 Our final SWAN, as ranked by iREIT’s iQ (quality) model is Healthcare Trust of America (HTA), a “pure play” medical office building (or MOB) REIT. Our iQ (quality) tracker scores a 90 for HTA based on these attributes:

Diversification: 467 properties (25.1 million square feet) in which HTA focuses on growth markets where it can achieve operational scale. 10 markets of ~1M SF and 17 markets >500k SF. HTA is the largest MOB-focused REIT.

Consistent Earnings: Delivering earnings growth to the bottom line, even during COVID. Around 2.7% average same store NOI growth since 2014.

Dividend Performance: Despite COVID, HTA had record earnings in Q3-20, and that gave the company the confidence to go ahead and raise the dividend for the seventh consecutive year in a row. While many of our peers were cutting their dividends or remaining flat, HTA had the confidence to continue to raise.

Valuation: We maintain a BUY with HTA based upon the 9% discount to our Fair Value target. Shares are trading at $26.69 with a dividend yield 4.8% and we believe shares could return 15% to 20% annually. 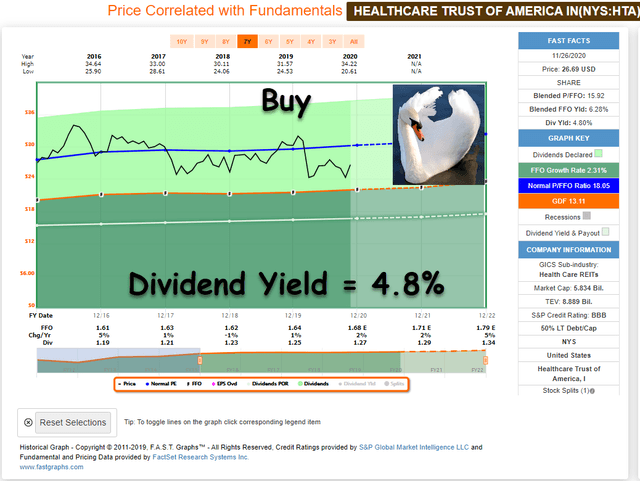 The Safest Dividend Is The One That’s Just Been Raised

As you ponder your Thanksgiving leftovers and which REITs to buy next, just remember that the “safest dividend is the one that’s just been raised”. The common thread for all 3 above-referenced SWANs are that they all raised their dividend amid a global recession.

And that helps me to sleep well at night!

This Only Happens Once A Year

At iREIT on Alpha, we’re committed to helping investors navigate the turbulent times. We carefully lay out framework for finding great REITs and show you how to know when they’re trading at a discount to intrinsic value. Our quality scoring tool helps identify the company’s economic moat and generate stellar portfolio returns. 20% Off and FREE REIT Book. 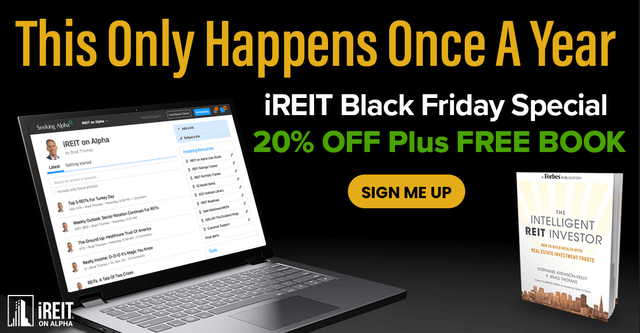 Disclosure: I am/we are long O, KRC, HTA. I wrote this article myself, and it expresses my own opinions. I am not receiving compensation for it (other than from Seeking Alpha). I have no business relationship with any company whose stock is mentioned in this article.