All that is required is the first step.

After two auctions, in the Treasury shortened week on Monday, the Treasury concluded the week’s abbreviated issuance schedule with the sale of another record auction. It had no difficulty finding buyers for $56 billion in 7 year paper. This was the most on record and double the average 7 year auction size since 2010. There was some quite welcome news, when looking at the internals, where indirects, foreign buyers, jumped from 60.1% to 65.4%, the highest since August, and well above the 63.7% recent average. 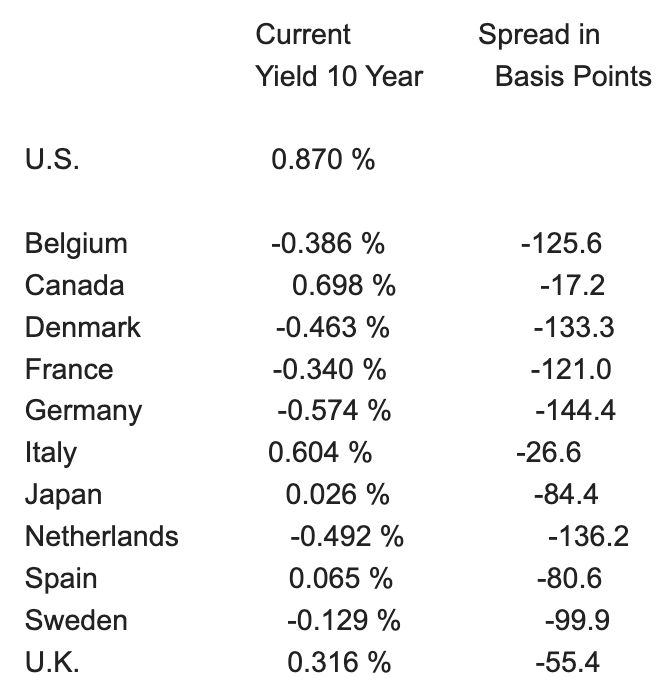 You step back. You look at these numbers, and wonder. The country with the largest economy, the biggest bond market and yet, we are paying higher yields than almost every other developed country. Is it them? Is it us? What is our central bank doing?

I do not believe this is a rhetorical question. I think this question will come front and center as the United States has a new government. As I have said before, I think the Fed is going to come under tremendous pressure to reduce interest rates even further, as our government borrows more money, and as the Treasury has to pick up the bill.

It used to be, of course, that no one believed that interest rates could go below Zero, where the lender was paying for the privilege of lending money. For thousands of years no one knew it was a privilege but now, well, the corner has been turned. Moreover, for a nation, to borrow at less than Zero, it is quite easy to take on the debt as it is without any real current cost, until you get to the maturity. Money in. Money out, and all for no cost in the meantime. What a wonderful world.

Those that are calling for higher yields have left out the single most important consideration in the bond markets, which is the Fed, and what they wish to do. A keystroke here, the “enter” button there, and their assets can grow by trillions. Then they take the results of their strokes at the keyboard and buy more bonds, and move the markets. All in the blink of a banker’s eye.

We now have a “Borrower’s Paradise” and a “Fixed-Income Investor’s Hell,” but I believe we are going to head even lower, into Dante’s Inferno. Down and down and down multi levels into territory never explored in America yet here we will find our brethren from the European Union, Switzerland, and Japan.

“Soon you will be where your own eyes will see the source and cause and give you their own answer to the mystery.”

If you go back to the beginning of the year, you will note that the Fed had about $4 trillion in assets. They are at $7.10 trillion currently and are dwarfed by the ECB who now has $8.00 trillion in assets. In fact, the total of the world’s major central banks now stand at $27.20 trillion which is larger than any economy on Earth. Forget the “bond vigilantes,” of the olden days. The “Masters of the Universe” are now the central banks and no one else can compete with them, as no one else can make the money.

Further, the European Central Bank has all but sworn, when they meet again in December, that they will be increasing their assets once again and, on the stated basis of fighting the pandemic, they will once again drive down their interest rates even lower, into negative territory. The governments rejoice. The investors grimace. It is quite clear who has the upper hand.

READ ALSO  Blue State Economies Will Soon Crumble – But Will They Take Red States With Them?

There are those who will ask, “When will it end?” The answer, is, “Not in our lifetimes.” A new trick has been learned, and they won’t be giving it up any day soon. “Money for nothing and checks for free” and let the buyers, and the banks, beware.

“Move along, nothing to see here,” they said. Maybe so, but lots to do, as we adjust to our new reality. The “Hunt for Red October” was a minor skirmish, as compared with the “Hunt for Yield,” these days. Closed-end funds represent the last of the sectors left, to find much of it. I am following my chosen path but even there, I fear, the pressure will be on as the outsized yields of yore dry up as both people and institutions take what they can get.

“It is necessity and not pleasure that compels us.”