TMX Group Ltd. (OTCPK:TMXXF) is the operator of the Toronto Stock Exchange. The company’s share price has increased by approximately 50% since reaching its March lows, as investors realized volatility actually is a good thing for the operators of stock exchanges. Although the recent run in its share price has reduced the dividend yield to approximately 2%, strong financial results will allow TMX to rapidly reduce debt and/or accelerate a share buyback program to complement the 2% yield.

The average daily volume of TMX on the OTC market is around 1,000 shares per day, which isn’t great. That’s why it would be recommended to trade in the shares through the facilities of the Toronto Stock Exchange (which also is the best way to support the business) where it’s trading with X as its ticker symbol. With an average daily volume exceeding 220,000 shares, liquidity in Canada is clearly much better. And as TMX is a Canadian company reporting its financial results in Canadian dollars, I will be using CAD as the base currency throughout this article. And where applicable, I will be pointing to the Canadian listing to determine the per-share metrics. 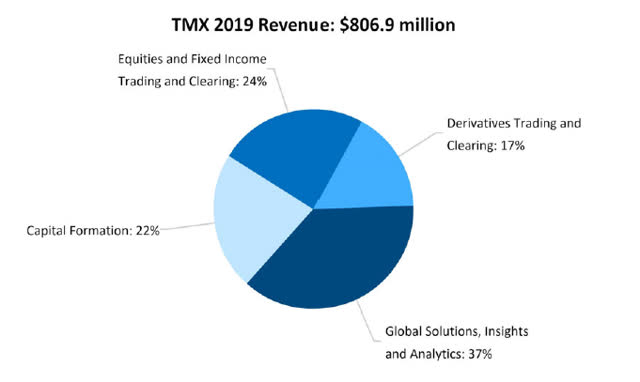 2019 was a good year for TMX as the combined market capitalization of all companies listed on its exchanges increased from C$2.65T to C$3.25T.

The caveat for TMX Group is that it is operating very resource-focused exchanges. A large part of the companies on the TSX and the majority of the companies on the Venture Exchange are mining and oil and gas companies. This means that the financial performance of TMX as the exchange operator will also depend on the well-being of these sectors. If the resource sector is in demand, trading volumes will be higher while the exchange will also make extra money on fees and capital raises. Additionally, the sustaining listing fees are directly correlated to the market capitalizations of the listed companies, so TMX will make more money when resource companies are in high demand and less money when the sector is flat-lining.

Whether markets go up or down, the exchange operator will make money anyway. 2019 was another strong year

2019 was an interesting year for TMX as although the revenue decreased by almost 2%, income from operations increased due to lower expenses. In FY 2019, TMX generated revenue of C$807M, but operating expenses decreased by approximately 6% to C$425M. 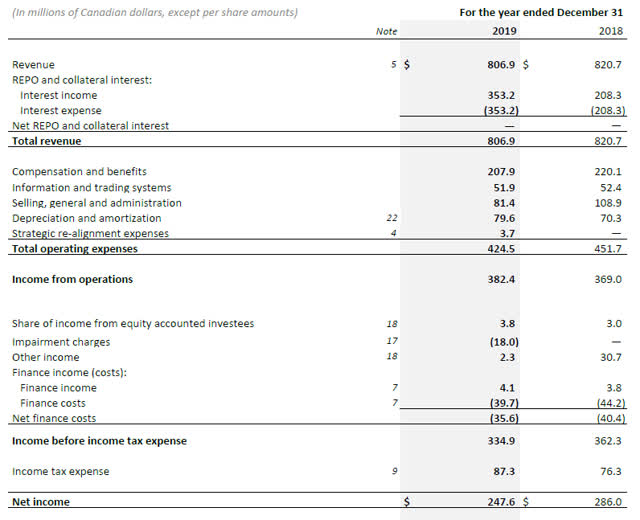 We notice a very strong reduction in SG&A expenses while other expenses remained relatively unchanged. The strong opex reduction has helped TMX to record a 4% increase in income from operations, which came in at C$382M.

Unfortunately, this wasn’t sufficient for the company to report a positive net income. Pre-tax income decreased, predominantly due to a C$18M impairment charge while TMX also recorded a non-recurring C$30.7M income in FY 2018 related to the sale of a division which created a capital gain. On top of that, the average tax rate increased as TMX had to pay more taxes despite generating a lower pre-tax income.

Investors need to look through the weak 2019 performance, as on an adjusted basis (excluding the “other income” which boosted the 2018 pre-tax income and the impairment charge which reduced the FY 2019 pre-tax income), EBT in 2019 would have come in at almost C$351M compared to just over C$331M in FY 2018. So although the bottom line shows a weaker result, this was entirely due to non-recurring issues.

The interesting element of exchange operators is the asset-light and capex-light model allowing for a high free cash flow conversion rate.

We still need to add the incoming interest and dividend income (C$4.1M and C$2.8M respectively) while deducting the C$38.4M in interest payments and C$8.2M in lease payments. Total operating cash flow in FY 2019 was C$345M. Subsequently, we need to deduct the C$58M in capex to end up at a free cash flow performance of C$287M. That’s indeed higher than the net income thanks to the non-cash impairment charge and the difference between depreciation and amortization expenses compared to capital expenditures in the year.

Volatility is TMX’s friend: Q1 was strong, Q2 could be even stronger

What makes the stock exchange operators even more interesting is their relative resilience during volatile times on the markets. Even when markets are tanking, exchanges will continue to make money and, in some cases, will perform better than in normalized times as the increased nervousness on the markets results in more transactions and higher fees for the exchange.

Although the impact of the COVID-19 virus only became apparent in March (indicating 2/3rd of the quarter was “business as usual” for TMX), the company’s quarterly results showed a substantial improvement compared to Q1 2019. 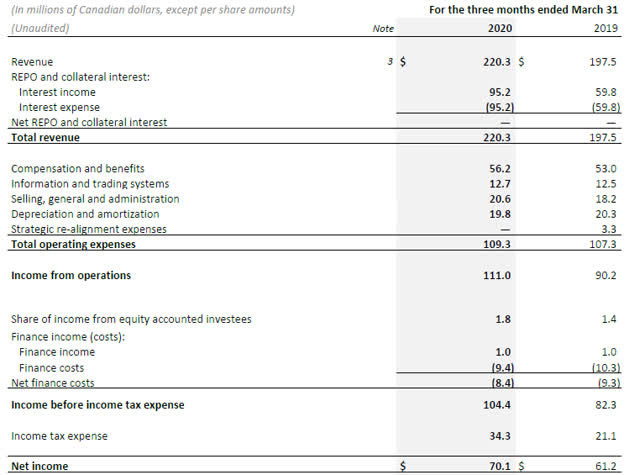 As you can see above, revenue increased by more than 10% to C$220M, and although operating expenses also increased by approximately 2%, pre-tax income increased in excess of 25% to C$104M. The average tax pressure came in at almost 33% (compared to just over 25% in Q1 2019), but despite the higher tax pressure, Q1 net income was approximately C$70M or C$1.25 per share.

As expected, the free cash flow result was even stronger than the net income. As you can see below, TMX reported a C$79M operating cash flow, but this includes a C$76M investment in working capital and also a contribution of C$54M from deferred revenue (which usually gets straightened out over the year). Additionally, tax payments came in C$6M below what was due over the Q1 results, while we also need to add the C$6.4M in interest and dividend income back to the result while deducting the C$4.3M in interest and lease payments. 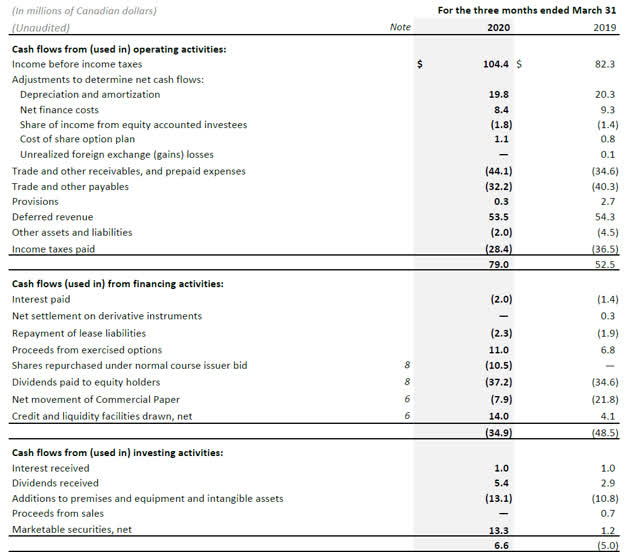 To be correct, we should perhaps deduct an additional C$4M in interest expenses as some of TMX’s debt only requires interest payments to be made every six months, which means some quarters will be heavier than others.

On an adjusted basis, operating cash flow in the first quarter of the year was approximately C$94M. With a total capex of just C$13M, free cash flow in Q1 came in at C$81M. And just like FY 2019, the free cash flow result is higher than the net income. The main reason is once again the difference between the C$20M in depreciation expenses and the C$13M in capex in Q1.

This also confirms that while most businesses were hurting in the first quarter of the year, TMX was thriving on the back of higher volatility levels on the financial markets. As April and the first half of May remained volatile, there’s no reason to assume Q2 will be substantially worse than in the first quarter.

TMX Group has a good track record of increasing dividends and the dividends paid out in 2019 were once again higher than in the preceding years. As of right now, TMX is paying a quarterly dividend of C$0.66/share for an annualized dividend of C$2.64/share. This means that barring unforeseen circumstances, we should see the company once again increase its dividend.

The dividend is obviously fully sustainable as it is currently costing the company just C$37M per quarter. Considering TMX generated C$81M in free cash flow in Q1, the payout ratio based on Q1 performance is just 45%.

This means TMX has plenty of cash to continue buying back stock with the “excess” cash flow. I expect the Q2 free cash flow to be even stronger resulting in an even lower payout ratio, but the volatility will probably go down again in the second semester, which will result in a slightly higher payout ratio closer to 50%.

While TMX isn’t extremely expensive at the current free cash flow yield of approximately 4.5%, the exchange operator was dirt cheap during the March crisis when the free cash flow yield exceeded 6%. I doubt we will see the March lows again, but there are still enough reasons to like TMX on a pullback. Thanks to the volatility, potential investors also have the possibility to write a put option in an attempt to get their hands on lower-priced stock. A P125 expiring in October could yield a premium of approximately C$4, resulting in an average buying price of C$121 for a yield of close to 2.2%.

I will be interested in seeing how much stock TMX has repurchased during Q2 as that still provided an excellent opportunity to quickly reduce the share count to increase the per-share metrics while also reducing the dilutive effect of employee options that will be exercised in the next few quarters and years.

While a 2% dividend yield isn’t extremely appealing, it is a safe yield in a company whose performance should be boosted during times of market uncertainty. That in combination with a strong history of dividend increases and the current share buyback should allow TMX to continue to hike its dividend in the foreseeable future.