TJX Cos. Is On Sale (NYSE:TJX) 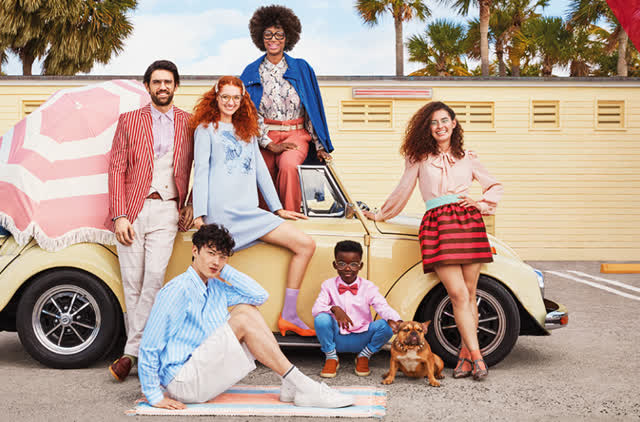 The COVID-19 crisis has created countless opportunities in the financial markets. One such opportunity, in my view, is retail all-star TJX Companies (TJX). TJX had a hand in essentially creating mass market acceptance of the treasure hunt retail experience, wherein consumers walk into a store not necessarily knowing what kind of merchandise is inside. This model is far from unique to TJX, but I’d argue TJX has executed it better than any other. This best-in-class position has afforded TJX some enormous earnings multiples over the years, but even after a massive rebound rally, I think TJX offers relative value today and is worth a look from the long side.

A swift rebound is in the offing

One thing TJX has done extremely well in the past decade or so is boost its revenue. This has been done to some extent via expanding the store base, but primarily, TJX has been a comparable sales story.

Below, we have revenue in millions of dollars, as well as year-over-year change for the past two years, as well as estimates for this year and next year. 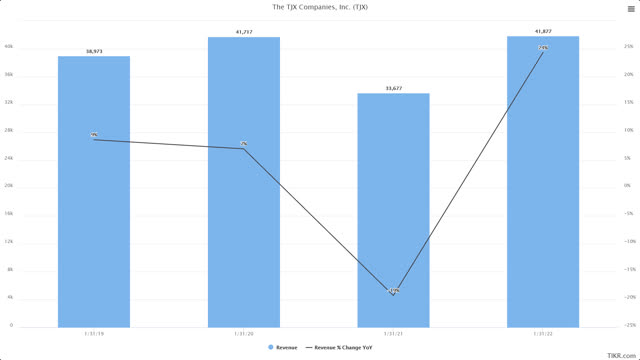 TJX has managed to grow its top line at very impressive rates, examples of which can be seen in fiscal 2019 and 2020, respectively, in the above. Revenue growth neared 10% for both years despite ~$40 billion in annual revenue, which is astounding growth for a company of this size.

Obviously, this year is going to be ugly as the company’s stores were shut for several weeks earlier this year, but analysts expect a strong rebound into next year. Considering how TJX bounced back from the Great Recession and thrived in an environment where many others didn’t, I have no doubt TJX will bounce back from this setback as well.

Below, we can take a closer look at comparable sales growth, expressed as a percentage change from the prior year.

Estimates for this year are for -14% comparable sales growth, but to be honest, nobody knows what this year will look like. A print of -14% seems reasonable enough, but there’s a pretty wide range of reasonable values for this year given how early in the recovery process we are.

Next year is what I’m interested in, and comparable sales are expected to soar 22% according to current estimates. If we index same-store sales to fiscal 2020 actuals, a 14% decline this year and a 22% rebound next year would equate to ~105% of fiscal 2020 revenue, meaning next year’s increase should get TJX back to its fiscal 2020 levels, and then some.

These are lofty expectations to be sure, but as I mentioned, TJX is a best-in-class retailer, a reputation it has earned over years of outperformance. The value proposition the company offers to consumers is quite strong, and the treasure hunt experience is a proven winner. Whether TJX hits 22% comparable sales growth next year or not isn’t really the point; the point is that TJX has a very high likelihood of a robust rebound into next year and a return to normalcy.

A similar, if slightly less bullish, story is unfolding in margins, as we can see below. We have earnings before taxes, or EBT, which is one of many ways to measure operating income, and is plotted in millions of dollars. 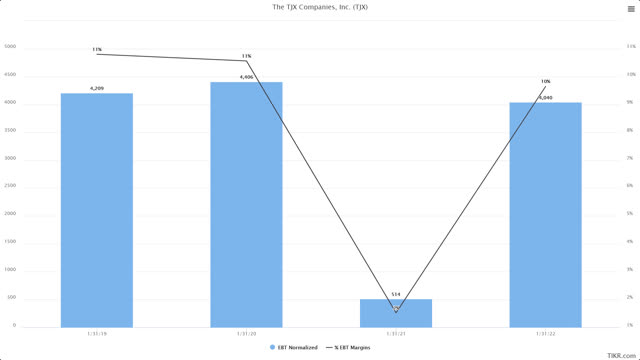 EBT has been in the $4.3 billion area for the past two years, but will shrink to just ~$500 million this year on plummeting sales. The rebound in sales should provide a much-needed boost to profitability, but not back to former levels. Indeed, EBT margin was nearly 11% of revenue in the past two years, but is expected to be less than 10% next year, even after revenue rebounds.

This is my one source of concern on TJX, and indeed has been for some time; margins appear to have plateaued, and with few catalysts for that to change, expectations must be tempered appropriately. There is no reason TJX cannot get back to 10%+ EBT margins, but one has to think that post-crisis measures like additional store cleaning procedures, potentially limited store hours, additional staff, etc. could cause costs to increase, which would crimp margins. It’s too early to tell where the new ceiling is on margins, but this is the risk in TJX to my eye.

Capital returns should bounce back

TJX recently suspended its dividend, a move which I found a bit puzzling. TJX has a 20+ year dividend increase streak, a claim not many companies can make, and to throw that away because of one or two weak quarters seems odd. In particular, because TJX can afford to continue to pay its dividend even with reduced earnings, so I don’t get it.

At any rate, the suspension has been enacted, but TJX is well-positioned to continue capital returns quite quickly, as we can see below.

We have cash from operations, capex, and free cash flow, all in millions of dollars, for the past two years, and estimates for this year and next year.

FCF was nearly $3 billion in each of the past two years, and thanks to some timely capex cuts, should still be nearly half that amount this year. Next year has TJX resuming normal capex levels and hitting $2.5 billion in FCF.

At just over a billion dollars annually, TJX could have afforded to continue to pay the dividend. With that being the case, it stands to reason that the company could reinstate the payout at any time, and with that being a key, attractive trait of the stock (before the dividend was suspended), it should be once more in due time.

As I mentioned, I’m disappointed that TJX made the decision to suspend the dividend. But at the same time, it has the ability to reinstate the payout immediately (more or less), whereas many companies in this environment are just fighting to survive. TJX is a class leader in this sense as well.

The stock has rebounded hard from its lows, but I still see value in it today.

Shares trade for 21 times next year’s earnings, which isn’t necessarily cheap on an absolute basis, but it is relatively cheap for TJX based on recent history, as well as against its robust growth outlook. Normalized EPS growth, which should begin in calendar 2022, is slated for double-digit gains for the foreseeable future. For a company with that sort of growth, and TJX’s track record, ~18 times earnings is a bargain.

I realize this multiple is on earnings that are two years away, but TJX’s historical record is top-tier, and I think there is a lot of cause for optimism in terms of a recovery coming quickly. TJX thrived in the post-Great Recession environment when value proposition became even more important for consumers, and with job losses in the US in the tens of millions in recent months, value proposition will be even more important.

Those that can deliver on that value proposition – like TJX – will likely thrive while others suffer. TJX has rallied a bunch already, but shares look like a long-term buy to me.