Welcome to the bizarro world where an army of retail traders on Robinhood are bidding up valuation of questionable outfits, from pie-in-sky productless dreams to bankrupt companies; where former sport-betters get bored (because there are no sports to bet on), try their hands on stocks, and manage to earn short-term returns that humiliate legends such as Warren Buffett; where up is up, down is also up, and any news is bullish news, COVID or riots be damned.

When the price of money is driven to zero globally by our trusty Jerome Powell and other central bankers, not only is the world awash with capital, but discount rates in any kind of financial model that involves estimating future cash flow and ascertaining how much a business is really worth is also driven close to zero. For the uninitiated – low discount rates mean every piece of risky asset and its derivative cousin are bid up to frothy valuations. For now, the market has replaced its central function of price discovery with a proclivity for speculation and outright gambling.

All this makes now a tough time to be a value investor. Value as a strategy under-performed growth by the greatest margin in decades – basically since the dot-com era. I’m old enough to remember how that ended, but countless new retail investors armed with a few thousand dollars each of federal handout have yet to learn a very valuable lesson.

Although it’s true that the latest economic numbers have improved somewhat, the improvement came from a very low base of a locked down economy. It’s hard not to improve from zero activity. Take employment for example, while the headline numbers seemed very positive with millions of jobs gained, we are still digging ourselves from a very deep hole. Some of the jobs lost may never come back. 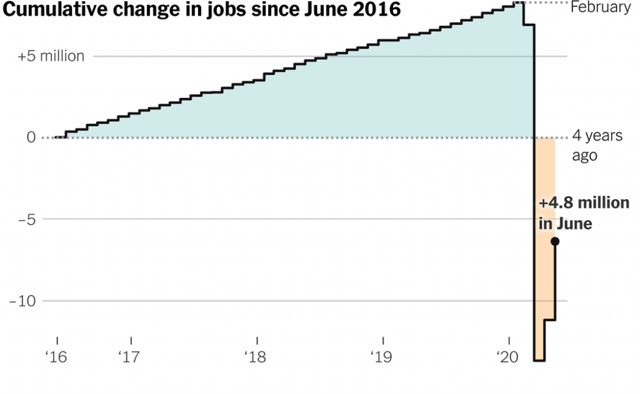 How this kind of “recovery,” where we improved from close-to-zero economic activity to greatly-depressed economic activity, justifies all-time-high valuation is beyond most observers from the value discipline. But I won’t bore readers with too many more graphs and data tables on the macro situation, lest we rehash what everybody has already written about.

Time will tell if massive central bank liquidity and retail speculative furor is enough to offset the COVID-related destruction to the demand-side economy, and the secular de-globalization coming from a renewed US-China animosity and an everyone-for-themselves mentality in the rest of the world.

As a value investor with a business-owner mindset, the prudent move during this period where there is a dearth of undervalued assets is to stay relatively cautious.

Review of Our Portfolio Businesses and Results

As recent as our last update at year-end 2019, we were still more than fully invested with a bit of margin leverage. But as we all know, something like 6 decades has passed by in the last 6 months. During the period, we made significant changes to the portfolio – raised cash by disposing of businesses that are expected to perform poorly, and doubled down on a couple of our bedrock businesses.

As disclosed on my StockTalks, we made several trades on Royal Caribbean Cruises (RCL) over the last several months that resulted in its complete disposition. I’ve written a separate article about Royal Caribbean, and its prospect hasn’t changed much since that article. Cruise restart date keeps getting pushed back, and its primary market – the United States – is struggling to get its epidemic under control, to stay the least. I continue to hold the view that Royal Caribbean is a damaged business with or without the cash to survive through the current crisis. Since My Little Conglomerate’s last update, the Royal Caribbean stock fell from $133.51 to $50.30, a decline of 62%, the biggest contributor to My Little Conglomerate’s underperformance.

READ ALSO  Get Ready For Services Prices To Accelerate Higher

We also had to sell out of another of our previous favorites CAI International (CAI), albeit at a hefty profit. For anyone who wants to follow, all trades done by My Little Conglomerate are disclosed at my StockTalks. CAI is primarily a container business that was earning very exceptional return-on-equity during our ownership. However, globalization has entered into a secular decline even before COVID-19 hit. Year-to-date, CAI fell 43% from 28.98 to 16.66. CAI went through a “strategic review” which has since been concluded. They are exiting both the rail and logistics businesses to focus only on containers.

Finally, another position we disposed of was VanEck Vectors India Growth Leaders ETF (GLIN) – previously known as their India Small-Cap Index ETF (SCIF) before the ticker and strategy change this year. India is also struggling to contain its disease spread despite prolonged harsh lock-down. The ETF fell 27% this year. We may re-enter the India market if valuation improves further.

On the flip side, we have increased our position on Gilead Sciences, Inc. (GILD). Everything I wrote about the COVID-19 disease back in March came true – the difficulty of containing it, innovation as being the only way out, and the potential of Gilead’s Remdesivir as a treatment. Today, case counts in the US and developing countries are still increasing, and we’re starting to see resurgence of the disease in certain places in Europe and Asia that previously had it under control. Remdesivir remains the only drug widely approved for COVID-19, and it’s looking more and more like a recurring treatment for an endemic disease rather than a one-time deal. And yet, it is only the cherry on top of a solid business that is fundamentally sound even without COVID-19.

Another business that we entered into was Nutrien Ltd. (NTR). I wrote an in-depth analysis on Nutrien earlier in the year before the pandemic really got going. The main thesis was the fertilizer company has completed its heavy investment cycle, so reported earnings (which include high depreciation costs from previous CapEx) greatly understate future cash flow. That thesis remains unchanged as the farming business should be one of the more COVID-resistant businesses – unless the human species start dying en masse, Nutrien is a good one to buy into at low valuation.

My Little Conglomerate ended its steady climb since inception with a decrease in Owner Earnings that came from the aforementioned dispositions of businesses and increased cash level.

However, Owner Cash Flow increased significantly as our current subsidiaries are structured as cash cow with high dividend payout.

In the long run, we look to opportunistically redeploy cash to generate high compounded returns – and to that end, we continue to be on the look-out for great businesses selling at reasonable prices. But until such time as we find them, patience is the name of the game.

Disclosure: I am/we are long NTR, GILD. I wrote this article myself, and it expresses my own opinions. I am not receiving compensation for it (other than from Seeking Alpha). I have no business relationship with any company whose stock is mentioned in this article.