Tikhanovskaya calls on EU leaders to back ‘awakening’ of Belarus

Opposition leader Svetlana Tikhanovskaya has appealed to EU leaders to “support the awakening” of her country as they prepare to meet for an emergency online summit on the Belarus crisis on Wednesday.

In a video appearance, Ms Tikhanovskaya, the main rival to authoritarian president Alexander Lukashenko in this month’s elections, pleaded with the EU to reject “fraudulent” poll results and swing behind efforts for a peaceful transition of power.

Belarus has been in turmoil since Mr Lukashenko claimed a landslide victory to extend his 26-year rule of the former Soviet republic, which borders three EU countries. Demonstrators have taken to the streets in their hundreds of thousands to demand his resignation, despite a brutal police crackdown.

“Mr Lukashenko has lost all the legitimacy in the eyes of our nation and the world,” Ms Tikhanovskaya said in the video posted on YouTube.

Ms Tikhanovskaya, who fled to EU member state Lithuania after the election, said she had launched a “national coordination council” to “lead the process of a peaceful transition of power, via dialogue”. It would immediately call for “new, fair and democratic” presidential elections under international supervision, she added.

She said Belarusians had been “brutally beaten, imprisoned and tortured by the regime desperately clinging on to power”, after they rallied in cities across the country to “defend their vote”.

“This is taking place right now, in the middle of Europe,” she said. “I call [for] respect [for] the sovereignty of Belarus and the choice of the Belarusian people.” 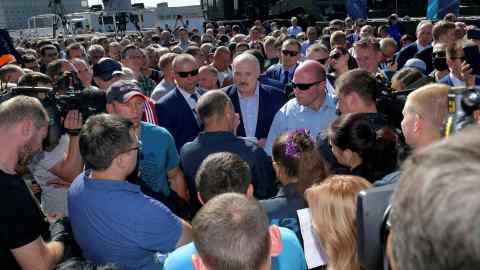 Ms Tikhanovskaya’s appeal came amid further signs of defiance from Mr Lukashenko, who told workers at a state-run automotive plant earlier this week that there would be no fresh elections unless he was killed.

On Tuesday, he used a meeting of Belarus’s state security council to claim that a new council set up by the opposition was an “attempt to seize power, with all the ensuing consequences.”

“I want to warn those who joined this council that we will take adequate measures,” Mr Lukashenko said, according to the state-run Belta news agency. “But only according to the constitution and the law. We have enough of these measures to cool some hotheads.”

He also accused the opposition of wanting to weaken ties with Russia, and said that he had deployed combat units on Belarus’s western border.

“Today, not only inside, but also outside [the country], we have problems,” he said. “And the fact that these are absolutely co-ordinated actions, we already see openly.”

Mr Lukashenko also moved to try and shore up his support in Belarus’s police, which has seen some defections over the past week, issuing medals for “exemplary service” to 300 police officers barely a week after a brutal crackdown on protesters that left hundreds injured.