This weekly post assumes that ETFs are the reader’s primary investment tool.

Investment thesis: Investors should be invested right now as the markets are in a bullish posture. This week, all the indexes and most sector ETFs consolidated gains.

Prices moved higher from late September to early October. Since then, they’ve been consolidating in a downward sloping pennant pattern. 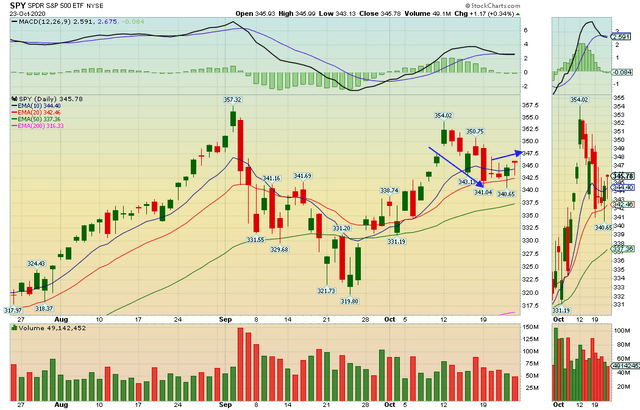 The three-month chart shows there are actually two mini-trends in the pennant formation. The first is a standard, downward sloping counter-rally; the second (which lasted from Tuesday through Friday) is more of a sideways pattern. Notice the declining volume during the consolidation. 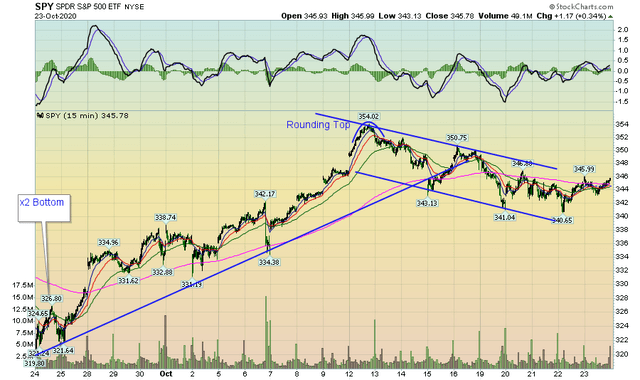 The 30-day chart shows the two trends referenced above. The first is a rally that started with a double-bottom in late September and ended with a rounding top. Since then, prices have been trending lower in a disciplined manner.

The QQQ has a similar pattern: 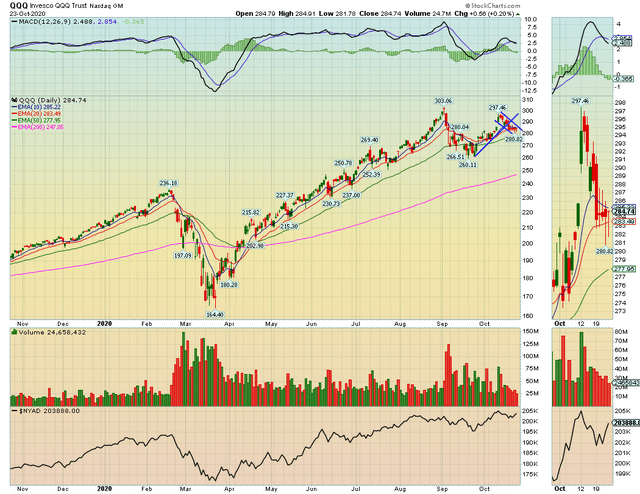 There are two trends in the latest counter-rally. The first is a standard move lower. The second is a sideways pattern with four very small-bodied candles. Notice the declining volume during the consolidation. 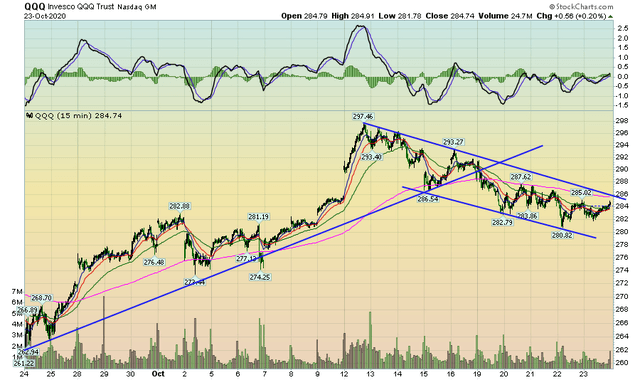 The 30-day chart clearly shows the rally and pennant consolidation.

Last week, the QQQ traded in a pretty narrow price range. From Tuesday through Friday, the ETF traded between 280.8 and 287.62. With that range, the ETF formed two triangle patterns. 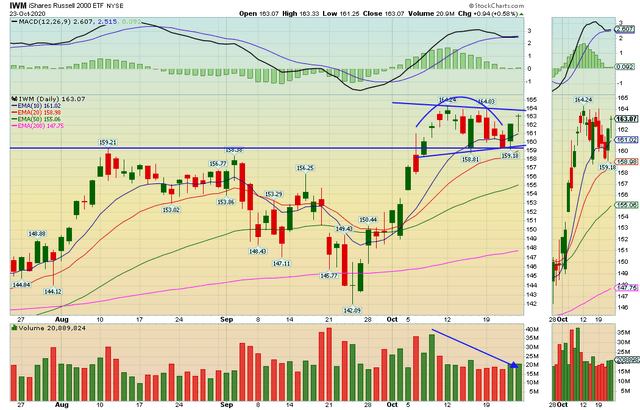 Prices broke through resistance at the 159.21 level in early October and have consolidated sideways since. There are two patterns – a rounding top and a longer pennant. Notice the declining volume.

To conclude the first section on the major indexes: last week was all about consolidation. All three major index ETFs have printed standard consolidation patterns all of which had declining volume.

Let’s turn to the 11 major sector ETFs, starting with the performance tables over 5 time frames:

There is a distinct difference between the week/month columns and the 3/6/12 months columns. In the former, utilities and financials are the primary constituents. In the latter, it’s technology and consumer discretionary. That means that during the last month, there’s been a change in industry leadership.

Real estate continues to perform terribly, appearing in all five time frames. Energy is in four.

Next, let’s look at the RRG graph: 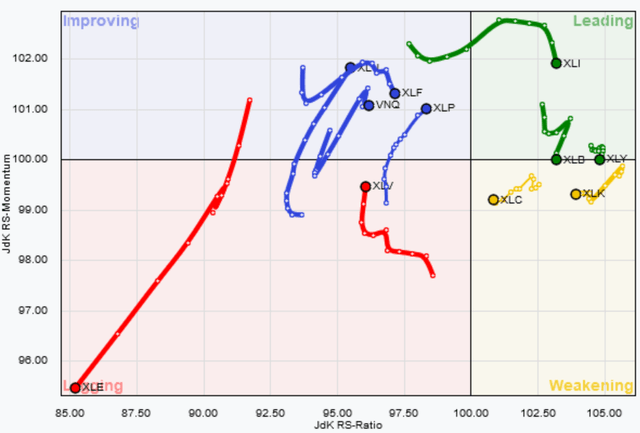 Let’s start in the NE leading quadrant where there is only one strongly-positioned ETF: industrials. Basic materials and consumer discretionary are on the cusp of transitioning to the “weakening” sector. Technology and communications services are beginning to move through the weakening sector. Defensive sectors are moving up in importance. Consumer staples and utilities are firmly in the improving sector; health care is moving into that group. All three defensive sectors are attractive right now and are on the buy list.

Consolidation is also the theme among the major sector ETFs as seen in the following 2-month charts:

All of the charts show some type of consolidation. A few have broken out a bit. But not enough to argue that an all-around breakout is in the works.

To conclude: Investors should be invested. The three main defensive sectors of utilities, consumer staples, and health care are also attractive.

Disclosure: I am/we are long XLP, XLU, XLV. I wrote this article myself, and it expresses my own opinions. I am not receiving compensation for it (other than from Seeking Alpha). I have no business relationship with any company whose stock is mentioned in this article.