‘This is the first time Belarusians believe we can change something’

In his 26 years as ruler of Belarus, Alexander Lukashenko has ruthlessly clamped down on dissent. Ahead of Sunday’s presidential election, two of his main political rivals have been detained, while a third is in exile.

But, despite the crackdown, the 65-year-old strongman faces an unexpectedly serious challenge from Svetlana Tikhanovskaya, a former teacher and wife of one of the imprisoned opposition leaders. The political newcomer has become the figurehead for a groundswell of public anger that has drawn tens of thousands of supporters on to the streets of the normally tightly controlled former Soviet state.

“Every election we have some sort of protests, but this is the first time Belarusians believe — really believe — we can change something,” said Olga Karatch, an activist from Vitebsk.

Since winning competitive elections in 1994, Mr Lukashenko has built an authoritarian state, removing term limits in 2004, consolidating control over the state’s levers of power and systematically sidelining and intimidating opponents.

At the same time, the former collective farm boss has maintained a tightly controlled economy dominated by huge state-owned companies making everything from fridges to tractors, a system he claims has helped Belarus avoid the economic crises that have hit other former Soviet states, such as Ukraine.

However, cracks have begun to emerge in his model in recent years. Wages, which rose steadily during Mr Lukashenko’s early years in power, have stagnated. And its Russia-reliant economy has weakened as Moscow has cut support in an attempt to pressure Belarus into deeper co-operation.

Yet it was the Lukashenko regime’s unusual response to the coronavirus pandemic, which has infected more than 68,000 Belarusians, that had fuelled the surge in discontent. Neighbouring Poland, with four times the population, has had 49,000 cases.

READ ALSO  Can you put a number on it? How to understand the world

Rather than impose any form of social distancing, Mr Lukashenko — who admitted last week that he had contracted the virus — has said cases should be tackled as they arise, and has dismissed fears of the pandemic as a “psychosis”, suggesting vodka and trips to the sauna as suitable antidotes. 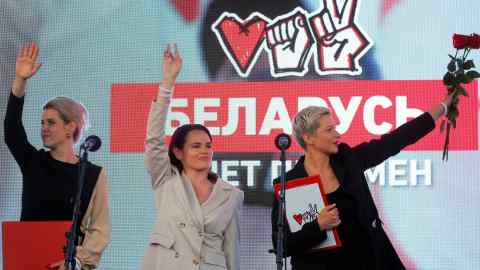 “There was already significant dissatisfaction with Lukashenko before the pandemic: the economic crisis was already there. But the situation with Covid-19 was the catalyst,” said Maryia Rohava, an Oslo university researcher.

“It was not just how their health response to Covid-19 was structured in terms of the limited public information. It was also the failed economic response to this challenge.”

As support for Ms Tikhanovskaya has surged, Mr Lukashenko’s regime has stepped up the pressure on opponents. More than 1,300 people have been detained for participating in peaceful protests, according to human rights groups. On Thursday, the head of Ms Tikhanovskaya’s campaign was also briefly held.

Belarus has not invited foreign observers and the Organisation for Security and Co-operation in Europe to monitor the election, citing health risks from the pandemic. Activists claim the lack of transparency could enable authorities to pressure public workers to cast their ballots in early voting, which began on Tuesday, and falsify the results.

One independent election monitor complained police had prevented observers from entering polling stations during early voting and detained several dozen after they went inside. Others counted more than 2,500 violations during the first two days of voting.

Meanwhile, Mr Lukashenko has cited an array of threats from abroad, claiming that 33 alleged Russian mercenaries detained in the country last week were part of a plot to destabilise Belarus and accusing unnamed foreign “puppet masters” of supporting his opponents.

“We don’t know what they are capable of. We don’t even know who they are. We don’t know if it’s the Americans and Nato, or someone from Ukraine pushing us, or if it’s our brothers to the east who love us so much,” he told security chiefs on Thursday. “There is a hybrid war going on against Belarus and we should expect dirty tricks from all sides.”

Ms Tikhanovskaya, who was allowed to run, despite her husband’s detention, has also been unable to hold rallies in the final week of campaigning after authorities hastily organised pop concerts in the same venues.

In an interview with the Financial Times last week, Ms Tikhanovskaya said she would encourage her supporters to contest the results at their local polling stations if she believed officials had falsified them, but insisted they would remain peaceful. 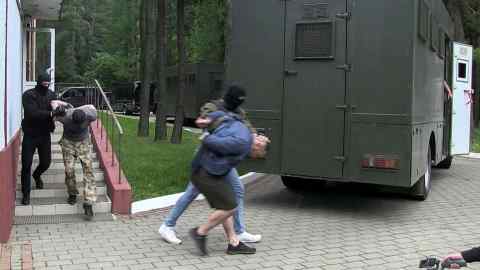 “We are not making any appeals to solve this through force. We want votes to be protected through legal methods,” she said.

Given the determination of Mr Lukashenko’s crackdown, analysts say that even the unprecedented surge in support for his opponent may not be enough to oust him, and expect the president will declare victory on Sunday.

“Tikhanovskaya has evolved. She is less afraid of the crowd, she is getting braver, she is improving with her speeches. But will it be enough to change the regime? I don’t think so,” said Tatsiana Kulakevich, an eastern Europe politics expert from the University of South Florida.

Of the street protests, Ms Kulakevich said: “For them to be effective they would have to be on such a massive scale and for such a long time that they would make staying on more costly for Lukashenko than stepping down.”

Nonetheless, Mr Lukashenko’s opponents remain determined. “I don’t want to say that people are not afraid at all,” said Ms Karatch. “But they understand that if Lukashenko is able to stay in power, the situation will be worse.”