This Is One Dangerous Rally

I’ve been in this business a long time. A “really” long time. As a friend of mine, our Vice Chairman at Schwab at the time, once said, “I’m so old I remember when Chuck Schwab wore glasses and had gray hair.”

In the intervening years Chuck has reverted to that distinguished gray and done wonders for individual investors. In the first three weeks of March, a lot of investors turned prematurely gray and were willing to become monks in Nepal rather than investors.

First, let us get our numbers straight. Someone told me the market declined 35% but already was up 25% so it’s now really only down 9%, barely enough to call it a correction.

I know that most SA readers are experienced enough to know this is not quite accurate. I told this gentlemen what you would expect: “If you have $100 invested in something and it declines 34%, how many ‘dollars’ does that leave you with?”

He eyed me skeptically and said, “You Wall Street guys can twist anything around.”

For the record, I’m not a Wall Street guy. I run my business from the shores of Lake Tahoe in the no income tax, more ranchers than gamblers corner of Nevada, a state where our legislature meets only every other year. The skeleton in my closet demands I tell you I once did work on Wall Street but got out of there as soon as I could.

My biggest concern about this rally: It has little support beyond what was being supported before the decline. Let me explain.

Leadership before the decline rested with the FANGMAN stocks. Leadership in this rally out of the decline has been the same. Investors did not take the time or give the attention to those fine companies that might have gotten ahead of themselves in price prior to the decline and now provide the opportunity to diversify away from FANGMAN with perhaps a greater capital gain potential. Nope, many are sticking with what worked before, ever and always.

That may yet prove to be a brilliant move, but there are those of us who see the rush back to FANGMAN as reminiscent of the Nifty Fifty of the 70s. This was a period in which the leadership got narrower and narrower until institutions and individuals alike were pretty much buying the same thing – only the 50 anointed companies seen as being the biggest and the best.

That did not end well. When the armor cracked, as it always will in one place or another, the rush to exit was brutal.

If these firms were overpriced and due for a correction before the 23-day bear market, they are fast approaching that territory again. If it ain’t tech, biotech or stay-at-home plays, it isn’t being bought. That kind of narrow breadth is not healthy.

Speaking of the stay-at-home plays, let me ask you this. Will Domino’s Pizza (NYSE:DPZ), GrubHub (NYSE:GRUB), et al, do as well in terms of revenues and earnings after we begin to slowly move about again, return to work and, dare to dream, eat at a restaurant or stop in at our favorite Cheers! pub? I think not. I’m one of those throwback value investors who tries to look not for the “current” hot play (“Buy Domino’s. They can’t miss!”) but where we might be in six months or a year or two, when I might be selling what I buy today. A lot of people are going to pile into the secondary and tertiary companies at prices only elevated because of a short-term potential boost to earnings.

Fine mid-cap and small-cap companies have been ignored even more than other companies. To be a successful rally we need to see interest along the entire continuum of small to mid to big to Titans of the Universe.

In my mind, in summary: Leadership in this rally stinks. Valuations are approaching levels in some cases where they triggered the decline. And while the market does predict the economy six months to a year or more out, in this case it seems to me the market is predicting a far better outcome in that time frame than I think is realistic

So economic exuberance, narrow leadership, narrower breadth (no followers of the leaders) and valuations approaching old highs. What could possibly go wrong?

All this is aided and abetted by Wall Street, of course. About 90% of the sell-side analysis I have seen notes that, well, yeah, 2020 doesn’t look so hot for earnings except maybe the fourth quarter (we are in Q2 now and still in lock-down most places) but, boy, we expect 2021 to be a barn burner!

I would like to leave you with three charts. I provided these, along with greater granularity, to my Investors Edge subscribers last week. The first is one of many variations of the typical sine curve that smoothes out our view of bull cycles and bear cycles. I imagine you have seen something like this one before: 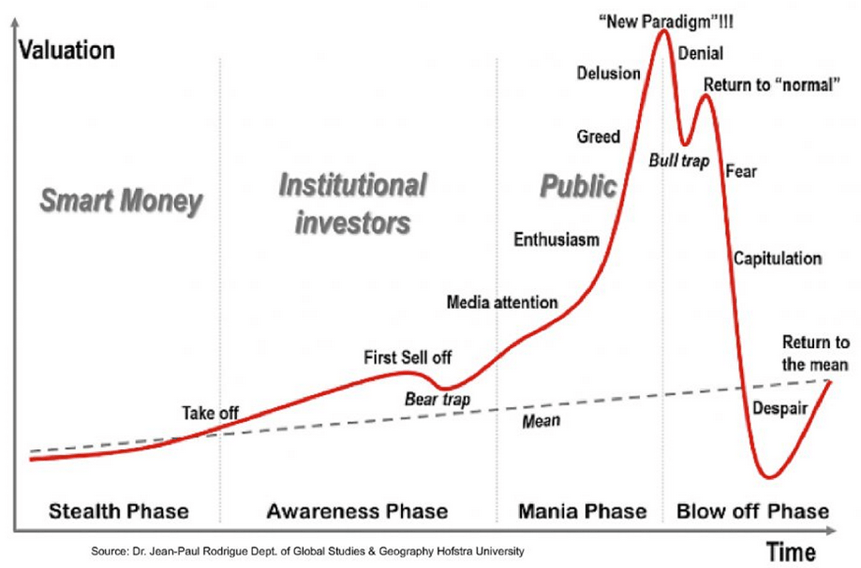 The take on the old view of these ever-exchanging cycles begins, as most do, as if we are coming out of a bear cycle. It “normally” takes time for investors to regain their confidence so those least burned by the bear, with cash to spend, are the only ones buying at first. Then a few join them, but are easily dissuaded by the first temporary decline.

But then the media cranks up and analysts are interviewed for their favorite stock picks, etc. Investors then get more confident, then confidence becomes cockiness (“Man, I’m really good at this stock-picking business.”) We reach the New Era phase, the market falls, and after a head fake to the upside or two, the fear of loss becomes capitulation, then depression.

The next chart is of the S&P 500 from the beginning of the bull cycle that began in March 2009 through last week. I created this using Yahoo Finance: 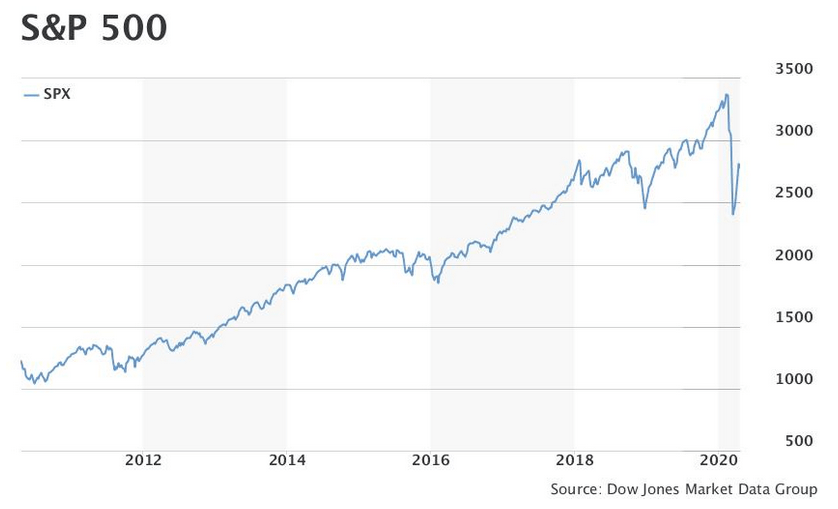 And now for the fun part. Or maybe not, if the composite history of other bear cycles proves prescient for this one. You can talk economics, technicals, fundamentals and so on all you like, but let’s face it: The market is a product of, a manifestation of, and a result of human emotion. I have placed my two charts from above side-by-side. I will let you draw your own conclusion, of course. I just find the parallels interesting enough, when combined with my reservations stated above, to ask “What if?”

On the left: My arrow points to the “Return to Normal” phase before the real decline. On the right: Where the S&P finished last week.

Find your optimal point where you can eat well —  *and* sleep well.  Helping you find that point is my most important goal at Investors Edge.

Additional disclosure: Unless you are a client of Stanford Wealth Management, I do not know your personal financial situation. Therefore, I offer my opinions above for your due diligence and not as advice to buy or sell specific securities.