Home Financial news This is How Democratic Presidential Candidates Are Thinking About the Economy These Days (Buttigieg Edition)
2019-11-092019-11-09By finanz.dk 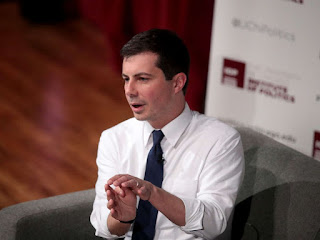 Democratic presidential contender Pete Buttigieg revealed his economic plan on Friday. Don’t be fooled by his baby face. It is the creation of a statist, who wants to rule over you.

It is about massive amounts of new federal government spending coupled with more aggressive government intervention across key sectors of the economy. It is about introducing more government planning into the economy and taking away choices and freedoms from the citizenry.

Specifically, the plan proposes an additional 2 trillion dollars plus in federal government spending over 10 years.

The plan calls for $500 billion to make college affordable for working and middle-class families. Translation: Under a Buttigieg administration, the crony relationship between colleges and universities and the government will expand.

The plan also calls for the spending of $50 billion in federal government-controlled workforce training and a $200 billion fund for worker training and transition.

Then there is $80 billion for an “Internet for All Initiative.”

There is $500 million in federal funds to develop and support a national network of 1,000 clusters and create additional matching funding for investment in innovative rural businesses.

His plan also calls for a $15 minimum wage, which will do nothing but eliminate opportunities for the least skilled.

He says he will grow unions and expand worker “protections” for gig workers, farm workers, and domestic workers. Translation: He would make it less desirable for employers to hire these kinds of workers.

In short, “economic policy” to Buttigieg is about nothing but more government spending, which will create more power centers that can be corrupted by those close to power. In addition, it will suffocate creativity and limit options, which in turn will lower the general standard of living.

Previous PostChina’s consumer prices rise at fastest clip in nearly 8 years, as pork prices continue to soarNext PostSE: USA, one of the most corrupt countries in the world Keiser Report in English & Spanish