They control the vast majority of the world’s oil and gas assets, yet the average person has never even heard of them, outside of those that are famous for things like getting attacked by missiles or becoming embroiled in a high-profile corruption scandal.

State-owned oil and gas companies (aka, the national oil companies, or NOCs) control at least US$3 trillion in oil and gas assets, compared to around $2.5 trillion as of 2017, and hold an estimated 90% of all known reserves–considerably more than publicly listed companies such as BP, ExxonMobil and Shell. Meanwhile, Saudi Aramco leads the pack as the world’s most profitable company.

That means that NOCs control about as much wealth as all U.S. billionaires or roughly twice the assets of global multilateral development banks.

If we go by annual revenue alone, China’s state-run Sinopec—explorer, producer, refiner, marketer and distributor—was the biggest oil and gas company in the world at the end of 2018. By net income, that title goes to Saudi Aramco, which reported net income in 2018 of $111.1 billion, compared to Sinopec’s $9.1 billion.

These numbers may seem a bit wild, but no one really ever knows where they come from or how they are derived.

Despite their economic importance, most of these 71 NOCs are notoriously secretive–Norway’s Equinor being one of the few exceptions. For the remainder of the NOCs, their opacity poses a significant fiscal and governance risk, especially when they carry huge debts.

The National Oil Company Database has listed at least 19 NOCs with assets in excess of $50 billion.

At least 25 NOCs account for 20% or more of government revenues, with Nigeria’s national oil company, the Nigerian National Petroleum Corporation (NNPC), collecting about half the general government revenues through oil and gas sales.

The database also reveals a pattern of weak public reporting by many NOCs, with only 20 of 71 NOCs revealing sufficient information for the 10 most critical indicators. More than half of the NOCs fail to publish financial statements audited by independent auditors, with some like the Republic of Congo’s SNPC failing to even disclose a balance sheet at all.

It’s often only when their debt loads become unsustainable that their true extent is revealed to the public, pushing the governments that had guaranteed the debts into a financial crisis.

NOC borrowing does have its benefits. The need to borrow can incentivize these oil and gas companies to develop healthy corporate governance practices in a bid to improve their credit ratings. A good case in point is Saudi Aramco’s recent bond issuance, which provided a rare peek into its financial performance.

Some NOCs such as Venezuela’s PDVSA and Angola’s Sonangol have debts exceeding 20% of the country’s GDP. Other NOCs are highly leveraged, such as Russia’s Rosneft and the UAE-headquartered TAQA. Mexico’s Pemex has negative equity. 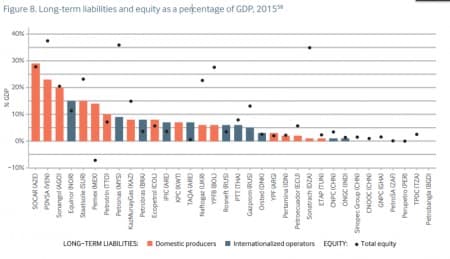 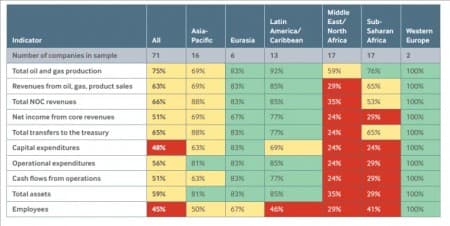 Nevertheless, maintaining healthy levels of debt and equity are not always enough. Consider Venezuela’s PDVSA, which despite holding 335 billion barrels of oil-equivalent reserves–the largest reserves of any NOC– is still unable to service all of its $35 billion of debt.  Related: Iran: We Won’t Agree To Any Production Cuts In The Future

All those riches are mostly locked underground, yet the company is unable to access them after years of mismanagement as well as the impact of sanctions and the economic crisis. Public debt figures of Venezuela and Mexico include debts by their NOCs, though debts by Brazil’s Petrobras or Bolivia’s YPFB are not included in their national debts.

Some NOCs such as Norway’s Equinor and Colombia’s Ecopetrol and have consistently delivered strong returns on public investment. Yet in too many countries NOCs have struggled to develop into commercially efficient actors, and in extreme cases have actively contributed to large-scale corruption, not to mention that they largely remain unaccountable for the role they play in climate change.

So, NOCs may control $3 trillion in oil and have the luxury of being entirely opaque and, in some cases, thoroughly corrupt, but their non-state-owned international oil company (IOC) brethren still tips the scales overall on revenue and income.

Where the IOCs lose out is politically because NOCs aren’t always about doing good business; sometimes, there about establishing a foothold somewhere even when it doesn’t make economic sense. That can equate to enormous power over time.

By Anes Alic for Oilprice.com