There is Plenty of Toilet Paper 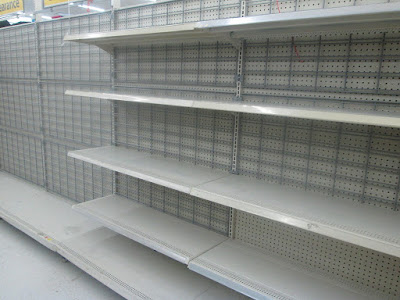 There are plenty of empty shelves in San Francisco. You can’t find any toilet paper or paper towels in any stores.

Some are blaming capitalism as if things would be different if Venezuelan president Nicolás Maduro were in charge.

The real problem is that the San Francisco government along with many other US governments is acting too much in the anti-free market authoritarian manner of Maduro. 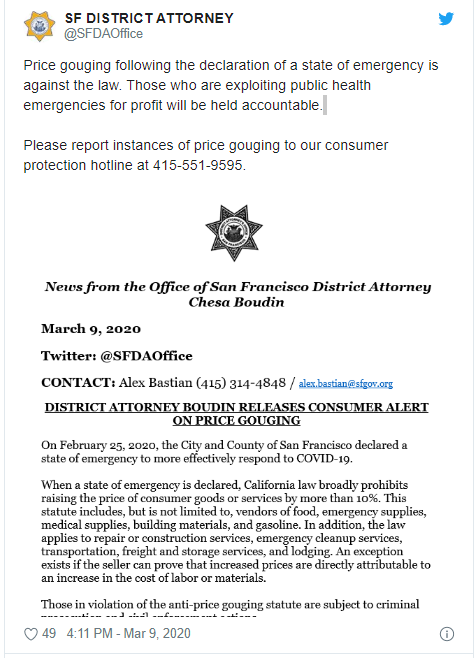 What a confused little man.

Maduro has price controls in effect and we all know how that is working out.

The current problem is one of distribution and incentives, both short-term and long-term.

In the recent past, most stores and consumers operated on pretty much “just in time” inventory when it came to toilet paper and paper towels.

This changed when the government started a panic over COVID-19. Some fearing a lockdown went to stores and grabbed as much toilet paper and paper towels as they could handle.

That left many more, well, shit out of luck, when it comes to toilet paper.

But the big problem is the anti-free market, anti-gouging rules.

People who have been selling toilet paper and paper towels for decades on a “just in time” inventory basis are not exactly, cutting edge, figure every angle entrepreneurs. They like steadiness and consistency.

I mean, they even understand this. The famous”don’t squeeze the Charmin” ads were built on the theme that grocers want steadiness and consistency—and certainly no one squeezing the Charmin.

If you want steadiness and consistency, you can have a nice life by being Mr. Whipple, but rarely are you going to become super-rich. That’s for the shrewd and aggressive.

When you have a supply line break, the Mr. Whipple’s of the world have no clue how to get aggressive about supply chains and pricing. They don’t want to, it is not in their blood.

What is needed is for the super aggressive to get working on the matter but they need to be motivated by money. A lot more money than the margin made by Mr. Whipple. You need the free market A Team working on this.

Government authoritarians like Boudin don’t get this. They consider free market, incentivized prices as “price gouging.” But when there has been a severe supply distortion for a commodity you want to buy, you really need sharp entrepreneurs to figure the angles and they are not going to do it for Mr. Whipple wages.

Consider my own situation. My just-in-time supply of toilet paper was running low. There is none, here in San Francisco, in supply at grocery stores or at any Walgreens or CVS stores.

So I had to think for a minute, then the solution came to me.

There are many restaurants that remain open in San Francisco but are operating on a “grab and go” basis. So my thought was, they must be packed with toilet paper that they aren’t using that they had in stock for in-restaurant dining. I will approach them and offer to buy some toilet paper.

The first two places I approached gave me a song and dance about why they couldn’t do it. There are just a lot of people who can’t think outside of routines.

Then I scored on my third try. I explained I wanted to buy some toilet paper. I told the owner, “I will pay good money.”

So the proprietor brought out a two-roll pack. The closet was close enough when he got the pack that I could see he had a full carton of toilet paper, 12 sets of 2 packs.

As I walked home, I thought to myself, San Francisco is filled with toilet paper in gyms to skyscrapers that are not being used. I thought of the angles I could use to gain access to that toilet paper for around $5.00 a roll.

I am pretty confident I could put a kid at a table on the sidewalk and sell them for $10.00 a roll, when you consider the alternative for prospective buyers. I think I could bank six figures every few days and take care of the asses of the masses.

But Boudin makes that impossible.

I have no incentive.

The masses will be wiping their asses with newspapers, at best, because Boudin thinks I would be gouging by hustling and figuring out the angles to free up the toilet paper that is out there that people want desperately.

Those of us that are good at figuring out angles will keep our lifestyles but for those of you who aren’t aggressive entrepreneurs, the socialists are going to make your lives miserable.