Two weeks ago in Renewable Energy Growth Continues At A Blistering Pace, I highlighted the inability of renewable energy to keep up with overall energy demand:

That shouldn’t be considered a knock on renewable energy. As the title implied, the renewable energy growth rate has been far greater than that of any other energy category. But because renewables are still a relatively small portion of our overall energy consumption, those huge growth rates aren’t yet translating into enough energy consumption to reduce global fossil fuel consumption. That means global carbon dioxide emissions continue to climb.

That leads me to the topic of today’s article. Last week someone asked me “Are you pro- or anti-nuclear?” To be honest, I don’t think of it in those terms. My thinking is more along the lines of “Can we meet global carbon dioxide emission targets without nuclear power?” I believe the answer to that is “No.” Related: Saudi Energy Ministry To Help Build $500 Billion Smart City

Today the U.S. and European Union are the areas with the world’s greatest nuclear power consumption, as well as the greatest dependence on nuclear power. Further, these regions have managed to reduce carbon dioxide emissions while reducing nuclear power.

According to the BP Statistical Review of World Energy 2020, the U.S. is by far the world’s largest consumer of nuclear power. Add France, and these two countries represent 45% of the world’s nuclear power consumption. 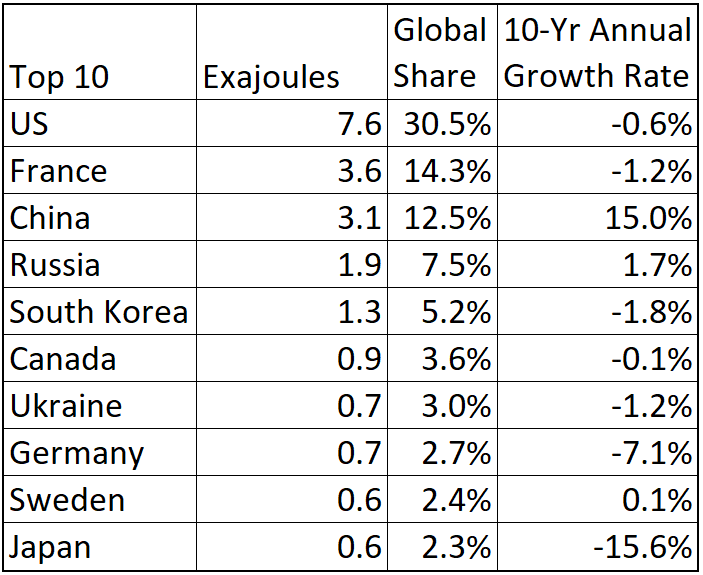 Thus, the question isn’t whether the U.S. or Germany can reduce carbon dioxide emissions without nuclear power, it’s whether Asia can.

Although global nuclear consumption has declined over the past decade by an annual average of 0.7%, last year global nuclear power consumption increased by 3.2%. This was the largest annual increase since 2004. For the second straight year China recorded the largest increment of any country. Japan also posted substantial growth of 33% as it continued to bounce back from the 2011 Fukushima accident.

After declining for several years after Fukushima, nuclear power in the Asia Pacific region has now risen by 70% in the past five years. China and Pakistan record double-digit annual growth rates over the past decade, with India not far behind at 9.2%. In contrast, EU nuclear consumption declined over the past decade at an average annual rate of 1.8%. U.S. consumption declined over that period at an average annual rate of 0.6%.

However, the developed world still has the greatest dependence on nuclear power. Below are 10 countries with the highest level of primary energy consumption derived from nuclear.

So the question really becomes whether the Asia Pacific region can continue to develop with renewables supplying the bulk of the new energy demand. Given the rapid growth of overall energy demand in the region, it appears highly unlikely that renewables alone can meet the demand. In recent years this has translated into a large expansion of fossil fuel consumption in these regions.

More nuclear power in developing regions could help supply growing energy demands without a continued explosion in the region’s carbon dioxide emissions. In fact, it may be the only solution that can reasonably achieve this objective.

Previous PostExxonMobil booted from the Dow after close to a centuryNext PostExclusive: ByteDance investors seek to use stakes to finance TikTok bid