The Unthinkable Cruelty and Inhumanity of the Coerced Shutdown 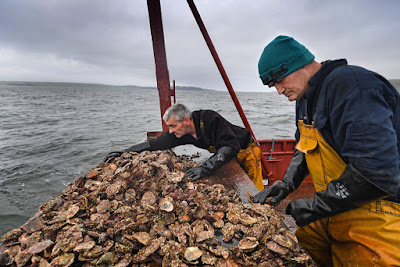 On Wednesday of this week a prominent oyster provider for D.C. area restaurants was forced to let 350+ workers go. Readers can likely imagine that more than a few lack any kind of familial safety net. It’s also not unreasonable to guess that many won’t be receiving a $1,200 check on account of the under-the-table nature of their employment.

Such is the cruelty of economic contractions care of overdone hysteria and political force. The reverberations are broad. The seen is the empty restaurants; that, or restaurants reduced to a fraction of their former capacity in the form of curbside takeout. The unseen is, among other things, the brutality endured by the suppliers of those restaurants. Sick-inducing is that the 350 workers mentioned above are but a fraction of the total number who will have to figure out ways to get by without a paycheck given the forced shutdown of all “nonessential” businesses in various parts of the country. That all too many of these businesses were open, and thriving not too many weeks ago, is a reminder that politicians have a different understanding of “essential” than do investors, businesses heads, and employees.

It’s hopefully a reminder of what a desperate situation businesses across the U.S. find themselves in. And by extension, existing and former employees of those companies. Assuming politicians cease their nannying whereby they disallow work and certain forms of commerce, will the existing and lost jobs still exist? Will the 350 laid off be able to return to what they were doing before? All too many in government are too out of touch to contemplate the previous question given the unique way in which they’re employed.

But for now it’s useful to tack however briefly to the virus that brought on all the hysteria that led to mass economic devastation. In asking readers to think about the virus, it should be stressed that this is not some blanket dismissal of the Coronavirus. Some say it poses little threat, some say it’s major. For the purposes of this piece, let’s assume major.

Precisely because the virus’s impact could be brutal and lethal in terms of health, it’s not unreasonable to say that people don’t need a law or laws telling them to be careful, to wash their hands, to be distant. Neither do restaurants and other service-oriented public places. Assuming lethality, it’s nor normally the goal of businesses to kill their customers, or employees. Since it isn’t, businesses of all stripes would have and could have moderated their operations and daily doings with health and wellness of employees and patrons top of mind.

Some restaurants might have gone full takeout on their own, others might have shrunk the number of tables served in order to space out customers, others might have instituted surge pricing to guard against big crowds.. Movie theaters, as opposed to shutting down, might have sold fewer tickets per theater, mandated separation of attendees, raised prices per ticket to limit demand, or perhaps a combination of all three. The main thing is that businesses succeed based on a demonstrated ability to meet the needs of patrons. Assuming more fearful customers, why hand over customer relations to politicians with one-size-fits-all solutions that amount to shutting operations down altogether? What a missed opportunity for businesses to learn how to operate in crisis conditions.

And what a missed potential opportunity for workers to innovate, as opposed to sitting unemployed based on the decisions of others. The others in this instance, mostly politicians.

Which brings us back to the 350 displaced workers mentioned at the beginning of this piece. Their situation is sad on so many levels for so many obvious reasons, including that there’s no guarantee that their jobs will exist once the forced shutdowns end. All of which raises a question of why politicians would be so heartless as to make blanket decisions that cruelly disrupt the hard-won employment of so many.

One reason might be that politicians and those who work in government haven’t a clue about the true meaning of shutdown. To understand why, readers need only think about the $2 trillion just summoned by Congress to dole out to individuals, businesses, and favored organizations. About the $2 trillion raised, the outrage of it isn’t discussed nearly enough. But it rates major comment. A federal government with powers “few and defined” somehow has the power to hand out $2 trillion? Something’s wrong with this picture, even though it’s easily explainable. Stated rather simply, the U.S. Treasury can summon trillions precisely because it has enormous present and future claims on the largest economy in the world. Basically the federal government can hand out $2 trillion to favored constituents based on it having previously arrogated to itself exponentially more of the present and future income of every single American.

All of the above must be said when trying to explain the why behind the cavalier attitude of politicians and government workers toward shutdowns. They don’t know what they are. No doubt they’ll claim that every so often non-essential federal workers are furloughed, but in light of the federal government’s taxing and borrowing power, these furloughs are nothing more than vacations that, when they end, come to a grand conclusion in the form of a big check to pay federal workers for the time when they were off the job.

While the 350 laid off oyster workers will likely receive very little severance, along with no assurance of future employment, those in the employ of the federal government get paid for all of their time off, health benefits, seniority income gains, you name it. To say all of this isn’t fair is to shoot fish in a crowded barrel. It’s much more than unfair. It’s downright cruel and inhumane.

John Tamny, research fellow of AIER, is editor of RealClearMarkets. His book on current ideological trends is: They Are Both Wrong (AIER, 2019)