The central thesis of my new book Will You Be Richer or Poorer? is the financial “wealth” we’ve supposedly gained (or at least a few of us have gained) in the past 20 years has masked the unraveling of our intangible capital: the resilience of our economy, our social capital, i.e. our ability to find common ground and solve real-world problems, our sense that the playing field, while not entirely level, is not two-tiered, and our sense of economic security–have all been shredded.

The unraveling of everything that actually matters is quickening. While every “news” outlet cheerleads the stock market (“The Dow soared today as investor optimism rose… blah blah blah”), our “leadership” and our media don’t even attempt to measure what’s unraveling, much less address the underlying causes.

The hope is that if we ignore what’s unraveling, it will magically go away. But that’s not how reality works.

The unraveling is gathering momentum because prices have been pushing higher while wages lag, feeding the rising precariousness and inequality of our economy. The connection between people losing ground and social disorder/disunity has been well established by historians such as Peter Turchin Ages of Discord and David Hackett Fischer The Great Wave: Price Revolutions and the Rhythm of History.

In our era, trust in the legitimacy of our institutions is unraveling because the statistics presented as “facts” are so clearly designed to support the status quo narrative that everything’s getting better every day in every way rather than the politically unwelcome reality that the bottom 95% are losing ground and whatever they do earn and own is increasingly at risk from forces outside their control.

Economic decay leads to social and political disorder / disunity. The sudden rise of vast homeless encampments is one manifestation of the social fabric unraveling. In the political realm, the insanity of accusing Democratic candidates of being “Russian agents” matches the hysterical destructiveness of the McCarthy era in the 1950s.

It all starts with economic decay, so let’s look at some charts. Here’s a chart of income inequality which helps drive wealth inequality.

Note that the only group that benefited from the past 20 years of speculative bubbles is the top 1%. The whole idea that inflating bubbles creates a “wealth effect” that “trickles down” is preposterous, as evidenced by the decline of the middle 60% of households while the speculators and owners of bubble-assets skimmed the vast majority of income gains. 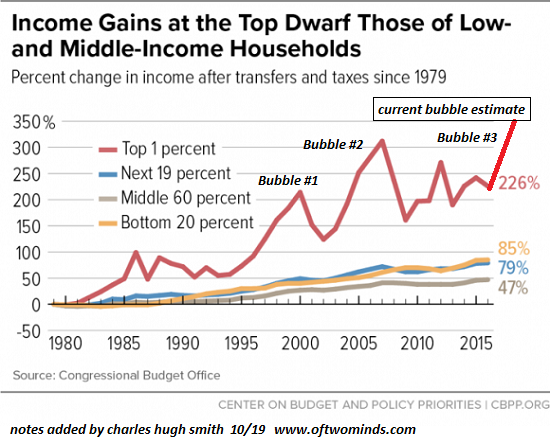 Meanwhile, we’re told inflation is less than 2% annually while rising costs have outpaced meager wage increases. What’s a more realistic measure of real-world inflation–the official Consumer Price Index (CPI) at 18% over ten years or rent and healthcare at 34% and 45%? 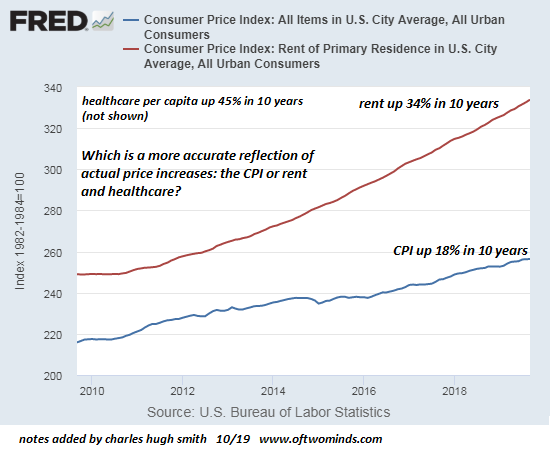 According to the Chapwood Index, real-world inflation in urban America is running 9% to 13% annually. This is more in line with reality than the bogus CPI, as evidenced by this chart of wages and healthcare costs:

Even if we don’t measure the erosion of intangible capital, the social and political consequences of this impoverishment are manifesting in all sorts of ways: large-scale social disorder is breaking out around the globe, and the political middle ground has completely vanished: no matter which way an issue is decided, one camp will refuse to accept the outcome.

The only way forward with any chance of success is to start by acknowledging the decay of our economy due to rampant financialization, legalized looting, the pathologies of “winner take most” speculation and the realities of a two-tiered system in which entrenched elites are “more equal” than the rest of us, economically, socially and politically. We have to accept the limits of technology to reverse the unraveling and assess the damage that’s already been done to our shared capital.

Acting as if the system is working just fine and the problem is perception/optics is accelerating the unraveling.

There’s more in my new book Will You Be Richer or Poorer? Profit, Power and A.I. in a Traumatized World. Read the first section for free (PDF).