The U.S. Consumer Is Bowed, Not Broken

Russ discusses why consumption has held up, and how the pandemic has accelerated long-term trends.

It is hard to imagine a more rapid, devastating and pervasive blow to U.S. households than the pandemic. Abruptly shutting most economic activity has led to a record high unemployment rate. In actuality, the numbers are even worse than the headline rate suggests given a record drop in labor force participation and rise in the number of furloughed employees.

But while the labor market will take years to fully heal, households are demonstrating surprising resiliency. Auto sales rebounded sharply in May and there are other signs of households emerging from their induced hibernation. Here are three reasons why the U.S. consumer remains bowed but not broken.

After plunging in March, real personal income surged in April, up nearly 14% year-over-year, on the back of multiple stimulus packages. While this is temporary – transfer payments in April rose 97% versus a year-ago – fiscal stimulus is having the intended impact: cushioning the blow to households (see Chart 1). 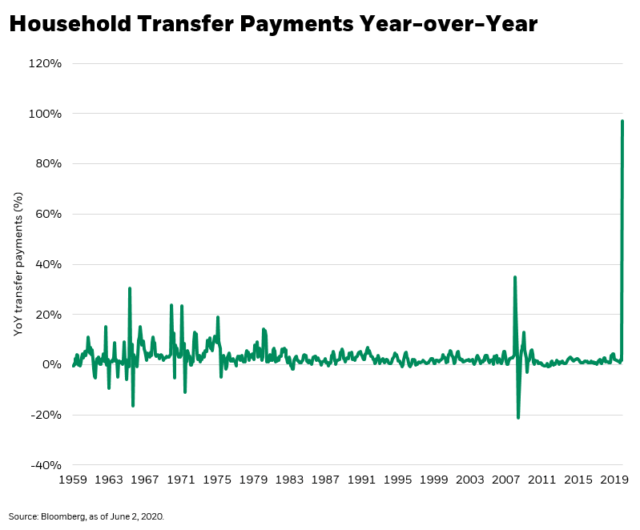 Unlike the prelude to the financial crisis, consumers entered the pandemic in solid shape. Household wealth stood at a record $118 billion at the end of 2019. While wealth clearly dropped in the first quarter, the rapidity of the equity market rebound has limited the damage. At the same time, consumer debt is low and falling. Personal debt is below 100% of disposable income, the lowest since the early 2000s. Not only are debt levels manageable, but given near zero interest rates, the cost of servicing debt is the lowest since at least 1980.

Housing remains resilient, a critical support given that a family’s home is typically their largest asset. While housing starts and purchases have plunged along with every other economic indicator, preliminary evidence suggests values are holding in most markets. Supporting home prices: better affordability on the back of record low 30-year mortgage rates.

The crisis as an accelerant

Apart from the level of consumption, equally important is where consumers spend. In many ways, the pandemic has served to accelerate pre-existing trends. Looking through U.S. credit card data reveals an obvious pattern: parts of the future are arriving faster than planned. Online sales channels have been capturing roughly 60% of wallet share, and market share is holding, even as lockdown restrictions start to fade.

As American families attempt to resume their lives, it is becoming clear that habits engendered by the crisis are likely to prove long lasting. Going forward, even under what will hopefully be a return to a more normal existence, consumers are likely to spend more of their lives, and money, online.