The Trump Expansion of State Science 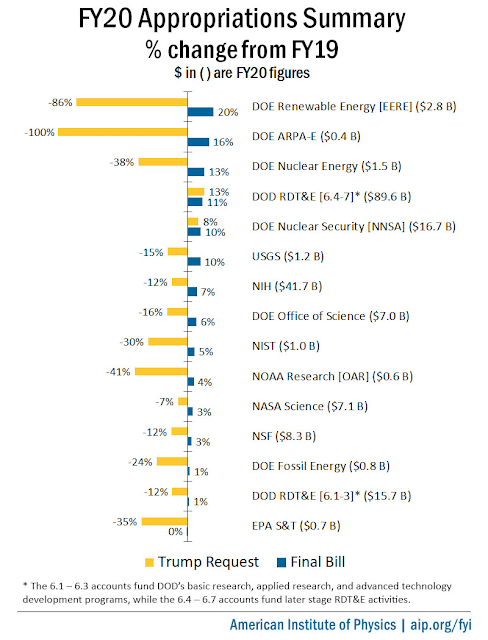 Late in 2018, Donald Trump signed into law the National Quantum Initiative Act, which authorized the government to create centers on quantum computing. Many such laws are passed, and they usually mean little. There’s a big difference between authorizing – which allows an agency to do something – and appropriating, which means funding it. An authorized program is a wish, a funded program is a priority.
Usually, something like the National Quantum Initiative Act would have been relegated to that of a wish. That’s what happens to lot of authorized programs in an age of austerity. Members of Congress get to brag about passing something but nothing actually emerges into existence because Congressional appropriators refuse to write the check. Jeff Connaughton wrote about a particularly toxic example in his book The Payoff, in which Senator Ted Kaufman helped pass a law authorizing a financial crimes prosecution unit during the height of the financial crisis, but the Senate Appropriator Barbara Mikulski refused to fund it.
Surprisingly, however, the Senate followed through on the quantum computing law, with appropriators putting in a request for $195 million in the funding bill (see p. 112). The final bill that passed last month will add this money and more to quantum computing research through a variety of government agencies (specifically the National Science Foundation, the National Institute of Standards and Technology and the Department of Energy Science Office).

This chart on spending is from the American Institute of Physics, which shows an interesting shell game.

The Trump administration has been asking for deep cuts in science agencies every year through its formal budget requests, but in practice has been bumping up spending on science fairly dramatically. They play act libertarian but spend like they are trying to have the government do something...

Even more interesting is a provision passed last month to have the U.S. government explicitly subsidize exports in areas in which China has staked out a claim to global leadership. This is being done through the Export-Import Bank, which has to set up a “Program on China and Transformational Exports” to neutralize Chinese subsidies by having the government offer competitive American financing subsidies in every hot button industrial area: AI, biotech, 5G, quantum computing, renewable energy and batteries, semiconductors, fintech, and water treatment.

And then there’s 5G, the communications technology which will serve as the platform for future mobile networks and data transmission. I’ve written about how the U.S. used to lead the world in telecommunications, but now we have no telecom equipment makers to compete with Chinese giants Huawei and ZTE. It turns out the Trump administration has noticed, and is trying to do something about it by moving money to Nokia and Ericsson, European rivals of Huawei.