During Saturday’s ‘Coronavirus: Myths and Realities Symposium,‘ where I was a participant, I presented three charts that I originally published in the EPJ Daily Alert.

The charts show 13-week annualized money supply growth since the start of the COVID-19 panic compared to some other periods. The method I used to calculate the growth is the one that I outlined in The Fed Flunks: My Speech at the New York Federal Reserve Bank.

The first slide shows money supply growth since the start of this year compared to previous years starting with the year 2012. 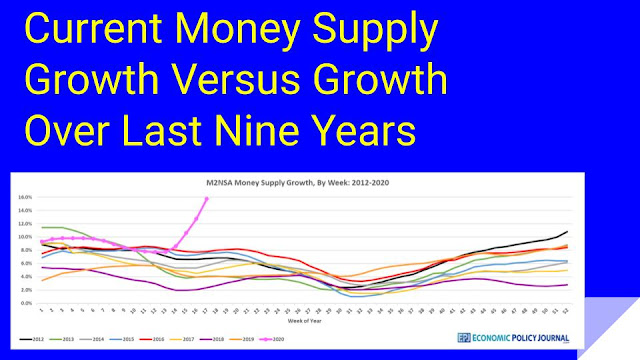 As can clearly be seen money supply growth has skyrocketed over the last 4 weeks.

The next slide shows 13-week annualized money supply growth since 1981. 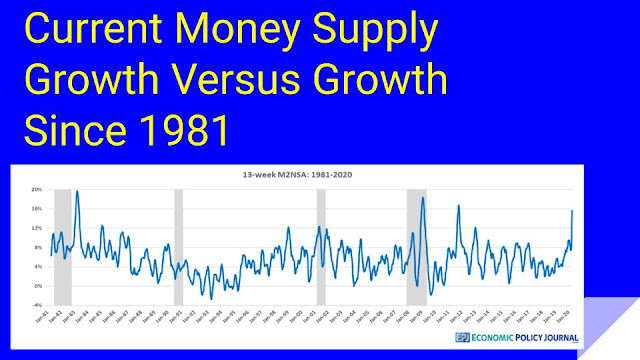 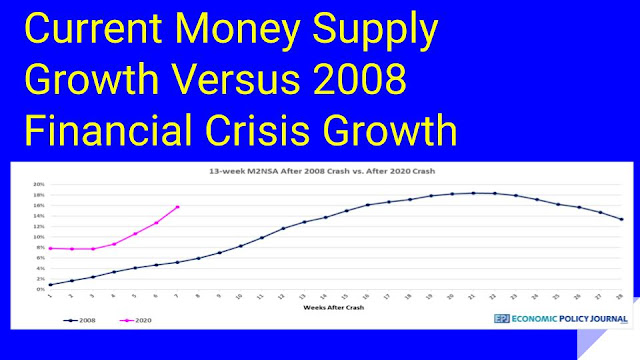 As can be seen, the 2008 Ben Bernanke money pump started from a much lower money supply growth rate than the current money pump.

In 2008, money supply growth was near zero, however, at the start of the current COVID-inspired money pump, money supply was already climbing at a rate of 8.0%. Since then, in the last 4 weeks, it has essentially doubled to 15.7%.

This is startling money growth and as can be seen in the chart, the current money growth climb is much steeper than it was in 2008.

I expect current growth to eventually surpass the money growth peaks of the Great Recession and the Volcker money pump, since the US government continues to launch massive amounts of new spending that the Federal Reserve is for the most part monetizing.

At a time when this type of money printing is not matched by increases in productivity–if anything we have negative productivity–the upside money demand pressure on products that will be bought (as opposed to products such as cruise line tickets that may not be bought) is going to be enormous.

Conservatively, I expect price inflation to hit the 5% to 7% levels but I won’t be surprised if it climbs much higher (with the one caveat that out of the gate when the lockdowns are over that government prices indexes are not likely to pick up the full price inflation advance on things we are buying because the index will pick up price discounts that we may not be buying such as cruise line tickets.)